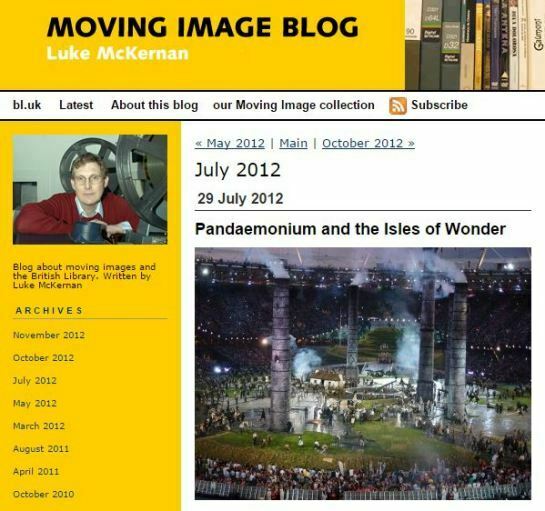 This website has had a bit of a redesign, chiefly to make it responsive so that I no longer have to peer at minute print whenever I look at one of the posts on my mobile phone. A few more tweaks are required, but in general I’m pleased with the template and the results.

I’ve taken the opportunity of this change to start something that I’ve long thought about doing, which is to republish posts from others blogs that I’ve managed in the past (there have been a few), so that I can make this site a home to the greater part of my online writing. It was back in 2012 when, firstly, I became frustrated with only writing about silent films for my Bioscope blog, and secondly, I came up with a post on the Olympic Games opening ceremony which I was quite pleased with, but I had no home for it except a British Library site where it really didn’t belong.

So it was that I abandoned the Bioscope and converted the static site www.lukemckernan.com that I had had for some while into a combination of blog and personal site, covering whatever subjects might come into my head. Part of the plan always was to incorporate older posts from those other sites, but it has taken until now to get round to it.

I’ve started by adding some posts from my defunct British Library Moving Image blog. They are still online at the BL site, as well as having been archived by the UK Web Archive and the Internet Archive, but they are so hard to find even if you know that they are there to seek out, and they are not all under the one umbrella. So I’ve brought some of them here – only a few, because most of what I wrote for the BL site was of passing interest or just downright poor. What I’ve also done in adding them to this blog is make their publication dates the same as they were originally published (i.e. I’ve converted the date field in the WordPress CMS), so all of a sudden this blog stretches back to February 2010 instead of its supposed starting point of September 2012. A gloss note at the end of each of these posts explains what has been done. And of course I’ve tagged and categorised them so that they can be discovered alongside similar stuff written subsequently.

The posts that I’ve added are:

This won’t be the end of it. I plan to add some of the posts that I like – and that work as pieces of writing on their own – from the Bioscope blog. They will still be on the Bioscope, which remains online as an archive (a well-visited one too) even though I stopped writing for it back in 2012, but they will be here too – the selected works, if you will. And so this blog will end up stretching back to 2007, as I retrofit my online world to how I would now like it to be. I think it’ll be alright,