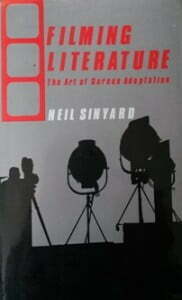 Here’s number 2 in an occasional series that reviews unfamiliar or neglected books on film. This time we take a look at Neil Sinyard, Filming Literature: The Art of Screen Adaptation (London/Sydney: Croom Helm, 1986).

“The legacy of the nineteenth-century novel is the twentieth-century film”.

The opening line of Neil Sinyard’s Filming Literature is typical of the work as a whole – a witty and wise observation, broad in its remit, bold in its assumptions, elegant in its expression. This has long been one of my favourite film books, one to which I can come back time again for useful insights and guidance on a subject which I find endlessly fascinating, the relationship between literature and film. The book seems little known, and may have been hampered by a dreadful cover and a minor publisher that long since went out of business. But I would urge anyone with an intelligent interest in film or literature to seek it out, or simply if you take pleasure in fine writing.

Its subject is, therefore, the relationship between film and literature. This is a field where one can go back and forth endlessly, and where many a writer has got bogged down in attempting to identify the minutiae of differences between the book and the film of the book. Sinyard avoids such traps, taking a broader view of how and why such films are made. His style is approachable, unburderened by theoretical language (while remaining aware of theory), and shows equal ease with literature and film.

He does not attempt to cover the whole field. The focus is on English-language literature to begin with, and the chapters focus on significant themes and examples. So we get chapters on Shakespeare, Henry James, D.H. Lawrence and Thomas Hardy, George Orwell, Harold Pinter’s The Go-Between, James Agee’s film criticism, analogies between the film and literary artist (Dickens/Chaplin, Twain/Ford, Greene/Hitchcock, Conrad/Wells), adaptation as criticism (looking at Great Expectations, Death in Venice, Barry Lyndon and The French Lieutenant’s Woman), bio-pics, and finally film and theatre. Sinyard’s great gifts are to understand equally the literary and filmmaking processes, to be able to call upon a wide range of film examples, and to come up with ideas that delight with their originality and expression. Here are some choice examples:

“The extraordinary opening chapter of Joyce’s A Portrait of the Artist as a Young Man, with its free movement between time and space, is one of the finest examples of montage in fiction.

It is axiomatic that very few directors have become successful writers – Elia Kazan is a notable exception – whilst even Burt Reynolds and Sylvester Stallone can make technically competent directors.

Olivier’s Richard III (1955) is a splendid film, but it is a shame that the crowd scenes … seem so sparsely populated, like friends gathering glumly for a thinly attended Equity meeting.

Film lovers must find many of Orwell’s remarks about the cinema distasteful and glib … Dismissing popular cinema as ‘treacly rubbish’ is no substitute for a serious consideration of how films work and why they give so much pleasure to so many people … It brings out the negative side of Orwell’s posture as the honest, commonsensical man: an occasional philistinism and impoverishment of imagination, and unintellectual conservatism about new art forms and alternative modes of expression to realism.

Film reviewing was no routine chore for him, but the culmination and fullest expression of his maturity as a writer. The film criticism of the 1940s is the heart of Agee’s achievement, with his work in the following decade developing out of it and his work in the preceding decade seeming an important preparation for it.

Kane and Kurtz are both men of limitless but frustrated potential … Both men are disappointed with the world they find and compensate by building their own isolated monarchies.

[T]he spirit of James is elusive, distilled as it is in a sensbility and style essentially attuned to an era before the film age. Still, this is a matter more of record than regret. A cinema that has produced its own rosebud need not lament the absence of a golden bowl.

And so on. Sinyard makes you want both to reach up to the bookshelf and to put on a DVD. You want to read again and to see again. He illuminates and intrigues. Seek out his argument of why One-Eyed Jacks is a Hamlet-derivative, or his discussion of the parallels between Great Expectations and Sunset Boulevard. There, you see – you are just going to have to take a look at them again.

Note: Originally published on the Screen Research network and then on the British Library’s Moving Image blog, 15 March 2010, and reproduced here with slight emendations.