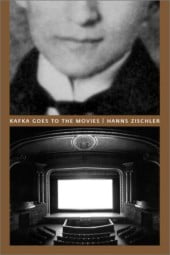 Here’s number 3 in an occasional series that reviews unfamiliar or neglected books on film. Today’s choice is Hanns Zischler, Kafka Goes to the Movies (Chicago/London: University of Chicago Press, 2003).

Was at the movies. Wept. Lolotte. The good pastor. The little bicycle. The reconcilitation of the parents. Boundless entertainment. Before that a sad film, Catastrophe at the Dock, after the amusing Alone at Last. Am completely empty and meaningless, the electric tram passing by has more living meaning. (Kafka’s diary, September 1913)

This unique book has received ample praise, so it is hardly obscure, but it remains little known among the general film readership. Though not a casual read, it is mysterious, learned, engrossing, and beautiful to behold.

Its author is a German film actor with a taste for literary history. Its subject is Franz Kafka, author of Metamorphosis, The Trial, The Castle and inveterate moviegoer in his younger days. In 1907 the first permanent cinema was built in Prague, and soon among the enthusiastic cinemagoers of the city were Kafka (born 1883) and his friend Max Brod. From the diaries, letters and other writings of Kafka and Brod, Zischler traces the films that they saw, sometimes from just the vaguest hint of a title or plot, identifies the originals, finds reviews, stills, posters, and on occasion tracks down the films themselves.

But this is no mere exercise in producing an anecdotal filmography. Zischler is interested in what is revealed of Kafka in his impressions of cinema, how the cinema reflected his psyche, and the interelationship between the fevered world of early cinema and Kafka’s own emerging artistic vision. In the background there is the home of the cinema, the modern city, endlessly stimulating, bombarding its inhabitants with images.

From fragmentary evidence Zischler leads us to detailed descriptions and analyses of such titles as The White Slave Girl, Nick Winter and the Theft of the Mona Lisa, Theodor Korner, Danzig, The Other, Hamlet (with Albert Bassermann), The Heartbreaker, Little Lolotte, Catastrophe at the Dock, Return to Zion, The Kid and several others, seen by Kafka between 1908 and 1921. He provides a filmography (noting which titles survive), and places the experience of each film within a particular point in Kafka’s personal and artistic life.

On one level it is trainspotting with a heavy dash of cultural theory. On another, its bringing together of the everyday with the imaginary (much like the experience of cinema-going itself) makes for a thrilling read, particularly as one gets carried along by the detective work, as a fleeting mention of a film subject in a letter leads to an advertisement in the contemporary press, then to the film title, then to the film itself and back to Kafka’s personal history.

Kafka Goes to the Movies is a pleasure to look at, and has particularly attractively arranged notes pages (which include illustrations). Zischler has gone on to repeat the trick with James Joyce, documenting not so much Joyce’s renowned though brief period as a cinema manager in Dublin in December 1909, but rather his first documented experience of filmgoing in Pola (then part of the Autro-Hungarian Empire, now Pula in Croatia) in 1904. Unfortunately (for monolingual me at any rate) the book, Nase für Neuigkeiten, published in 2008, is only available in German.

Note: Originally posted on the Screen Research network and then on the British Library’s Moving Image blog, 29 March 2010, and reproduced here with slight emendations.