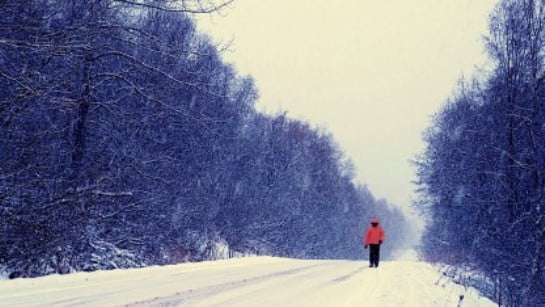 Memory is an entirely personal thing. What we call our memories are constructions of the brain which alter according to time and circumstance. They are not objective, and they do not correlate exactly with reality, as any court of law can demonstrate. One person’s memories will never be precisely the memories of another person. Notions of collective or cultural memory are therefore nebulous concepts, more socio-philosophical than anything neural, yet they are powerful notions for all that because they demonstrate to us how we are connected to other people. They trigger a collective feeling, even while those who share in such memories will each see that which is recalled a little differently, in their own personal way.

This tension between the personal and the collective seems to lie at the heart of John Akomfrah’s remarkable film-essay Mnemosyne, which is on show at the BFI Southbank until 30 August. Originally presented at The Public in West Bromwich, the film gained such acclaim, from writers as varied as Ken Russell and Sukhdev Sandhu, that it has been brought to London. Anyone interested in the unique power of film to conjure up more than words can say should try and get there.

John Akomfrah is a co-founder of the Black Audio Film Collective, whose best-known work is the seminal Handsworth Songs (1986). Like that film Mnemosyne explores black experience in a real and an imagined Midlands territory. In Ancient Greek mythology Mnemosyne was the personification of memory, as well as the mother of the nine muses, and the film is divided up into nine sections, one per muse. Its visual style is extraordinary. It combines startlingly beautiful images of an unnamed far northern territory dominated by ice and snow, in which solitary figures stand with backs to camera, with archive film of the black community in the Midlands taken from the archives of the BBC, the Media Archive of Central England and Birmingham Central Library.

This is what is especially hanting about the film, the way in which it takes archive film originally produced for documentaries, news pieces, promotional films and such like, and turns it into something mysterious, real and quite unreal at the same time. The many images of snowbound streets and cars take on an extraordinary contemplative quality. The images do not speak alone for themselves, however. Akomfrah overlays his melange of present and past film with quotations from Milton, Beckett, Homer, Nietzsche, Sophocles, Shakespeare, Pound, Cummings and others. Sometimes these touch on themes of migration, or exile; often they are more elusive, and more personal to the filmmaker. Sometimes there is an obvious connection with the muse in question, such as the disco dancing for Terpsichore or the haunting use of Leontyne Price singing ‘Motherless Child’ for Polyhymnia (muse of choral poetry). At other times it is bitterly ironic, as in the use of Enoch Powell’s ‘rivers of blood’ speech (delivered in Birmingham) placed under Thalia, the muse of laughter.

Mnemosyne is clearly ‘about’ the immigration of black and Asian communities to Britain and the hostile and alienating reception so many received. It is filled with great sorrow. But it also seems to be about the shifting nature of archive film itself, which signifies different things from those elements it originally meant to record (such as the film’s factory scenes, snowbound traffic, canal journeys and interviews with little Englanders) as time moves on and perceptions alter. Mnemosyne shows that film, like our memories, is ever-changing, recording some sort of a historical reality but at the same time capturing something altogether more mysterious, forever open to interpretation.

Note: Originally published on British Library’s Moving Image blog, 3 August 2010, and reproduced here with slight emendations. The film was adapted from its original installation form under the release title of The Nine Muses (2010). It can be viewed on the BFI Player (rental).