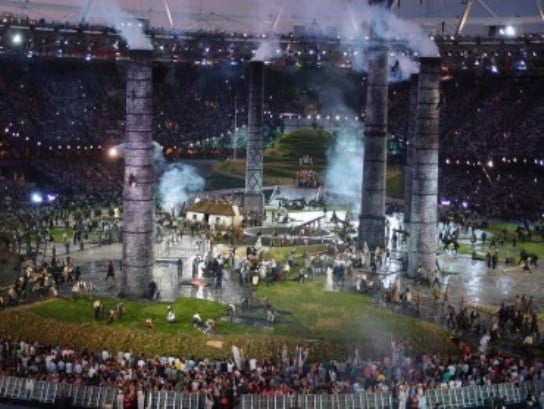 Frank Cottrell Boyce, the writer behind ‘Isles of Wonder’, the extraordinary and widely acclaimed opening ceremony for the 2012 Olympic Games, has revealed in a Guardian article that a major inspiration for the work was Humphrey Jennings’ Pandaemonium. Of the creative process with director Danny Boyle he writes:

We shared the things we loved about Britain – the Industrial Revolution, the digital revolution, the NHS, pop music, children’s literature, genius engineers. I bought Danny a copy of Humphrey Jennings’s astonishing book Pandemonium for Christmas and soon everyone seemed to have it. The show’s opening section ended up named “Pandemonium”.

‘Pandaemonium’, as the BBC commentary noted on the night, was the name that John Milton gave to the capital of Hell in his epic poem ‘Paradise Lost’. It is also the title of Humphrey Jennings’ posthumously published book which is a collection of nearly 400 contemporary texts dating 1660-1886 that, as the book’s subtitle puts it, illustrate ‘the coming of the machine as seen by contemporary observers’.

Humphrey Jennings (1907-1950) is generally recognised to be among the greatest of all British documentary filmmakers. In films such as London Can Take It! (1940, co-directed with Harry Watt), Listen to Britain (1942, co-directed with Stewart McAllister), Fires Were Started (1943) and A Diary for Timothy (1946), Jennings documented the relevance of the British experience of war to history, art, society and culture. Often described as a poet among filmmakers, he applied a poet’s synthetic vision to the British condition at a time of national crisis. If you have not knowingly seen one of his films, you will have undoubtedly come across sequences from them, because they have been ceaselessly plundered by television for footage illustrating the impact of the war on Britain. For example, Andrew Marr’s piece on the history of London that featured as part of the BBC’s build-up programme ahead of the opening ceremony used several shots from London Can Take It!

That poet’s synthetic vision was also applied to Pandaemonium, a collection of texts (or Images, as Jennings described them) which he worked on between 1937 and his accidental death in 1950, without ever shaping the material into a finished manuscript or finding a publisher. It was not until 1985 that his daughter Mary-Lou Jennings and Charles Madge (like Jennings a co-founder of the social investigation organisation Mass-Observation) edited a version of the work that was close as could be hoped to Jennings’ conception.

Pandaemonium comprises texts from poets, diarists, scientists, industrialists, politicians, novelists and social commentators who wittingly or unwittingly document the great changes wrought in British society by the industrial revolution. It begins with Milton’s description (written c.1660) of the building of Pandaemonium, and anyone who saw Boyle and Boyce’ vision of Glastonbury Tor, from which burst forth fire as the tree at its top was uprooted, ushering in the industrial revolution will recognise its inspiration in Milton’s opening words:

There stood a Hill not far whose grisly top
Belch’d fire and rowling smoak; the rest entire
Shon with a glossie scurff, undoubted sign
That in his womb was hid metallic Ore,
The work of Sulphur. Thither wing’d with speed
A numerous Brigad hastens. As when bands
Of Pioners with Spade and Pickaxe arm’d
Forerun the Royal Camp, to trench a Field,
Or cast a Rampart. Mammon led them on,
Mammon, the least erectd Spirit that fell
From heav’n, for eve’n his looks and thoughts
Were always downwards bent, admiring ore
The riches of Heav’ns pavements, trod’n Gold …

The quotation at the head of this post comes from notes Jennings wrote for an introduction to the work, and it confirms the influence Pandaemonium had on Danny Boyle and his creative team (not least in their sly critique of the corporately-sponsored Olympics themselves, with the Olympic rings being forged in the furnaces of the dark Satanic mills). Pandaemonium has been built, and continues to be built – the task is to transform it into Jerusalem. So Boyle and Boyce do not look for a return to that green and pleasant land portrayed at the start of ‘Isles of Wonder’. Instead they look with hopes toward what has and can still be built out of it, to fulfil the vision expressed in William Blake’s ‘Jerusalem’.

Vision is the operative word. In his introduction (as reconstructed by Charles Madge), Jennings says that his Images, whose construction he likens to ‘an unrolling film’, illustrate ‘the Means of Vision and the Means of Production’. The Industrial Revolution he sees as the victory of Production over Vision, of materialism over poetry, which has failed to keep up with, or to master, the changes brought about by industrialisation:

It would take a large work on its own to show, in the great period of English poets 1570-1750, the desperate struggle that poets had to keep poetry’s head into the wind: to keep it facing life. But by 1750 the struggle – like that of the peasants – was over. In other words poetry has been expropriated.

Boyle and Boyce were inspired by Jennings, but they also sought to show how the argument has moved on since Jennings’ time, to show that there could be a greater balance between production and vision. ‘Isles of Wonder’ was divided into three main sections (with comic interludes featuring the Queen and Mr Bean). The first, ‘Pandaemonium’, showed the march of industrial society over the green and pleasant land, but also the changes in society that the process unwittingly led to – women’s suffrage, Jarrow marchers, the Empire Windrush, the Beatles. The second, ‘Second Star on the Right and Straight on Till Morning’ took children’s literature as its theme, pitting its villains (Cruella De Vil, Lord Voldemort) again the forces of collective good, represented by the NHS and a host of Mary Poppinses. It can also be seen as representing the revival of poetic sensibility and responsibility, the human urge towards the greater good, defeating the forces of Mammon. From thesis to antithesis to synthesis, and the third part, ‘Frankie & June say …Thanks Tim’ finds great hope in another revolution, the digital revolution (Tim being Sir Tim Berners-Lee, inventor of the World Wide Web). Here an interconnected society, themes from which we had seen prefigured in the earlier parts, overrides the forces that have divided it in the past, moving forward to – perhaps – Jerusalem.

Extract from Listen to Britain

Humphrey Jennings could never have conceived of such a spectacle as ‘Isles of Wonder’, but he might have understood the technique, not least with reference to his own documentary films. Listen to Britain (which could almost have been a subtitle for ‘Isles of Wonder’) is a portrait of national unity illustrated through the songs and sounds of a country at war. There is no narration, only images of the different corners of the land and different strata of society, bound together by effort and by sound (factories, Myra Hess playing piano at the National Gallery, variety entertainers Flanagan and Allen). Spare Time (1939), a film closest in conception to Jennings’ brief involvement with Mass-Observation, shows how Britain’s working class enjoys its leisure time, from pubs to wrestling matches, from allotments to marching kazoo bands. Such films succeed through a subtle association of ideas, one image illuminating the next by association. As with his films, so it was with the unrolling film of Images in Pandaemonium, and now with ‘Isles of Wonder’

If you’re trying to celebrate a nation’s identity, you have to take things that are familiar parts of the landscape and make them wonderful.

So writes Frank Cotterell Boyce, and they are words to explain the art of Humphrey Jennings as well. It is what a great documentary filmmaker can do: capture images of common stuff, and transmute them into something wonderful. To do so, it is necessary not just to photograph your subject well, or to edit with a satisfying rhythm. You must have a governing idea to give those images meaning. Humphrey Jennings wanted to see Jerusalem built once more; Danny Boyle and Frank Cottrell Boyce have encouraged us all to dream of the same.

(And would you believe it, the name of the 11-year-old boy who sang ‘Jerusalem’ at the start of ceremony was … Humphrey. “While I think his voice is brilliant, I admit I wasn’t sure why they picked him at first” says Humphrey Keeper’s schoolteacher in a Times interview.)