Xinhua, China’s state news agency, announced this week what was claimed to be the world’s first AI news anchor. It presented to a conference in Wuzhen two virtual anchors, each derived from human newsreaders working for Xinhua. There was a Chinese-speaking anchor, based on Qiu Hao, and an English-speaking anchor, based on Zhang Zhao. Both anchors are dressed soberly in suits and tie, exuding authority and sobriety while reporting on the news of their own creation. In a Chinese TV news story a bemused human Qiu Hao is seen being interviewed while watching his virtual self.

The anchors have been created by Xinhua and Chinese search engine Sogou using machine learning techniques, absorbing the characteristics of the humans to create their unsleeping avatars. As Qiu Hao’s digital substitute informs us:

Not only can I accompany you 24 hours a day, 365 days a year. I can be endlessly copied and present at different scenes to bring you the news.

Some human newsreaders who need to sleep will now be losing sleep, ironically enough.

This is not the world’s first AI news anchor, however. At last year’s ‘Robots’ exhibition at the Science Museum we saw Kodomoroid, the eerily lifelike android created by Japanese professor of robotics Hiroshi Ishiguro. She was launched in 2014, and is said to have a sense of humour to match her perfect language skills. In this YouTube video she tells us that in the future she would like to be a newscaster, and is open to any job offers. 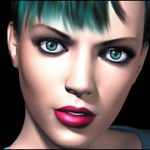 Moreover, back in the digital dark ages of 2000, we had Ananova (left). Developed by the Press Association, but bought soon after by telecoms company Orange, Ananova was a blue-haired, multi-lingual, 3D, computer-generated newsreader, who enjoyed a four-year life via her own website on computers and some mobile phones before being retired in 2004 (her archived website is on the Internet Archive, sadly without any live Ananova that I can discover, but there are a few YouTube clips available). I remember watching her. She had character, while always presenting the news professionally. She could smile, frown, cajole, persuade, and of course inform. She had a “pleasant, quietly intelligent manner“, says a BBC report from the time. She was said to have received Valentine’s cards, proposals of marriage, and children writing to her asking for help with their homework. Ananova was real.

A warning from Barack Obama, of sorts

But even if Xinhua, or its press officers, have short memories, what they are showing us now is a great advance technically on Ananova, and rather more practical – not least adaptable – than Kodomoroid. It does not take too much imagination to see how this could be developed so that you could have anyone reading the news to you. The notorious DeepFake software has shown us how easy it is to take videos of someone like Barack Obama, marry these to words spoken by an actor (in this case Jordan Peele) imitating his voice, and persuade the easily persuaded that he is saying anything to you that the software’s manipulators want you to believe. Worried about ‘fake news’? They’ve hardly got started.

So, imagine, you could pick your newsreader of choice, get the machinery to ingest and process the video footage of them, hand them the script, and watch the news that you can trust. Perhaps you miss the reassuring tones of Kenneth Kendall? Well, they’ll bring him back. Maybe you’ll be happier with Selina Scott, or why not Brian Blessed, or Wayne Rooney? What fun you could have. In practice, the developers are suggesting a different, intriguing next step, which could be avatars of parents for reading stories to their children. Not only newsreaders but parents need never be seen to sleep again.

News naturally lends itself to computation, or at least it appears to do so. The regularity of newsforms, generally issued over reliable, repeated periods of time, in the same form, is well-suited to digitisation, as the many newspaper digitisation projects around the world demonstrate. Out of these have then come many academic studies using such digital outputs, not just for the words but for the structures around which those words were created, which confer meaning through the word, theme or story’s position in time and space. The new Living with Machines project at the Alan Turing Institute for data sciences aims to analyse history (specifically the effect of the industrial revolution on society) by using AI techniques on digitised newspapers, trade directories, census data etc. The goal, it says, is to “enable new intersections between computational methods and historical inquiry”. News computes.

Projects I have a particular interest in, using speech-to-text technologies not only to transcribe speech from audio but to extract themes, identify speakers and map locations from the raw text, value news content in particular. In part this is because newsreaders tend to speak clearly, without background interruption, making it easier for the technology to transmute audio signals into word-searchable text. But it’s also the regularity of news as a published phenomenon that aids the development. It shows how patterns develop and evolve through time.

In the future, we will compute our understanding of the past, thanks to our news inheritance.

Robotics has come to news production not just in the eye-catching gimmickry of virtual newsreaders, but in the composition of news itself. For a few years now, some news organisations – notably AP, working with IT company Automated Insights – have been using AI to generate some sports and financial news stories. All you need is the data from someone, a programme that can analyse the sources and place the results into human-readable form (with suitable grammatical filters built in), and a word limit. The results are cold enough, but well nigh impossible for the uninformed reader to detect as having been artificially created.

Therefore what is news? It is not, for the time being at least, something that a robot understands. For it is not the robot that creates the news, any more than a journalist, news editor or publisher creates the news, perverse as it might seem to say. It is we who make the news. News is made by its audiences, who select what to read, see or listen to, from which sources, and in what combinations. That’s the important lesson to be drawn from our current age of information and disinformation overload. News is nothing unless we its interpreters choose to give it meaning.

Virtual Qiu Hao and Zhang Zhao will only survive if we decide to believe in them. The worry is that one day, soon, some of us will do exactly that.