The other day it was the sixth anniversary of the opening ceremony of the London 2012 Olympic Games. I’d forgotten the date but spotted a reminder the day after, and decided once again to look at the video of the ceremony. I’ve seen it many times now – the original broadcast, the repeat broadcasts, the director’s cut on DVD – and yet it has lost none of its power to move. Indeed, given all of the divisiveness that has followed in its wake it has taken on the mantle of lost hopes, quite contrary to its original intentions. It was easy to shed a tear.

Watching again I was struck by the iconography, by the sheer memorableness of each image. Much of it was intentional and planned (by director Danny Boyle and writer Frank Cottrell Boyce), but in the chaos of a live event involving hundreds of performers, inevitably there was much of a random nature to the unfolding spectacle. Yet it all cohered, falling into place through both design and impulse. I wrote at the time about the work’s debt to filmmaker Humphrey Jennings, specifically his book of ‘the coming of the machine as seen by contemporary observers’, Pandaemonium. I argued that the three main sections: Pandemonium [sic], Second to the right, and straight on till morning and Frankie and June say…thanks Tim were dialectical in intent: thesis, antithesis and synthesis. It still seems so.

Then it occurred to me that it would be an interesting exercise to capture those images, through one screengrab of every single shot of the four-hour ceremony, documenting the iconography. Before I’d given it enough thought to think better, I started the project, working from the version available on the Olympic YouTube channel. With each change of shot, I pressed Windows/PrtScr, and a succession of screenshots began to build up.

Inevitably it took a lot longer than four hours, with the need for breaks, corrections and some restarts. Also I had to make compromises as I went along. The opening tracking shot down the Thames has too much going on that goes past too quickly, so I only selected some images. A few screengrabs results only in incoherent blurs and I chose to delete them rather than replace them. For the parade of athletes, I kept it to one screengrab per country, with just the occasional cutaway to the applauding leaders (I’d forgotten that Michelle Obama was there. And Erdogan).

So it is not quite every shot, but it is more than enough shots. 1,542 of them, to be exact. I’ve published them all, in chronological order, on Flickr, subdivided into the names of the sections given in the opening ceremony’s programme: Countdown, Green and Pleasant Land, Pandemonium, Happy and Glorious, Second to the right, and straight on till morning, Interlude, Frankie and June say…thanks Tim, Abide with Me, Welcome, Bike a.m., Let the Games Begin, There Is a Light That Never Goes Out, And in the end.

Maybe I’ll get told to take them down eventually, but for the time being they document something of that which made this piece of theatre so profoundly memorable. They are great feats of visual imagination, combining wit with emotion, grandness with a delight in the minor, telling detail – the workers pouring out of Glastonbury Tor, the massed Mary Poppinses flying to the rescue, Tim Berners-Lee sending out his Twitter message “This is for everyone“, the Akram Khan dance, the dove bikes, the unfolding cauldron. Of course, there are the boring bits, chiefly the march past of the athletes (oh that the organisers had asked Boyle and Boyce to rethink that part of the ceremony too) and inevitably some awkward bits too – the animated Churchill statue, the grumpy Queen, the stumbling start to ‘Hey Jude’. But every great work of narrative or dramatic art carries similar flaws, which are the marks of a stupendous endeavour.

It is the greatest creative work of the century so far. Its richness was apparent from the start, but has only grown with time. It should be on the National Curriculum. It was called Isles of Wonder, and that was the point of it. It’s where we live. 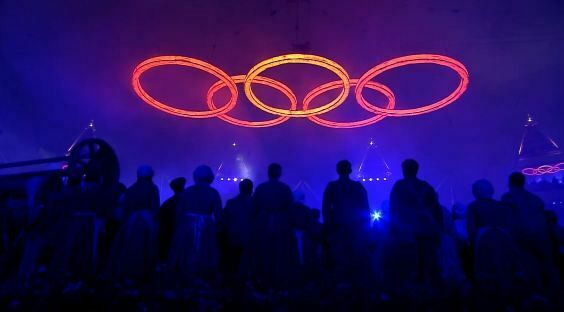 Update (November 2018):
Having published the screengrabs from Isles of Wonder, I have since set about adding a short description to each one, with help from people on Twitter (notably Brendan Conway, Mark Fuller and Richard Jones, to whom much thanks). I have also added some extra images, particularly further scenes from the Countdown opening, and cutaways to dignitaries during the parade of nations. The number of images is now 1,692, and all are gathered together in this screengrab of screengrabs:

A larger version of the image can be accessed here.