It is my habit, whenever journeying anywhere, to take a book with me. No matter what the journey, whether it be short or long, on foot or by transport, there must always be something to hand that I can read. At some point I will sit down, and though a certain amount of staring out into vacancy is unavoidable, even desirable, for the greater part of the time I must read. So this requires a book which can be slipped into a pocket, and if the pocket is small then so must be the volume. My regular choice on such occasions is a small set of the essays of William Hazlitt, produced by Gresham Publishing around 1920. Aside from its portability, it is a book for reminding one what walking, and thinking, are for.

I live close to what might be called Hazlitt country. He was born in 1778 in Maidstone, the county town of Kent, a few miles south of here. Though there are no books by Hazlitt in the town’s bookshop, in other respects Maidstone has acknowledged its famous son appropriately. There is a Hazlitt theatre, around the corner from the Unitarian Church where Hazlitt’s father preached (marked by a plaque on the wall of the still-operational church). The excellent town museum and gallery lauds him appropriately, and has a bust and self-portrait of the man (he was a painter of some skill). This is all the more noteworthy since Hazlitt left the town when aged two, so it can hardly be said that the town made a mark upon him, nor he on the town. Hazlitt’s family moved to Ireland (his father was Irish), then the United States, before settling in Shropshire when he was eight. He was schooled in London, and it was in the city that he would gain fame as an essayist, theatre critic, biographer and journalist, friend of Coleridge, Wordsworth and Keats, one of the finest minds and finest writers of his age.

But Maidstone is where it began, and it is Hazlitt country to me. It is through such countryside that I journey at weekends, walking over the North Downs with a start or an end of the adventure in the county town, and always with a book – so often that book – at my side.

One of the essays in the small volume is entitled ‘On Going a Journey‘, originally published in 1822. I have read it many times. It is not considered one of his great essays, not of the calibre of ‘The Fight’, ‘The Indian Jugglers’, ‘On the Pleasure of Hating’ or ‘My First Acquaintance with Poets’, but it is one where we can get a strong sense of Hazlitt as a character (though everything Hazlitt wrote was autobiographical). The opening lines state his case:

One of the pleasantest things in the world is going a journey; but I like to go by myself. I can enjoy society in a room; but out of doors, nature is company enough for me. I am then never less alone than when alone.

Hazlitt was a difficult character at times; sociable, with a circle of notable friends, but a troubling presence to others, subject as he was to saturnine moods rooted in a lifetime of disappointments, personal and political, and liable to say things as he saw them no matter whom it might offend. Hazlitt needed to get away from company as much as he welcomed it, and found relief in solitude, and movement. It was in journeying that he could rediscover things.

Then long-forgotten things, like “sunken wrack and sunless treasuries”, burst upon my eager sight, and I begin to feel, think, and be myself again. Instead of an awkward silence, broken by attempts at wit or dull common-places, mine is that undisturbed silence of the heart which alone is perfect eloquence.

However, the subject of ‘On Going a Journey’ is not merely escape. That is only the start of it. The essay strides from idea to idea like a mind working things through on such a journey, expanding the thesis to consider how it is that we position ourselves in the world.

The world, in our conceit of it, is not much bigger than a nut-shell. It is not one prospect expanded into another, county joined to county, kingdom to kingdom, lands to seas, making an image voluminous and vast;- the mind can form no larger idea of space than the eye can take in at a single glance. The rest is a name written on a map, a calculation of arithmetic.

For Hazlitt, this particularity is how we are able to understand, and cope with the world, apprehending not all things at once but instead picking out elements from the ‘infinity of things and places’, picking out single threads from ‘the whole web of our existence’ – much as we now know memory works, the converse being the wretched, inhuman state of Borges’ ‘Funes the Memorious‘, the man whose curse is to remember everything.

For Hazlitt, a journey is a means of processing thought and self-discovery, and the essay is a form of journey. The essayist sets out with an objective in view, but may only get to that point discursively, taking in views along the way, enriching argument through discovery and the association of ideas, pulling the threads together. To walk is to write. He makes the analogy clear in the later ‘A Farewell to Essay-Writing’ (a title it only gained after his death, when his son edited his father’s works), another essay that reveals much of the man’s character. Here he describes walking in a way that clearly signifies writing:

Here I can saunter for hours, bending my eye forward, stopping and turning to look back, thinking to strike off into some less trodden path, yet hesitating to quit the one I am in, afraid to snap the brittle threads of memory.

The essay gains its name from the 16th century French writer Michel de Montaigne, who called his prose pieces Essais, from the French verb essayer, or ‘to try’. Montaigne set out to try out or explore an argument through his writings, and though the essay has developed into a varied form embracing any number of definitions, its essential rationale remains as Montaigne knew it. The essay explores an idea, discursively yet with an end in view, so that wherever the mind may wander the direction is always certain. To write, and to read, an essay is to go on a journey, and the experience of it is profoundly analogous with walking.

Of course there are different kinds of essay, as there are different kinds of walking. There is the purposeful stride over a short distance to a clear objective. There is the casual stroll, the prolonged ramble, the inquisitive exploration, the splendid adventure, and the ill-advised speculation in which the walker succeeds only in becoming lost. And just as there is walking for its own sake, there are essays on walking.

Hazlitt’s ‘On Going a Journey’ is generally recognised as the first such essay. Many other have followed since, to the point where the walking essay is practically a genre in itself: Charles Dickens (‘The Uncommercial Traveller’), Robert Louis Stevenson (‘Walking Tours’) and Henry Thoreau (‘Walking’) are some of the prime examples. Nietzsche, Kant and Rousseau were each prodigious walkers who found that to walk was to think, while later generations of flâneurs – Baudelaire, Benjamin, Iain Sinclair – revere dream-walking through the city. The Wordsworths (Dorothy and William), in their letters, set down in words the exhilaration they felt at the discovery of walking for its own sake, and of finding the words to express their delight in what was both exercise for the body and mind. Not before the Romantics (Hazlitt was among their number) had anyone written of walking as anything other than a means of getting from A to B. The literature of walking found the philosophical in what was previously purely functional.

This has much to do with the new relationship between the observer and nature that the Romantics championed, of course. But it is also about the championing of solitariness. Apart from the Wordsworths, literary walks are almost always undertaken solo. They are means of discovering the self, and having someone else alongside you can only be a distraction, turning the walk into something else. Though Hazlitt refers to walks with friends, and refers throughout his essay to conversations he has had with others, he needed to be alone to do so – or at least not among friends.

These hours are sacred to silence and to musing, to be treasured up in the memory, and to feed the source of smiling thoughts hereafter. I would not waste them in idle talk; or if I must have the integrity of fancy broken in upon, I would rather it were by a stranger than a friend. A stranger takes his hue and character from the time and place; he is a part of the furniture and costume of an inn … In his ignorance of me and my affairs, I in a manner forget myself.

Hazlitt’s solo walking was not egotistical; it was an attempt to forget the self.

The irony was that this escape from others was recollected in the company of readers. Hazlitt was never alone; if he was not writing for others, then he was composing his thoughts through experience in preparation for setting down such ideas on paper. The writer can never be alone. They will seek solitariness, but only the better to compose themselves for their readers. The essay is the quintessence of this situation, which is maybe why it enjoys such a high literary status. It brings together the personal and the universal, isolation made manifest in the company of strangers. It sums up who we are, figures without meaning except for the associations we carry around with us. ‘We measure the universe by ourselves, and even comprehend the texture of our own being only piece meal’, writes Hazlitt, adding ‘In this way, however, we remember an infinity of things and places’. In walking alone we both lose ourselves, and regain ourselves.

I walk to think, or try to. If I need to solve a problem, compose a talk, formulate an argument, or even write one of these blog posts, I find heading out on foot is the way to make incoherent ideas fall into place. But as the walk progresses, the facility fades. My mind begins to wander, not necessarily distracted by sights in country or town (I am as likely to walk through the back streets of London as I am to stride along the North Downs of Kent), but by the act of steady motion. The rhythm of walking takes over. When I am composing thoughts for problem-solving or writing, I walk quickly. As I slow down, I lose control of my thoughts. My head becomes filled with half-formed notions, arguments, unanticipated recollections, snatches of inspiration that fall away upon later reflection, songs that refuse to leave my head, forgotten voices. Walking becomes like a dream, in which all of the mental associations to which Hazlitt refers are there, but forming a narrative of their own. I do not shape them; I have no control over them, being asleep.

And then reality intrudes once more, as I have to wipe mud off my boots, or negotiate a stile, or I find an eye-catching view that demands that I capture its picture. The reverie is broken. Or perhaps it has been a long journey, and it is time for a pause, if the weather will remain kind. So I find a tree trunk, or a dry patch of grass, and, sitting down, reach into my pocket for the book, brought along for just such a moment. And with that I find company, and so inspiration; and must then rise up, and walk on. 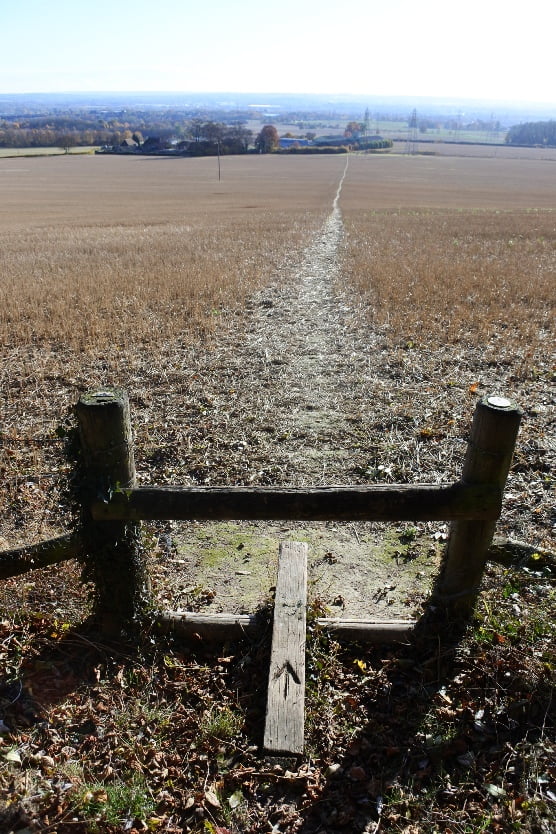