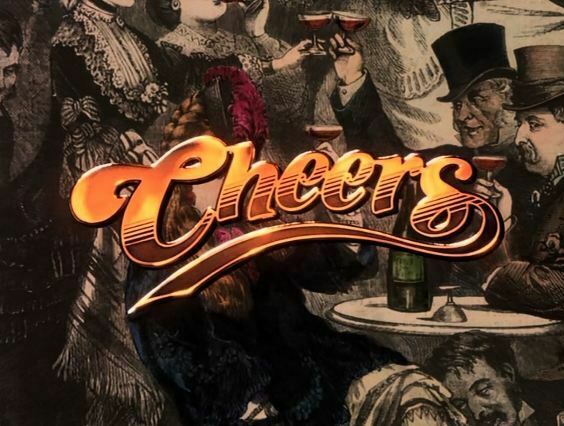 I have just finished watching Cheers. It must be three or four times now that I have sat through the entire series of the American sitcom – 275 half-hour episodes, eleven seasons, originally broadcast over eleven years (1982-1993). It began its re-run on Channel 4 in the early weekday hours early into the lockdown period, two episodes shown per weekday, and I watched every one without fail. On the last day (26 August 2020), the final episode was followed by the first episode, as Channel 4 began the cycle all over again.

It made for fascinating viewing, to see the end of a story followed by its inception. I won’t describe the final episode, for the sake of anyone who has not seen it or seen the whole series – suffice to say that it is unusual in tone, and is so constructed as to be the mirror opposite of the first episode. But that first, pilot episode, entitled ‘Give Me a Ring Sometime‘, is worth praising and examining, for to describe it is not to give anything away that matters, but merely to open the door.

‘Give Me a Ring Sometime’ is, to my mind, a perfectly-realised example of narrative art. It is up there with The Tempest, Right Ho Jeeves, The Good Soldier, The Shop Around the Corner and La Nuit Américaine in which form, language and character are in absolute alignment. It is not that they are necessarily profound – though some are – but that they express such delight in presenting the story that they have to tell.

‘Give Me a Ring Sometime’ stands out among such company for only being a part of an overall story. It is the pilot episode of what turned out, in time, to be a hugely popular comedy series whose success was based on achieving that ideal state in which the story feels as though it could go on forever. A pilot episode has to introduce its subject, its location and its characters. It has to entice its audience with a formula. It must encapsulate all that the producers hope will follow, establishing a vision. It must tells its own story while promising all other stories that its format can provide. It is a plea and an expression of faith.

When ‘Give Me a Ring Sometime’ was first aired (30 September 1982, on NBC) the ratings were poor. Cheers only picked up momentum after reruns, but that was perhaps the best way in which to experience the pilot. To see some of the series mid-run, to be come engrossed in it, and then to encounter how it begins is to be astonished at how much writers, producers and performers saw what was to come. It is though all 275 episodes were conceived of and produced at the same time. All of the necessary elements are there, their purpose understood, their promise certain to be fulfilled. That’s what happens with good ideas, sometimes.

The set-up is this. Cheers is a Boston bar run by former baseball star Sam Malone (played by Ted Danson). We see Malone walking into the room from a darkened corridor, brushing his hand against the bar, the camera tracking with him to reveal the huge set that will be, they hope, our home as it is theirs. A boy enters with a fake ID, but fails to con Malone into serving him a drink. It’s the opening gag before the haunting opening credits sequence rolls, rostrum camera shots slowly zooming in over vintage photographs of bar habitués, with the name of the actors with whom we will become so familiar matched up to their past selves. The theme song that must have the strength to last for eleven years and 275 episodes tells us that this is the place where everybody knows your name. This is a home for lost souls.

A couple enter the bar. He is a literature professor who oozes pretension; she is his star-struck teaching assistant. They are about to fly off to Barbados to be married, but it becomes clear that the professor is still in thrall to the wife he has yet to divorce. The woman, Diane Chambers (played by Shelly Long), is left alone at the bar, only gradually realising her true situation.

Other characters appear as a background is laid out: Coach (Nicolas Colasanto), a muddled-headed former baseball coach and now bar-tender; Carla Tortelli (Rhea Perlman), the downtrodden but feisty waitress; and Norma Peterson (George Wendt), an accountant and permanent barfly, Cheers‘ most loyal customer. Each establishes their character in an instant, so that we feel they have always been there and we have just intruded on any moment. However, this is not a comedy about types, but about verbal interaction. Cheers works by people firing witty lines at one another across the bar, as though it were an arena much as Sam Malone knew from his baseball days. We are still watching the game. This is the world, with a bar at its centre, and while it is refuge it is also somewhere where you have learn to survive, where you have to fit in or you will be rejected. This is the brutal undertone that helps define Cheers, a series characterised by the unsettling cruelty which people sometimes inflict on one another. Diane Chambers’ failure ever completely to adjust to a world that she wants to welcome her is one of the key elements that will make the series’ story so rich.

Another element is her romance with Sam. It is obvious from the start that this will be the primary narrative. He is a plain-speaking, womanising man of the people; she is an uptight bluestocking, unable to control her academic affectations. They are that most difficult of dramatic propositions, the opposites who attract. But it’s there in the immediate realisation each has that they somehow complement one another, in their particular outsider’s view of the world. Each will reveal an acute sense of time passing by, as the series progresses, that informs their developing characters. It is exquisite casting, the answer to a producer’s dreams (I think wistfully of what Lisa Eichhorn, who was screen-tested, would have made of Diane, but Shelly Long and Ted Danson are an inspired duo). They are the perfect imperfect couple, and on that basis your drama could potentially run forever.

It is not just story, or character, or wit that makes Cheers special. An almost unacknowledged feature is its relationship to the everyday, specifically the movement of the everyday. It’s there in the background. The bar is filled with people, often twenty or more, just seated at tables, chatting and drinking. They play no part in the narrative, no attention is drawn to them, they are just there. Often people will be seen in the distance, entering the bar and choosing where to sit. In any other drama one might expect them to be a part of the developing action; in Cheers they are simply walking into a bar.

This is complemented by the work of the people behind the bar – Sam, Diane, Carla, Coach. They are always doing something. So much time is given to showing them pouring drinks, cleaning glasses, counting change, occupied with the mundane essentials of their working lives, even while firing witty barbs at one another. Inconsequential movement gives the action life. This all plays into the sense of Cheers as a place of refuge, where time is steady and the driving forces of the outside world do not intrude. Each episode of Cheers has its story within the overall story, an incident driven by a crisis in one or other of the leading character’s lives, or the intrusion of an outsider, but Cheers is really always fighting against such artificiality. Cheers is always pointing to a state where nothing happens, where nothing need happen. As the title songs says:

Making your way in the world today
Takes everything you’ve got
Taking a break from all your worries
Sure would help a lot
Wouldn’t you like to get away?

Cheers represents the impossible dream in the most believable of settings.

And there’s the camerawork. The large set with the long bar in its centre allows for all the variety of multiple locations on a single set. Long shots take in the whole of the bar (with all those people milling about in the back), close shots pick out dramatic points at any end of the bar or in its centre, panning shots sweep from one narrative point to another, while surprise cutaways capture the characters at moments of dramatic tension. All of this is in evidence in ‘Give Me a Ring Sometime’, as is the wit of the filmic style. This is exemplified by a sublime Cheers joke, in which Coach picks up the phone at the bar. Someone is asking for an Ernie Pantuso, so he calls out the name. “That’s you, Coach” says Sam, off screen. “Speaking,” says Coach, without a break. The timing of the gag (which plays on Coach’s befuddledness) is exquisite, but what makes it work is that they do not cut away to Malone for his words, as any other comedy might have done. We only see Coach’s mind working to its own logic. The wit in the visuals matches that of the verbals.

‘Give Me a Ring Sometime’ ends with a necessary compromise. It has to set up the drama more than it needs to resolve its own story. So, somewhat improbably, Sam offers Diane a job as a waitress (“You like the people here, you think that they like you”, he says, pointedly and prophetically). She accepts. It is a mechanical necessity. Yet the episode has the quality of a fairy tale (Carla even refers to Diane as ‘Goldilocks’, ostensibly because of her hair). Diane is the abandoned child who must somehow find her home again. She thinks she has found it, but will discover in her moments of crisis that she is still lost in the woods, still seeking refuge.

Eventually Diane Chambers had to leave the series, after five seasons, because Shelly Long wanted to move on, but also because in dramatic terms she could seek no more. She was replaced by Rebecca Howe (played by Kirstie Alley), who brought a new life into the show, but whose crises did not matter. Her dramatic life was one designed for comic situations; there was no fairy tale about it. The gags continued to roll, the wit never dimmed, characters old and new hung on, the bar remained. Fixed things stayed fixed. But, though the ball carried on, Cinderella had fled into the night.

‘Give Me a Ring Sometime’ is only a pilot. It sets up a situation. Its special quality lies in its anticipation of all that is to come, its almost uncanny apprehension of a particular kind of narrative timelessness. Its genius is to reveal a home for everyone through the hopes and heartache of one who is fated never to call it home.

I have just started watching Cheers again. Perhaps this time round she’ll stay.

8 thoughts on “Give me a ring sometime”