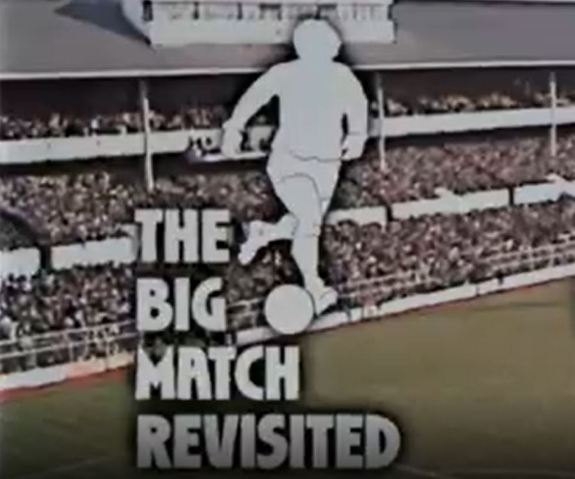 My favourite television programme of the moment is The Big Match Revisited on ITV4. This is a series of repeats of the revered ITV football highlights show, The Big Match (1968-1992), which at the time that I remember it best – the 1970s – was shown on Sunday afternoons. It was never quite as good as the BBC’s Match of the Day (which stole its thunder by being shown, as it still is, on Saturday evenings), but was nonetheless essential viewing. It was presented by the avuncular Brian Moore, whose delivery, a combination of wry authority and moderate enthusiasm, was ideally suited to its times. It earned the trust of viewers, players and managers equally.

The Big Match Revised, after a brief modern voiceover, presents the original programme as broadcast, with only the advertisements changed. Currently it is showing games from the 1979-80 season. By that date I had lost most of the interest I once had in the game, but the series is nevertheless feels satisfyingly nostalgic – and something more than that.

There is plenty there for the nostalgist – the names of the past (whose destiny, for good or ill, you know but they cannot), the dreadful haircuts, the quagmires that passed for pitches, the huge shirt collars with complementary ties won by the players in post-match interviews, the rules now lost (look, they can back-pass to the keeper), the standing fans, the perimeter advertisements that don’t move, the shorts with only numbers not sponsors’ logos. In that simpler age there were no wingbacks, no one was credited for making an assist, no VAR…

All of this has great appeal, as do the games themselves, which do not show much of the skills and tactical thinking that we expect of Premiership matches today, but are fine contests for all that – particularly praiseworthy given all that mud. But the particular appeal to me – which the nostalgia naturally complements – is the sense of the playing out of lost time.

It is so rare to see extended actuality footage from the recognisable past. When television shows us historical programmes they are usually fictional or light entertainment. If we are shown actuality, it is shown in the form of archive clips used to illustrate a topic, or documentaries which have themselves turned the visual materials to hand into a particular didactic or narrative shape. On the rare occasions when we are permitted to see extended actuality, so lightly edited that it can pass for actual time, then it is of a notable historical event – the 1953 coronation, for example, or a high-profile sporting contest, such as the 1966 World Cup Final.

There is nothing historic about the matches on offer on The Big Match Revisited. They are, almost without exception, quite average. They are everything that anyone bar the most dedicated on fans of one or other side would forget. They are all style and little substance.

Their ordinariness, their forgettability, however, is what makes watching the repeats so compelling. Here is the extended here and now, only in the past, for an hour’s broadcast (the programme generally shows highlights from two or three games). This ordinariness, alongside the tolerable colour video, and unobtrusive camera technique and editing, makes the programmes feel like now, or some other time that could be now. In another world, recognisably the one we share, these games are going on in the present. They are not so much repeats as an alternate time that might be the time in which we find ourselves, were it not for a few historical twists that are not in themselves of any great significance (VAR, logos, mud-free pitches, shorter hair). Fundamentally they share the pattern of the present.

I said ‘recognisable past’, because there will be a limit to that sense of past time being time now. The colour over monochrome, the affordability of the extended record of mundane matches because of the cheapness of video as opposed to film, the change in the commentators’ voices from the public school tones of the past to Moore’s demotic, all help eliminate the sense of alienation that archive film can bring. The recognisability aids the affinity.

But you also need the extended time. You need to let the past unfold for a while, in its own form, making its time become your time. It needs time to persuade you of its normality, to persuade you that this other time is where you belong quite as much as the current time to which you believe that you belong. It is a liberating feeling – if anything, the complete opposite of the nostalgic. It is not time lost, or regained, because it was never lost in the first place. Instead it is happening now.

It can be argued – it has been argued – that film made a wrong turning when someone invented editing. It stopped letting things simply unfold before the camera, which is maybe all that film needs to do. Editing broke up time to make a point, to tell a story, to jolt us out of our reveries while equally propelling us into dreamworlds. Meanwhile, an ordinary reality kept rolling on, mostly eluding the camera, emerging fitfully in those overlong shots in home movies, in CCTV, and in weekly football highlights shows.

They are highlights, not the full game, but they extend things for long enough to give the sense of uninterrupted time. They are edited, naturally, and highly selective (we see the game but little of the crowds, and we always see the same kinds of shots because the pitches remain standard and the camera positions pre=determined to what depicts the game best). Just to point the camera anywhere is to be selective, and maybe what is real is only everything that the camera does not see. But in The Big Match Revisited I see that dilemma resolved. I see that which I need to see, which is the satisfactory passing of time. It doesn’t matter whether I remember that time or not, because it is not about the past as a memory but rather the past as coterminous with the present.