Back in 1981 one of my favourite haunts was the Albion Bookshop in Mercery Lane, Canterbury. Squeezed into its medieval plot over two floors, tightly-packed books climbed up the shelves to ceiling height, while central islands created alleyways through which I could venture through all – so it seemed – that the world of letters could offer. Such were the advantages of living in a university town: the regular, best-seller titles were all there, but also something for every subject you might consider, the obscure and the specialist jostling for space alongside the familiar. It was the world condensed. (Alas the shop closed in 2008.)

On the top floor was the literary section, where I spent what feels like hours scouring every shelf of black-spined Penguin classics, portentous tomes of literary criticism, and especially the floor-to-ceiling section on the left-hand side given over to poetry. There I made a particular case of looking out for collections from local presses of local poets, in a spirit of Kentish patriotism I suppose. One strong, always reliable collection was the annual Poetry South East volume, collecting together some of the best poetry locally from the past year. There were some notable names in those volumes: Elizabeth Bartlett, Patric Dickinson, Nicki Jackowska, Fiona Pitt-Kethley. But in 1981, in Poetry South East 6, one poem from a poet new to me stood out. I can still remember the jolt of encountering ‘The Chant’ by Madeline Munro for the first time.

Tuesday, the market day
at Inverness. He had been
asked. Tonight her father
would bring home, under his arm,
the frock, maybe a box with something
more, and want his slippers
while it was unwrapped.
Now there was Janet, safe
in the byre, soft black of the Jersey round the eyes –
and she could lead her like
a dog, for summer holidays,
rope-haltered to Newmill.

What can we chant now to lift the dark?

It is hard to explain the power of this mysterious poem. It conjures up a time and place precise in its particularity yet universal in its application. There is enough to tell us that the location in North-East Scotland, and that the writer is describing a childhood memory. The action seems clear enough, yet a strangeness hangs over it. Janet is the name of a calf at a family farm, yet might Janet also be the child? Who is being led round like a dog? The fears of childhood, the darkness that they brought on, are adroitly evoked, then that final line summing up the mercilessness of memory and the collapsing of time. The chant itself is a poem in miniature, as the child becomes the poet, and every poem becomes a chant, hoping to lift the dark.

Madeline Munro was the most little-known, good poet you might hope to find. She wrote too little to be great, but more than enough in a tiny oeuvre to demonstrate that she had a unique voice and a rich poetic gift. She was born in 1930, the daughter of a Nairn sheepbreeder, and grew up on the family farm. Clearly highly intelligent, she went to Edinburgh University before becoming an English teacher in Scotland, later moving to Speldhurst in Kent with her sister, to whom she was very close (she never married). She had tried her hand at writing poetry in her twenties, gave it up, then returned to poetry in the 1970s, by which time she had become a teacher-librarian at a Sevenoaks school.

Her poems began to appear in magazines, and quickly drew attention and prizes. In 1983 her first volume appeared, The Chant: A Highland Farm Childhood, a slim (27 pages) pamphlet published by Yorick Books. It’s a rarity now, but modest as it may appear to be it is a perfectly-realised work of art. As one reads through the seventeen poems in the pamphlet, its design becomes clear. ‘The Chant’, which opens the collection, sets out both the idea of poetry and the geography of memory: actual and felt. The poems that follow explore this territory. They all concern Munro’s Nairnshire childhood, with her parents, sister and uncles Fred (Afed) and Walter (Wakle) featuring in her acute impressions of a childhood lived close to nature but also to the cold, hard realities of farm living. Here is the opening to ‘My Father’:

My father – who can boast like this? –
Once brought in testicles of calves
To roast on the shovel of the
Best bronze fire set.

Arresting in imagery, precise in language, the poem evolves into an elegy not just for her father but for a view of life that was precious for its individuality and honesty. The point is made in the jolting change in perspective of the last two stanzas, following a description of his funeral:

What neighbours said away from us
Is hard to know. No doubt they mocked
His big man airs but that day sensed
A milestone gone, scanned new horizons.

Where, even on the land, professionals brought
Push-button expertise to cruelty;
Switched off the daylight; recorded
And reduced mass crimes to microfilm.

The poems are memories evoked without sentimentality but with a sharp eye for the significance of the ordinary. In ‘Lamps’, on the lighting up of paraffin lamps, there is an acute description of the rituals of lamp-lighting before dark fell, concludes with a visual memory that opens the eyes as it deftly ends with three clear stresses:

They are poems of small epiphanies and hard realisations of life’s arbitrariness, and finality. Both are combined in this image of her mother mourning the death of Afed (in a poem of that name):

She stood by the flowering currant
Bush, and wept to look
At the narcissi, sweet paper-whites, blowing
His light among the bolder daffodils.

Or consider the unsettling, darkly romantic final stanza (Munro excels at tripping us up with her final lines) of ‘Again’, a poem about a loyal dog sent away to another farm, which ran back to re-join them only to be deported again, and so to pine away:

Tonight, in the rising dark, again
a small shape stirs by that pool where were-men
drag their prey. We watch with tethered hearts.
Inscrutable patrols, age-old and unassuaged,
arrayed in some gross authority,
close in, scenting the winds for love. 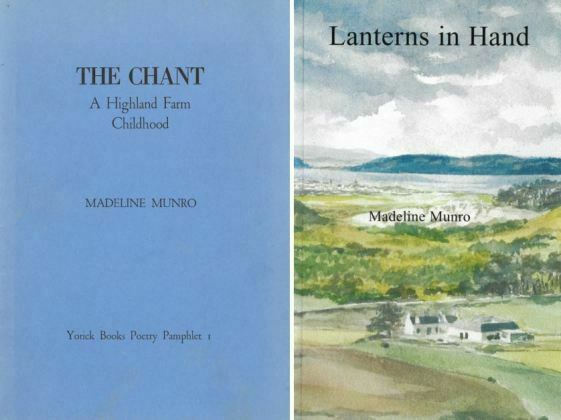 The Chant made some impact. Munro’s poems were read on the BBC, gained further prizes. She attracted notable advocates, in particular D.M. Thomas and Nobel prize-winner J.M. Coetzee, who writes words of praise on her 2003 volume, Lanterns in Hand: “I am impressed by the way in which a way of life that has now practically vanished, but which had its own unique enchantments, has been transmuted and saved by the hard craft of poetry”. That neatly sums up the poems’ magical qualities, their archival function and the skill that went into their construction. Lanterns in Hand, published by what seems to have been her own Whareama Press, collects together all of the poems from The Chant (some re-written) along with some, though not all, of the work she had continued to publish in magazines. The later poems sometimes expand on the Nairnshire memories, but there is an increasing preoccupation with the cruel fate of animals – Munro and her sister became ardent animal welfare activists – and poems on religious themes. ‘Mary Magdalene’ (from 1984), inspired by Donatello’s statue ‘The Penitent Magdalene‘, is a work of economy and genius:

He had cast out the seven
Devils: the rags of her suffering
Dropped at his feet.

But without
Love the healing could not last.
And coming in the morning’s
Dark she found the stone rolled
Back.

Her weeping brought him near
To comfort her – until the spoken
‘Touch me not’.

Again
She knew that there was none
To help; the old infirmity
The fearful sepulchre of self.

Between The Chant and Lanterns in Hand Munro had published Fe Fi Fo Fum: Poems to Fight Giants (Whareama Press, 1999, republished 2008), an angry collection of poems about the mistreatment of animals which loses much of her skilful handling of language and at times veers too close to doggerel (the pick of the poems are reproduced in Lanterns in Hand). Better, though no less enraged, is White Rabbit with Yellow Flower and other animals (Whareama Press, 2008), a collection of poems for children, though the artful phrasing might puzzle the young to whom it is ostensibly directed, while the persistent reminder of the entrapment of animals (a theme that goes back to ‘The Chant’) is in sharp contrast to the sweet paintings that accompany the poems. And what would a child make of ‘The Sun’, with its regret for lost thoughts and lost poetry?

Shafts of light that race across land
Unsettle the mind. Where are the poems we
Never wrote, let slip from the edge
of our thoughts?

The later work is slight, but nevertheless consistent with her artistic mission. Munro was concerned with individuality. The naming of animals (Janet), people (Afed, Wakle) and places (Tomashogle, Newmill, Laiken – the family home) confers uniqueness and a home in the memory. Mass crimes are perpetrated on the anonymous. The nameless and the numberless, all that mass society reduces us to, become defenceless, lost to cruelty. Her animal poems rail against all that is permitted once a living object is deprived of its identity. The roots of this lie in her best poetry.

It is a poetry of disenchantment. So many of the poems end with a loss or a harsh twist of fate, but to be disenchanted you have to have been enchanted first. The great success of The Chant is how it brings these two together: the frisson of treasured memories that affirm for the poet who she is, and the turning of the enchantment through time, experience and change. It is all that poetry should be. It shows us the fierceness that can lie in a quiet life.

Madeline Munro never built on her early acclaim, publishing only occasionally in small magazines such as Ambit and Outposts, the inevitable lot of the minor poet. Perhaps many poems that could have been were let slip from the edge of her thoughts. She devoted her latter years to the care of her sister Marion, who suffered from a stroke in 2000. Following Marion’s death in 2006, Madeline became reclusive, while increasingly beset with ill-health. She ended her days in 2016 in a Tonbridge care home, aged 86; her funeral was held in Nairn. A local paper noted her passing and the acclaim her poetry had received. If more was said elsewhere I have not found it. But the poems remain, and if The Chant is now a rarity, copies of Lanterns in Hand can be readily found. It is rewarding poetry with a true voice, ripe for rediscovery.

The final poem in The Chant is ‘Easter Thoughts (on a coach returning from Sauze d’Oulx-Milan)’. It surprises us, whisking the reader away from Nairn in the 1930s to Italian mountains in the 1980s. It recalls her mother’s last days: ‘In death / My mother lost the grace / She could take on’. True to form, the second and final stanza (echoing the form of opening poem ‘The Chant’) hits home hard. It takes us down the mountainside, down in memory, down to some signs of hope, then to a final line of brute honesty. T.S. Eliot’s opening to ‘The Waste Land’ does no better:

Time
Dredges my thought
Now we have left the mountains
In their last white folds,
Dropped to the valleys,
Down
To showers of new cowslips,
Eager, though tightly prim,
To taste the first, fresh sweetness
Of that callous swindler, Spring.

3 thoughts on “What can we chant now to lift the dark?”