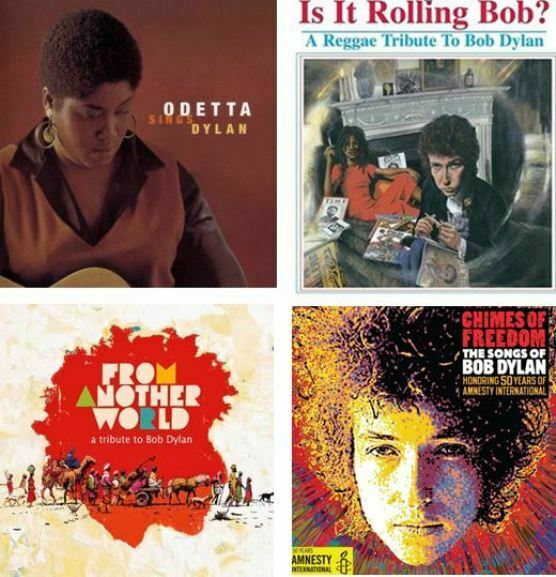 I’m on working on a new web project which is close to going live, but it’s meant that writing on the web, including this site, has been a bit on the quiet side. But while I’ve been working on said project I’ve been having fun listening to Bob Dylan cover versions.

It started when I came across a mention of the folk and gospel singer Odetta and suddenly realised here was someone whose name I’d known for years but whose music I’d never knowingly heard. Shame on me. So I turned to Spotify, and saw Odetta Sings Dylan. I was blown away. What a tremendous voice, such gifted musicianship, and above all what taste. Made in 1965, so made at the point where Dylan was moving from protest songs to love songs and songs with a more mysterious reflective air, it demonstrates the great range of possibilities Dylan the songwriter offered to singers and musicians of every kind. When he wasn’t performing or recording, Dylan was making demo recordings for his publishing company, gathered together recently in The Bootleg Series Vol. 9: The Witmark Demos: 1962–1964. Singers and their managers quickly took notice, eagerly putting out their own versions of this treasure trove of songs, and helping to establish the young Bob Dylan’s fortune.

The first whole album of Bob Dylan covers, in 1964, was How Many Seas Must A White Dove Sail by American folksinger Linda Mason. I’ve not heard it, but the general verdict is that it was pleasant but insipid. The second was Odetta Sings Dylan, an album of grit, passion and style. Highlights include a mesmeric ‘Mr Tambourine Man’ and a delightful, jaunty version of the obscure number ‘Baby, I’m in the Mood for You’, which was in its turn covered only recently by Mylie Cyrus in a storming performance on the Tonight show. It’s an album that makes clear the greatness of the American folk tradition, and how Dylan changed it. 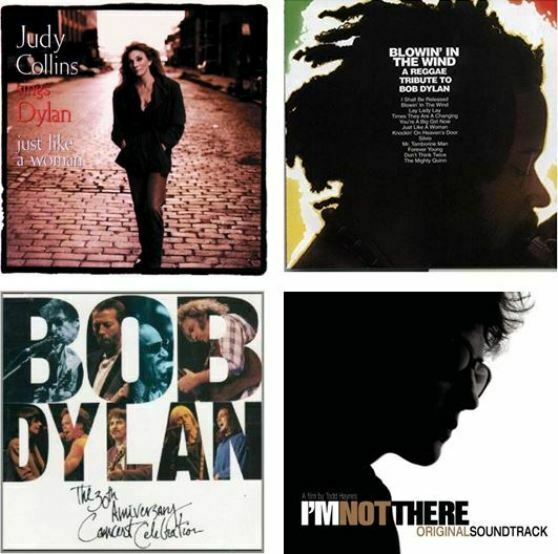 There have been many hundreds of Dylan covers since then. It’s fascinating to wade through the huge variety of them now so easily available via Spotify. There are the famous examples, of course, whose particular character has perhaps made the cover the definitive interpretation rather than the original – Jimi Hendrix’s ‘All Along the Watchtower’, The Byrds’ ‘Mr Tambourine Man’, Adele’s ‘Make You Feel My Love’ – and those artists known for repeatedly borrowing from the Dylan songbook – Fairport Convention, Manfred Mann, Bryan Ferry, Joan Baez, Rod Stewart. But dig further, and what you uncover says so much not only about Dylan’s songwriting genius but about the particular virtues of the cover version.

The successful cover version must be an arresting interpretation of an established original. It is a different act recording a song that Dylan never got round to recording himself to taking a song for which the artist had set the template through his own recording. The musician attempting a cover of course needs to invest it with their own personality, to do something different with it, but it will always be with the listener’s knowledge of the established idea of the song – the Platonic ideal, if you will. We hear both songs, original and its complement, playing off each other, creating a deeper listening experience. We also sense the other version that may yet be to come, as each new imaginative interpretation sparks off the possibility of another that will take a great song in yet another direction.

Most Dylan covers are pleasant enough but fail to reach such heights. They imitate the original, or they replay it with recourse to generic musical forms (most obviously by making pop songs out of them), with the result that we learn nothing from them. We hear only failure. The best covers surprise us by revealing the song that we had not expected to be there. The cover should uncover. 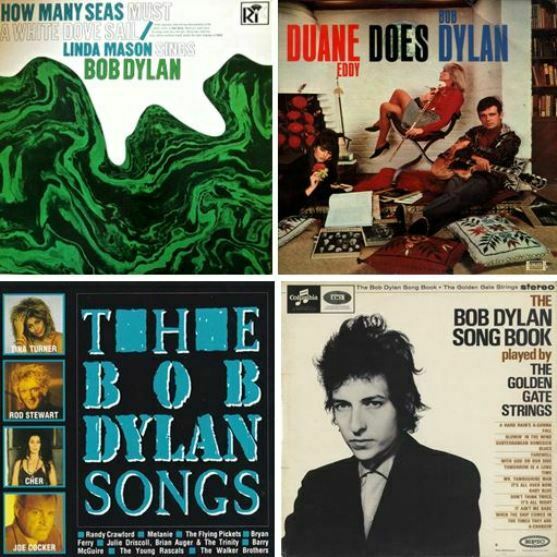 I’ve put together a playlist of Bob Dylan cover versions at the end of this post, which arranges five-and-a-half hours of Dylan’s songs in chronological order of their composition. This makes for an entertaining journey through the progress of the Dylan song, showing how artists from today still continue to revisit the early catalogue, even more than they may attempt the more recent songs, which have not found quite so many champions as yet. So we go from Odetta to Peter, Paul and Mary, to John Martyn, on to The Chieftains finding the Irish reel in ‘When the Ship Comes In’, Duane Eddy bringing out the twang in ‘She’s Belongs to Me’, The Specials addressing the 1980s Maggie in ‘Maggie’s Farm’, My Chemical Romance turning in a rapid punk rendition of ‘Desolation Row’, Patti Labelle finding the funk in ‘Most Likely You’ll go Your Way (and I’ll Go Mine)’, Solomon Burke giving us a gospel-tinged ‘The Mighty Quinn’, Acker Bilk gently massacring ‘Lay Lay Lady’, Drew Emmitt revealing the bluegrass in ‘Tangled Up in Blue’, and Tom Jones relaying a desolate ‘What Good Am I?’. Some of the selections are there more for their surprise factor than anything else (Emerson Lake and Palmer?) but I think it’s a good way to spend an evening in.

But before getting to that, here are ten favourite covers of mine – not a ten best, but ten that best demonstrate the variety and the richness to the songwriting that they reveal. But I have put them in reverse order of favour, just for fun.

This is such a delight. From the moment the delicate drumming and counterpointing guitar riff kick in you know you are listening to something special. It captures all of the exuberance of the young Dylan, Odetta’s rich timbre starting off in measured style but building up in enthusiasm as the mood gets hold of us all.

Nina Simone covered Dylan on several occasions, never with more heartfelt power than here. The lyric may be one of Dylan’s sappier efforts, and it is a bit cringe-making when Simone ends by changing the ‘she’ to ‘I’ in the final chorus, but it is the surging emotion carried along by the strings and high-note organ that make this so great. In particular, the transition to the middle eight, with the tremulous build up in the music, ending with a crashing wave of feeling topped by Simone’s grand piano playing as we hit the song’s conclusion make this an unforgettable interpretation.

8. Wilko Johnson, ‘Can You Please Crawl Out Your Window’

Many song covers can be judged to be better than their originals, but few take what was a bad song, badly recorded the first time round and uncover hidden gold. Wilko Johnson, with Roger Daltrey on vocals, takes a mid-60s Dylan single from a period where he was trying too hard and hadn’t worked out how to get the best from his new backing band, The Hawks. The result is a rock-solid r’n’b number driven by a tight band, insistent harmonica and a strong vocal performance that puts over even the more pretentious lines with real conviction. Better than Dylan, for once.

The 13th Floor Elevators turn Dylan’s mysterious, threatening song (just who is it directed towards?) into something almost teetering over with emotion. Roky Erikson’s vocal brings out all of the trouble and feeling, accompanied by meandering lines from mildly distorted guitars as it hovers between folk rock and psychedelic adventurism. It captures the song’s intimacy as well as its epic quality, and is said to be among Dylan’s own favourite covers.

And now for something entirely different. This comes from From Another World, a collection of world music interpretations of Dylan’s songs. Whether any of the artists involved had ever heard of the songs before they came to record, I don’t know, but the effect of each one is astonishing (and challenging, since for some it can take a while before you work out what song is being covered). The great charmer on the record is this Burmese version of ‘I Want You’. It makes you smile, first for its unlikeliness, but then for getting things so absolutely right.

There have been at least two reggae compilation of Dylan songs, both rather fine: Blowin’ in the Wind and the supremely well-named Is It Rolling Bob? (you have to know your Dylan to get the joke). The highlight on the latter is this sweet interpretation of a song which has been sung by so many so many times that you would thing all of the life had been squeezed out of it. Isaacs approaches the song with the delight of someone who has found the ideal vehicle for his melodic talents.

4. Wanda Jackson, ‘Thunder on the Mountain’

A rockabilly star in the 1950s and 60s, Wanda Jackson enjoyed a comeback in 2011 with the Jack White-produced album The Party Ain’t Over which had a number of surprise covers, none more striking then this explosive version of the opening number from Dylan’s Modern Times. It’s a high-tempo rockabilly number with wild accompaniment – everyone involved clearly had a glorious time producing it, while Jackson seems to relish having sharper lyrics to work with than usual. A recording that starts over the top, and works its way up from there.

A great cover can make any song the performer’s own, no matter how august the original. Marianne Faithfull takes on the seemingly impossible challenge of ‘Visions of Johanna’ and makes it her song. The modest musical backing is not all that different to Dylan’s, but it’s her voice, heavy with experience, that performs the transformation. Recorded in 1971 but not released until 1985, it has the world-weariness you would expect from the latter date, but the freshness of the former.

Empire Burlesque is quite possibly Dylan’s worst album ever. None of it should detain anyone bar the obsessive, except for its final song, ‘Dark Eyes’, a stark, arresting ballad free of the crass over-production that kills the rest of the record. Judy Collins then takes this raw original and uncovers gold, helpful by her pure vocal and a delicate piano riff. Breathtaking.

This is said to be Bob Dylan’s favourite among all the covers of his songs. Possibly that’s because of the singer, but I’m no Presley fan yet I think this is marvellously judged. Plenty of artists have taken this early ballad and produced something tremulous and heartfelt. Presley’s 1966 version chooses an easy country beat with acoustic guitar breaks over which he sings with perfect tone. Controlled as it may be, it is also absolutely moving, as you sense that Presley (who apparently knew nothing of Dylan beforehand) realised he was uncovering something quietly beautiful. A simple masterpiece.

OK, that’s enough of this post. Here’s the full playlist, all the way from Odetta to Jackson. Eighty songs, in chronological order of composition, with no song repeated, though a few artists appear more than once (Nina Simone, Patti Smith, Fairport Convention). Well, I enjoyed putting together anyway (and will probably add a few more songs to it in time).

Missing from this post on Bob Dylan covers is anything about jazz versions. I found this subject so intoxicating that it demands to be the subject of a post of its own.