Such uncertainty is not reflected in many a written history of the medium. In these, the story is expressed in easy stages: from experimentation, to invention, to illumination, to commercialisation. In this simple history, the work of the Lumière brothers, Louis and Auguste, is paramount. The one thing someone is likely to know about the birth of cinema is that the two French brothers were pre-eminent, and something about people supposedly running away from film of a train approaching at the first film show. And with that lesson in the medium’s roots we can moved on quickly to lesson two, D.W. Griffith, and engage with a cinema that we can recognise.

Why has the legend of the Lumières come to loom so large? It has something to do with the pride of a nation traumatised by defeat in the Franco-Prussian War (1870) which seized on certainties that would confirm its cultural strength in the competitive world of the twentieth-century. It has something to do with the cult of invention, the belief in a perfect coming together of conception and realisation (such as is seldom experienced in reality). But it is also has much to do with the very excellence of the films that the Lumières made. What other medium could boast such a creative, mature body of work with which launch itself on the world? For some, cinema has yet to improve on the outstanding start that it made. 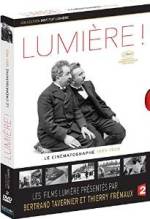 This is demonstrated in the marvellous two-disc DVD/Blu-Ray set Lumière!, recently published by France Télévisions Distribution and the Institut Lumière. It presents 114 of the 1,422 films made for and by the Lumières over the period 1895-1905. The films have undergone a 4K digital transfer, with startling results. We cannot say if the films ever looked quite so good at the time, given the vagaries of the contemporary technology and its operators, but they certainly look better than most of us will have experienced up until now. For those accustomed to grey-ish Lumière short films shown on 16mm in film study classes, or the much-copied titles that have ended up on YouTube, the films on Lumière! will come as a revelation.

Equally revelatory will be the range of films on offer. The Lumières, having shot their initial films over 1895 and early 1896 themselves – often domestic scenes featuring family members – sent out operators around the world, to exhibit their Cinématographe camera/projector, and to take new films to add to the Lumière catalogue. The Lumières managed a photographic material business, and had extensive contacts upon which they could build this new business. They had a clear vision of what to film: for the most parts, postcard-like views of celebrated places, a gazetteer of the renowned. The films on Lumière! shows scenes from France, Britain, Egypt, Indo-China, Russia, Ireland, Spain, Switzerland, the USA and Japan. There are views from a balloon in flight, ascending the Eiffel Tower, upon an Alpine glacier, in an opium den, and on a London football field. It is the world of 1900 from every conceivable angle, sparkling before us as though filmed yesterday.

But it is not what was filmed, but how it was filmed, that is so magical. Practically speaking, all Lumière films were exactly the same. There was 50 feet (17 metres) of film available for a Cinématographe operator, and consequently all the films are of equal duration. The camera stayed in a fixed position – there were some travelling shots, from trains and boats, to give a panoramic effect, but there is none of the arsenal of cinematographic techniques that would follow in the Lumières’ wake. There are some fictionalised films and records of performers, including dancers and a puppet skeleton, but for the most part the films are studied actualities.

It is these constraints that formed the great art of the Lumière Cinématographe – that, and a talented team of photographers trusted to do their masters’ bidding (Alexandre Promio, Gabriel Veyre, Charles Moisson, Marius Sestier et al). They captured le moment juste. They composed their images with the greatest care, filming in bright sunshine for the sharpest image, and determining the ideal combination of lateral interest and action in depth. They are compositions in the finest photographic sense.

But there is more to Lumière films than that. In a famous essay, ‘Let there be Lumière‘, the late Dai Vaughan wrote on how the films’ special quality was that they were created at a time before audience assumptions about cinema existed. With later films,

[a]s audiences settle for appearances, according film’s images the status of dream or fantasy whose links with a prior world are assumed to have been severed if they ever existed, film falls into place as a signifying system whose articulations may grow ever more complex. True, the movement of leaves remains unpredictable; but we know that, with the endless possibility of retakes open to the filmmaker, what was unplanned is nevertheless what has been chosen: and the spontaneous is subsumed into the enunciated.

Writing of the Lumière film Barque sortant du port (1895) (sadly not included on Lumière!), which shows a boat heading out from a harbour from which a small group watches its departure, Vaughan says that it

begins without purpose and ends without conclusion, its actors drawn into the contingency of events. Successive viewings serve only to stress its pathetic brevity as a fragment of human experience. It survives as a reminder of that moment when the question of spontaneity was posed and not yet found to be insoluble: when cinema seemed free, not only of its proper connotations, but of the threat of its absorption into meanings beyond it. Here is the secret of its beauty. The promise of this film remains untarnished because it is a promise which can never be kept: a promise whose every fulfilment is also its betrayal.

It is a beautiful conceit, maybe a little too beautiful. Lumière films were not the first films; the brothers had been inspired by the Edison Kinetoscope peepshow with its earthy records of variety acts, and the chronophotographic brevities of the German inventor Ottomar Anschütz. There had been many optical toys depicting motion which had played their part in building up an expectation of the reproduction of movement. The Lumières were already working within a tradition, which many of their audience would have understood as well as themselves. Vaughan’s view is one who is trying to divest himself of a subsequent cinema history; it is acute, but nostalgic.

I would say that what distinguishes Lumière films is their sense of endless time. In some way akin to the repeated significations of movement displayed by optical devices such as the Zoetrope, or the one-second-long image sequences on a rotating disc that Anschütz’s ‘Electrical Wonder’ machine showed, the films of the Cinématographe offer the promise of unceasing repetition. Lumière were not shown on a loop, and their actions generally show a beginning and an end. But there is something of the eternal about them. That train will always be approaching the station, that boat will always be leaving the harbour, those leaves will always be fluttering the background as the proud Auguste and Marguerite Lumière feed their daughter Andrée (in Le repas de bébé), the movement of which so transfixed audiences at the time. They are films that we seem compelled to watch over and over again, trying to unpick their mystery. Reports from the time indicate that the original audiences were driven by much the same compulsion.

Early commentators wrote of how Lumière films offered the illusion of immortality, a simulacrum of life itself. This, I think, derived not simply from the illusion of life replayed that motion pictures offered, but the formulaic, repeatable actions that the films preserved – walking, marching, feeding, dancing, playing. Here was the unending round of life, such as had been mimicked by earlier optical toys, but now made startlingly real through moving photographs. It was what must have so entranced those first audiences, to see the familiar made eternal. They were animated pictures – pictures with the soul of life (anima) breathed into them.

There is much more to see in this DVD set. It is a tour around the world, collecting what were in most cases the first moving images produced in the countries featured. It is a telling document of the comfortable world and fixed outlook of the French bourgeoisie. It is a collection of many examples of great cinematographic art, such as the dazzling backward tracking shot filmed by Gabriel Veyre in Indo-China (Vietnam), Le village de Namo (1900), one of my top ten favourite films. It is a collection of many iconic films that are essential for anyone professing themselves to have a knowledge of cinema.

Lumière! is a handsomely-produced set, with much care having gone into its presentation. It is very much a French production, with ne’er so much as a word of English on the box, booklet, titles or commentary. The films are divided into chapters, from first films, to scenes of France, to scenes overseas, to comedies, and so on. You can watch the films silently, or with commentary, or with music (Camille Saint-Saëns obliges), or with titles giving production information – and choose whichever permutation of these suits you. A second disc comes with an assortment of films with background information and expressions of enthusiasm from the great and good of film. Aside from the absence of multi-lingual options, my only criticism would be the limitation of dividing the films up into chapters, when one would like to have the option of going direct to individual films.

One can feel some resistance to the cult of the Lumière brothers, who have been subject to a little too much uncritical hagiography. The legend has been protected to a point where it becomes unhelpful. There is no good critical history of the Lumières. There have been no proper studies, that I know of, that explain in full how their business worked. There is no good (or even bad) website devoted to them [Not so! See comments]. It has been made too difficult for a general audience to see these films – it is very late for an official DVD issue like this to have been produced. A braver, more imaginative gesture would have been to release every film onto YouTube (or Daily Motion, its French equivalent) for free and let a new audience discover the films and make of them what they will. But the legend has to be protected, or else it ceases to be a legend. More’s the pity.

A trailer for Lumière!