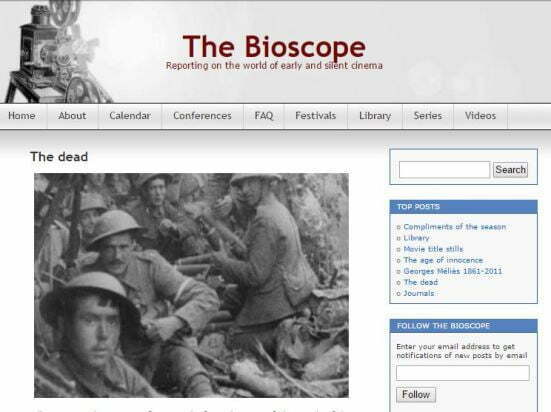 As previously noted, I am republishing a number of old posts from blogs that I have previously managed that are now defunct and/or difficult to find. I’m republishing them with the date adjusted to the date on which they were originally posted, so that gradually this site will build up to be a single source for things that I’ve written. Not everything, but the parts I’d like to keep in one place. So it’s the selected works rather than the collected works. I started with posts from my now defunct British Library blog Moving Image, and later on I’ll be adding texts of talks and papers that I’ve given that I currently only make available in PDF form. But here I’m reproducing posts from The Bioscope.

The Bioscope was my blog on early and silent cinema, which ran from 2007 to 2012. It was quite successful, in that it had a strong following and I think achieved its aim of being a useful reference source put over in a readable fashion. I stopped writing it in August 2012 as I felt it had run its course, but it has stayed online (and continues to attract readers) because it’s not good producing a reference source and then not making it available.

So it’s a bit odd – and it may even prove a bit confusing – to reproduce some of the Bioscope posts here, since they can be easily found elsewhere. But my ultimate aim is to have most things in the once place, so I shall press on with it. I won’t be copying across all Bioscope posts, however. The vast majority are inconsequential – information on upcoming film festivals and the like – and others are too specific to The Bioscope itself, such as those with long comment threads.

I’m going to do this in stages, because the posts need a bit of tidying up (checking links are up-to-date etc). Here are the first seven, which happen to be particular favourites of mine. More will follow in due course.