I have begun writing the lives of two people. I have been given 1,000 words in which to encapsulate the achievements, character and significance of two filmmakers, George Pearson and Albert E. Smith. It’s a commission from the Oxford Dictionary of National Biography, for which I have written several such short biographies already, on Arthur Pearson (newspaper publisher), filmmakers G.B. Samuelson, Walter Haggar, Charles Urban, Percy Smith, and film archivist Ernest Lindgren. Some are hack work; some I’m quite pleased with (the piece on Lindgren probably hits the mark best).

I picked Pearson and Smith from the list of candidates awaiting authors because I know something of both, know where the main sources are, and admire them both. George Pearson was a British film director at his height in the 1920s, whose work has a distinctive and special charm, an expression of the character that comes through in his delightful autobiography Flashback. Smith was born not far from me (his family came from Faversham), and went from being a magician to an early film mogul with the Vitagraph Company of America. He was a savvy operator who produced a singularly misleading memoir, Two Reels and a Crank, which I shall be using only with the greatest caution. I’ve also written a short account of his life before now.

So I start out by exploring the basics: the published memoirs; the surviving papers; the family history sources with census records, birth, marriage and death certificates; the wills and probate records; the online newspaper archives; and, yes, even checking their names on web searches to see what clues might emerge. Then will follow visits to archives and libraries to check film trade papers, personal papers, histories, biographies, and maybe some film viewing too. I will build up chronologies, filmographies and family trees. As required by the ODNB, I will identify film, sound and pictorial records of the two men, where these can be found.

Having amassed all this information, I must boil it down into 1,000 words. There is a scale of word-length according to the perceived importance of these figures, and neither merits the extended entries of a major artist, politician or other public notable. I deal in minor figures.

But how can a life be encapsulated in so short a space? What is one capturing? The art of the dictionary of biography, the encyclopedia entry or obituary is to mix the essential with the memorable. One must record the expected highlights, suggest something of the character, thrown in an anecdote or two, and create a summary judgement. That summary judgement, which is so important, is generally your final paragraph (though it may be followed by standard stuff such as death and family details, depending on the conventions of the publication for which you are writing). It is the estimation of a life in three or four lines. It says that we leave behind our works and other achievements, but who we really were can be – and may be should be – rounded up in a few, hopefully well-chosen words from a stranger.

That ‘stranger’ element is key. The biography long or small written by someone who knew their subject has a different quality, one which almost says I know better of this person than you the reader ever will. The professional biographer who does not know their subject personally, most often because the subject is an historical one, has a different quality too. They have spent enough time with the subject to become a close acquaintance of sorts, exuding an authority bred of supposed intimacy and professional know-how. We who write brief lives are of a different kind. 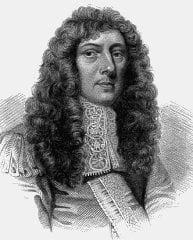 Brief Lives is the name given to a collection of short biographies collected by the British antiquarian John Aubrey (left) at the end of the seventeenth century. Some finished, some a collection of notes awaiting completion, they were never published in his lifetime, and only edited and made public in the nineteenth century in various expurgated forms. He started out on his task at the behest of Oxford scholar Anthony Wood, who was producing a volumes of lives of those who had studied at the university. Aubrey therefore gathered evidence that the ill-tempered and ungrateful Wood could then turn into a finished product, but having handed over his rough texts to Wood, he then carried on with collecting lives on his own account.

Aubrey loved truth and he loved anecdote. He applied his antiquarian passion to the collecting of evidence, in the spirit of the scientific empiricism of the seventeenth century that that gradually overturning the myth, magic and received wisdom of past ages. He sought out eye-witness testimony, and applied his own knowledge of a subject wherever possible. He did not greatly discriminate between the observed and the reported, and that has meant that his Lives have been criticised for their occasional credulousness, but it is what they tell us of a life that is so important. Aubrey captured people as they had been remembered, or as they might be remembered.

He was an ingeniose man, and had a philosophicall head; he was most curious for graffing, inoculating, and planting, and ponds. If he had any old dead plumbe-tree, or apple-tree, he lett them stand, and planted vines at the bottome, and lett them climbe up, and they would beare very well.

He was one of my councell in my law-suites in Breconshire about the entaile. He had a kindnesse for me and invited me to his house, and told me a great many fine things, both naturall and antiquarian.

He was very facetious, and a good musitian, playd on the organ and lute. He could compose.

He was much troubled with flegme, and being so one winter at the court at Ludlowe (where he was one of the councesellours), sitting by the fire, spitting and spawling, he tooke a fine tender sprig, and tied a ragge at the end, and conceited he might putt it downe his throate, and fetch-up the flegme, and he did so. Afterwards he made this instrument of whale-bone. I have oftentimes seen him use it. I could never make it goe downe my throat but for those that can ’tis a most incomparable engine. If troubled with the wind it cures you immediately.

Here is a life – or part of a life – revealed through those small details which made the person memorable. The entry on Rumsey notes his legal achievements, but is drawn chiefly to the curiosities of his character. We are told enough of Rumsey’s career to understand why he merits appearing in this collection, but then he is drawn to the life as lived. We can see Rumsey fussing about in his garden, receiving guests cheerfully, and worrying continually about his health. In Aubrey’s pages, he is fussing, conversing and worrying still, into eternity.

Aubrey’s notes on William Shakespeare are valuable because they record impressions people had of him, or had heard reported of him, that would otherwise have been lost and which contribute significantly to the portrait we have of the man. It is thanks to Aubrey that he know that Shakespeare was believed to understand Latin “pretty well”, that he had been “in his younger yeares a schoolmaster in the countrey”, and that “he was want to goe to his native countrey [i.e. Stratford] once a yeare”. Maybe true, maybe not. He records what we know to be certain false reports, such as the intelligence that Shakespeare was the son of a butcher, but what is important is that he noted what he found, not what he expected to find. Earlier biographers moralised, fitting their subjects into a framework from which lessons should be drawn. Aubrey discovers.

What I like most about Aubrey, however, is his title: Brief Lives (his actual title for the collection was Schediasmata: Brief Lives – ‘schediasmata’ means ‘rough notes’). These are not lives which can only be championed in weighty volumes. These are not only the lives of the great. They champion brevity. They understand what is memorable, and through that make those people live again. It is a poetic process: the concentrated understanding of what is true.

I have contributed to brief lives beyond writing for the ODNB. Apart from encyclopedia entries and the like, in 1996 I co-edited, with Stephen Herbert, a volume called Who’s Who of Victorian Cinema, which lives on as an website. The book contained “300 biographies of those who, behind and in front of the camera, played a significant part in creating the phenomenon of moving pictures”. The website has allowed us to add more names, and we continue to do so. The aim of the the book was to be a reference work of value to those studying the first years of cinema, but it also sought to expand the understanding of what cinema was by looking beyond inventors and filmmakers to the subjects of those films (dramatic and actuality), to those who commented on them, exploited them or who were significantly affected by them. It also placed character on a par with technology, and my view of the book was that it was more of a novel than a reference work as such, with a worldwide cast of interconnected characters each of whom had been affected by the phenomenon of motion pictures and found their different lives irrevocably changed by the process.

I knew none of those about whom we wrote personally, and only one or two had been known at the end of the lives to other contributors. We wrote what we could find from the surviving documentary evidence, and leavened this with such traces of character was we could find reported. We composed brief lives.

‘Brief lives’ means not simply lives in brief, but lives of less consequence or scant evidence for which we may only have scraps to suggest to us what someone once was. Aubrey writes of John Spiedell only that “he taught mathematiques in London, and published a booke in quarto named Spiedel’s Geometrical Extractions (London, j 63-), which made young men have a love to geometrie”, and of William Sutton, “came to Ch. Ch. Oxon at eleaven. He wrote much, but printed nothing but a little 8vo against the Papists.” Such things are all that we may leave behind us. Yet it is good to have left something.

Now I must sum up the words to unpick how a schoolmaster made the bold leap to become a film director with a distinctive vision, and how a two-bit magician touring America saw in the invention of motion picture something that would make his fortune. I must get the facts right, but also find the poetry, and the poetry will be in the brevity.