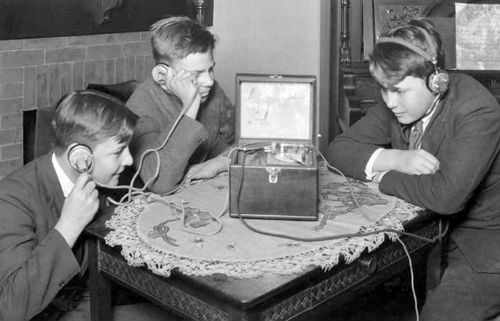 The BBC has just celebrated its ninetieth anniversary (November 14th to be precise), though the current storm clouds hanging over the Corporation have possibly dampened the fervour. Nevertheless the BBC has marked ninety years of radio broadcasts (BBC television did not begin officially until 1936) in a number of ways, including Radio Reunited, a simultaneous broadcast by Damon Albarn, and the 90×90 broadcasts of highlights from its radio archives from the 1920s to the 2010s. There has been the launch of the Listeners’ Archive project, in which the public has been invited to hand in off-air radio recordings they may have made to help augment the BBC archives, and there have been celebrations of Sir David Attenborough’s sixty years of broadcasting – a remarkable two-thirds of the BBC’s existence.

One of the most notable productions to mark the ninetieth has come not from the BBC but from my colleague Paul Wilson, radio curator at the British Library. His post for the BL’s Sound Recordings blog, Tuning in on the first days of broadcasting, is a gem. Paul writes about a priceless archival discovery – the diary of a 16-year-old radio enthusiast, Alfred Taylor, who kept his ‘Wireless Log’ for twelve months between October 1922 (three weeks ahead of the first BBC broadcast) through to 1923. Written as a response to Albarn’s question “Who was listening?” (i.e. to the first radio broadcasts), Paul explains the who, how and where of a time when there were approximately 50,000 radio licences issued.

For the details I refer you to Paul’s knowledgeable and very readable post, illustrated as it is with extracts from Taylor’s log. What is so precious is this solid evidence of the audience. Nowadays, when there is so much audience research, gathered either personally or electronically, it is a shock to turn back to past decades of media history and find so very little surviving that documents the experience of the reader, the viewer or the listener. Taylor’s Log notes not just the broadcasts he heard, but conditions under which he heard, what he thought about the broadcasts, and who else was dropped in at his Lincoln home to listen to the new miracle that was radio. As Paul notes:

Taylor’s log shows that for every one of these licensed “enthusiasts” [the 50,000] a great many more people, owning neither licences nor equipment, made up the bulk of the first radio audiences. They were the friends, family and neighbours who dropped in to share the revelatory experience of listening for a few minutes here and there, whenever they were allowed.

We see radio spreading socially, weaving itself into the fabric of the nation, each day by day. It’s a precious thing to be able to see the first radio listings for this period (the Radio Times itself was first issued in September 1923), but so much more precious to witness radio’s reception (in every sense of the word – the Log frequently records the challenges of picking up broadcasts from the 2L0 and 2ZY transmitters). It puts us – the listeners, the viewers, the readers – at the heart of the history, rather than the producers or the performers. So much media history, and art history in general, takes the audience for granted, but it is the audience that makes the art, or the media, ultimately. So little exists of audience reception of media in the early years of the twentieth century that is no great surprise that audiences play little part in the histories that exist (the work done here on film reception has greatly expanded in recent years, which is most welcome). Now here’s a discovery to make us think again what else might be there in the way of diaries, correspondence, private notes and enthusiasts’ logs which could help re-orienteer media history towards those wearing the headphones, turning the dials, tuning in, giving it all meaning.