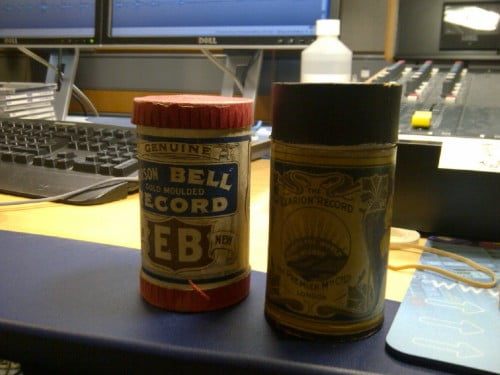 A few months ago I came across two wax cylinders in an antique shop in my home town of Rochester. They both had beautiful cardboard tube covers, one for Edison Bell, the other for Clarion, though as I was to discover the cylinders inside did not match the desciptions of the music on the outside (which promised George Robey and a ‘comic’).

I was thrilled at the discovery, and they looked good on the mantelpiece, but I work at the British Library where we have one of the world’s leading sound archives, and eventually curiosity and conscience got the better of me. I took the cylinders into work, and donated them to the nation, asking only that I receive a digital copy and get to see the cylinders being transferred.

They weren’t in the best of condition, the wax having suffered a little through mould and no doubt through having been played many times. Tom Ruane, one of our audio engineers, placed the first cylinder on a slightly tapered spindle (the cylinders are hollow and narrower at one end) on a customised player with variable speed. To keep the cylinder steady Tom made highly scientific use of bits of cardboard stuffed at the edges, plus a rubber band to prevent the cylinder from slipping.

There was some to-ing and fro-ing while we tried to work out what whether it was best to use a stylus suited to a 2-minute or 4-minute cylinder (the narrowness of the grooves varies), but eventually we found the right size and after a few test runs, we played it through.

As the video shows, there is all the damage to the sound that you would expect after the wear and tear of time, but beneath the crackle there is the bright, clear sound of what is announced at the start as the Edison Concert Band. I can’t make out the name of the march that he gives, but it turns in somewhat unusual fashion into ‘The Star Spangled Banner’ halfway through. The video shows the digital transfer taking place, with wave forms and colour bars and such like, the result of which was an archival standard WAV file and an MP3 access file for both cylinders. The second cylinder features a male singer (again, I can’t make out the name) singing a rather mellifluous number, ‘Bluebells’.

I’m fascinated by early sound technologies, not because I am expert in them but precisely because I am not. I can dimly understand what’s going on, but I don’t have the full historical or technical picture and don’t properly understand how everything connects. What I find valuable in this is the comparison with early film history, with its many cross-relationships with sound (the Edison film and sound companies being prime examples). I know exactly where I am with the history of film in its first years, recognising how any one artefact from the period connects with others, what exists or does not exist, what is important, what place it has in the historiography. Comparing what I know about early film with what I know about early sound makes me realise how confusing the early film world must be for most, and how it is good to be a guide, just as Tom knew in an instant the nature of the cylinders, their condition, significance and historical place.

We each of us play our part in making things clearer for all.