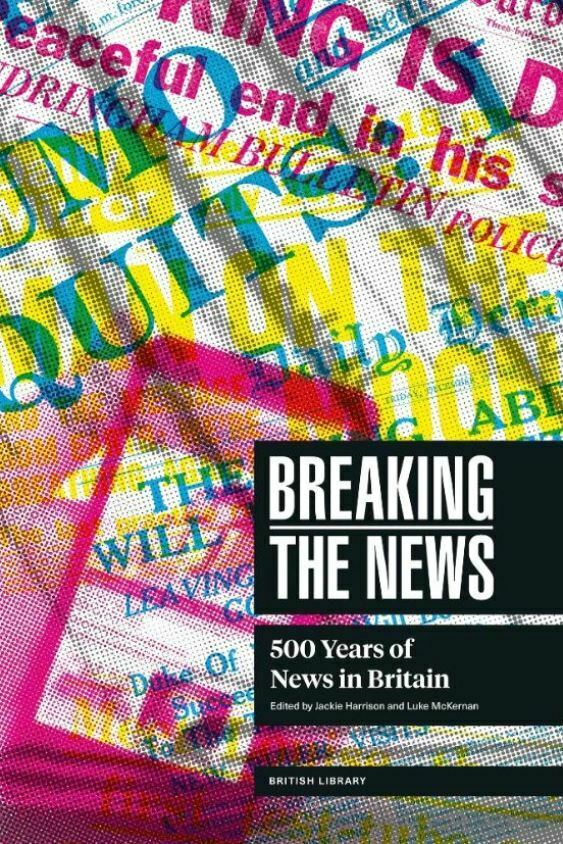 Such has been the flurry of business surrounding the British Library’s exhibition on the history of British news, Breaking the News, that I have neglected to mention here what should be its most lasting legacy: the book.

So, at the end of April 2022, the British Library published Breaking the News: 500 Years of News in Britain, edited by Jackie Harrison and myself. Jackie is Professor of Public Communication (amongst other titles) at the University of Sheffield; I am, for the time being, Lead Curator, News and Moving Image at the British Library, and lead curator of said exhibition.

The book is a little different to the average exhibition book. These tend either to be catalogues of a kind, describing and illustrating every object featured in the exhibition, or a collection of essays with glossy illustrations of highlights among the exhibition objects. In either case, the books are big – objects maybe to be read but more often to be admired, a handsome record of things seen. The stuff of coffee tables.

Breaking the News follows its own path. For a start, you can pick it up in one hand without causing damage to yourself. It is a book designed for easy reading. Secondly, though the book has illustrations of objects featured in the exhibition it has several that do not feature in the exhibition at all. It is a book inspired by the exhibition but not religiously following it. We did decide that the book should follow the broad structure of the exhibition, one based around big questions such as Can the News Ever Be Objective? or What Does a Free Press Mean?, with subsections on aspects of the questions, such as Suppression, Alternative Facts, Crossing the Line, or Public Interest. But we told each of the authors we approached that they did not have to be constrained by the objects featuring in the exhibition in their subsection, just so long as they referred to at least one. A writer could base their essay on that subsection’s objects alone, if they wished, but so long as they mentioned one relevant exhibition item they could roam as widely as felt right. The choice was theirs.

Next, we asked the writers to tell stories. The exhibition is based around published news objects that relate a strong story, and we wanted the book’s chapters likewise to have storytelling at their heart. When such multi-author exhibition books are put together, you usually turn to academic experts in the field, and that’s what we did. But many of those teaching news history and journalism in our universities were journalists before they became academics. Their roots lie in telling news stories. A further means of achieving a newsy feel to the book was to keep the chapters short. There was a word count for 3,000 words for most chapters; 2,000 for those describing the different kinds of news events in the What Makes a News Event? section. For example, the late Brian Winston, a distinguished academic, filmmaker, polemicist (and friend) produced an essay on 500 years of reporting conflict, from the Battle of Flodden to the Civil War to Waterloo to the Crimean War to World War Two to Syria, taking in newspapers, pamphlets, newsreels, television, radio, from propagandists to war correspondents to embedded reporters – all in 2,000 gripping words.

The key to good news is telling compelling stories.

The result is, I think (and others have been saying), an academic work with a real popular edge to it. Or else a popular work with real academic value. It tells the story of 500 or so years of published news in Britain with an immediacy that makes the news of yesterday as immediate and important to us as the news of today. Or so we hope. We had some worry, in constructing both exhibition and book, about the intellectual validity of bringing together news stories on ostensibly the same theme over five centuries. But every time the writers were able to prove the point. In the section on Disaster, for example (written by historian Joad Raymond), what are the actual links between the Great Fire of London or the Lisbon earthquake of 1755, viewed at the time in terms of religious judgment, and Aberfan or Grenfell Tower, when the faults we understand are human? Raymond, and all other contributors faced with the same task, identifies the underlying threads (based on our hopes, fears and narrative expectations) that make yesterday’s news still news for us today.

We were indeed fortunate with our eighteen writers, who aside from anything else had to work to a very tight deadline (initial invitations went out in April 2020; we had almost all corrected text in by January 2021). Only one invitee turned us down; only one was dropped after disagreement. Our contributors included academics, like Jackie Harrison, from the University of Sheffield: Tony Harcup (Suppression), Adrian Bingham (Partisan Press) and James Whitworth (Satire); an MP-turned journalist, Matthew Parris, close eye-witness to the fall of Margaret Thatcher (Power); journalists-turned-lecturers George Brock (Scandal), David Dunkley Gyimah (Language) and the versatile Kurt Barling (Alternative Facts, Image, and Public Interest); esteemed newspaper historian Laurel Brake (Crossing the Line); and film historian Linda Kaye linking Covid-19 to past public information campaigns (Persuasion).

The exhibition’s curators contributed in like manner: Maddy Smith journeying from witchcraft trials to Jack the Ripper (Crime and Sensationalism); Tamara Tubb bringing together Lord Byron, the Rolling Stones, and the story that could sum up our times, Coleen Rooney vs. Rebekah Vardy (Celebrity); while I took on the ‘boy on the hospital floor’ story from the 2019 General Election (Verification) and a bold coming together of 19th-century Black boxers, the 2012 Paralympic Games, the Moon landing and the title sequence from Cheers (Celebration). Beth Gaskell graced us with thirteen short biographies of notable news figures, ranging from William Hone (look him up) to Greta Thunberg. Interspersed between the main chapters, these ‘News Breaker’ interludes have been one of the book’s most popular features.

There is also an introduction from news broadcaster Samira Ahmed (who chaired the exhibition’s advisory board) and Jo Fox, Dean of the School of Advanced Study, supplying a thoughtful afterword on the future of news.

Oh, also a guide to the British Library’s news collections, and a timeline marking over 500 years of British news production and allied areas, from first printing press in Fleet Street (1500) to Twitter suspending the account of Donald Trump (2021).

News is horrifying, exciting, boring, uplifting, depressing, exhilarating, infuriating, essential, the crazy mirror in which we view our worlds and hope to understand them. Why not read all about it?