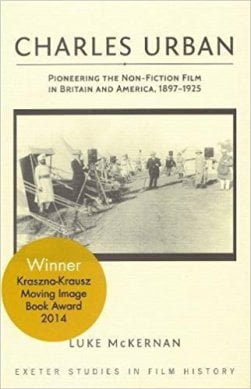 I’m delighted to be able to report that my 2013 book, Charles Urban: Pioneering the Non-Fiction Film in Britain and America, 1897-1925, is now available in paperback, from University of Exeter Press. Previously available in hardback at a price best suited to the specialist library market, or as an e-book (has anyone purchase Urban the e-book? I’d love to know), now – while not exactly being at a supermarket-giveaway price – it might be a little more within the price range of those with an interest in early cinema, documentary film, colour cinematography, propaganda, educational theory, the First World War or several other topics covered by Urban’s various, event-filled career.

The paperback is exactly the same as the hardback, except that it comes with a sticker on the front saying that it won an award, which is bound to lead to it being piled up invitingly near the window at your nearest Waterstone’s. Well, maybe.

If you feel you need to know a bit more about Urban before the modest investment required, there’s my earlier post about the man, written when the book first came out, or you can read more on my Charles Urban website.

This is clearly Charles Urban’s year, as a few months ago the Cineteca di Bologna issued a 2-DVD set of Kinemacolor films plus other colour productions from the same period, the first such public video release of any Kinemacolor films. Kinemacolor was the motion picture colour process that brought Urban fame at the time (1908-1915) and a place in the film history books. Kinemacolor and Other Magic is available in Region 2 format – 36 films (185 minutes all told), 4 handsome extras and a 72-page booklet with text in English and Italian (some of written by me).

Needless to day, book and DVD combined would make an ideal combination, as a festive gift or a personal purchase. Go on, treat yourself…

2 thoughts on “Now in paperback”