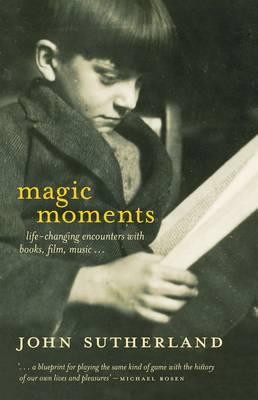 I have been reading Magic Moments by the literary critic John Sutherland. It is a memoir constructed around the books (and some films) that he experienced when young, viewed again from the perspective of its subject six decades later. It’s an ingenious way of constructing a biography, with each chapter devoted to the stories he experienced, ordered chronologically, from Wind in the Willows to The Cruel Sea to Lady Chatterly’s Lover to The Uses of Literacy. The early chapters, where the adult Sutherland most intervenes to augment the young Sutherland’s impressions, occasionally jar, but as the book develops the sense of discovery and development through reading becomes engrossing. In particular Sutherland is good at drawing out what was special about some of the less obvious works that he encountered, including Max Shulman’s cynical war novel The Feather Merchants and an obscure pulp novel The Tenement Kid. He also shows how much the cinema led people to reading, and how books and films co-existed in people’s imaginative world. It’s a book to make you list those works that made the greatest impression on you in young life, and to rethink your biography accordingly.

One thing distinctive about the book is its use of notes. There are no conventional footnotes or endnotes, and no index. Instead Sutherland provides weblinks. Wherever he wants to draw your attention to background information on a subject in his text, he gives an asterisk. At the back of the book is a section entitled ‘Portal Notes’, divided up by chapter, giving page reference, and a list of URLs for the subjects he has raised. There are no other kind of notes except these links with the instruction to find out more by following them. He also produced a website, http://www.magicmomentbook.com, which provided all these links live, with a facility for readers to add comment and criticism. He promised to keep the site updated for a long as the book remained in print.

Needless to say, things look rather different in 2017. The book is out of print, and the web address no longer works. You can find an archived version of the site on the Internet Archive, though finding it is not straightforward. Only a few of the pages or links have been preserved, and each can only be hunted down through a chain of intervening links. And of course so many of the links no longer work.

Sutherland’s aim was to think beyond the physical limitations of a book. He explains:

Books, once published, are fixed things (recent revisionary book history has suggested that this aspect of the printed word was a hindrance, not a help, to the expansion of scientific knowledge in the Renaissance, overturning more heroic views of Gutenberg’s revolution). The World Wide Web, by contrast, is dynamic and fluid. Nowhere is Keats’s ‘written in water’ more true.

Indeed these were words that were written in water, for so much of the supporting paraphernalia designed to extend Magic Moments beyond the physical confines of a book has disappeared. What is interesting is that Sutherland promises only that the site would last as long as the book was in print, and his reference to John Keats’s famous epitaph shows that he expected there to be loss. Site, links, the fuller promise of an interconnected world, all had to be time-limited, there for a period and then to be washed away.

But an out-of-print book can still be read, while the ruins of a website on the Internet Archive, signposting texts that are there no more, brings only frustration.

Sutherland’s idiosyncratic referencing strategy says much about the generally futile, and certainly time-limited, efforts that there have been to link physical books to the shifting world of the web. It also points to the problems authors, publishers and readers have with notes generally. Many authors love their notes, of course, to the extent that the notes can end being more important for some that the text that they are supposed to support. Some treat the endnote as an opportunity for digression, relating whole narratives that might not otherwise have been fitted into the text, while I remember one manuscript that a publisher asked me to review, for an author now deceased, who had 327 endnotes for one chapter alone. The main text had disappeared within the superstructure supposedly there to support it.

But endnotes are also a chore, which eat up pages that might otherwise be given over to your argument, and who reads endnotes anyway? Publishers dislike them, because readers don’t like them, and many a writer torn between academic respectability and the desire for some actual sales has agonised over dropping the apparatus to make their work look like it might be an enjoyable read rather than a scholarly duty. Increasingly such authors seek the escape route of the bibliographic essay, a readable summary of those sources they used, sometimes covering the whole books, sometimes chapter-by-chapter.

Readers – aside from one’s academic peers, who will always be few – dislike endnotes greatly. They feel threatened by them, those superscript numbers in the text somehow ordering them to stop what they are reading and turn to the back, where they would rather not go. Notes upset the flow of reading. Notes break the spell.

Of course there are uncommon readers who enjoy endnotes. I am one of them. I am quite fussy about this though. Too few notes to a chapter and I feel the author is being insufficiently honest. Too many and I find, as with those other readers, that the parade of superscript numbers is oppressive, and the author has thought more of their research than the poor soul who is trying to read it. If the notes themselves are a purely functional list of titles, publication details and page references, then I feel disappointed. Endnotes should offer some sense of adventure – they should be readable, not purely functional. So I welcome those that reveal small stories in themselves, or illuminate points further, but if such notes start to ramble for their own sake and there are too many of them that are too wordy, then I am annoyed, and wish that the editor had been able to exert a bit more discipline upon the self-indulgent author. Over-wordy endnotes show bad manners.

And of course there is that special joy when you find that you yourself are an endnote. Someone has read you, found something that you said to be useful, and conferred respect on your own work by citing in in theirs. Google Scholar is built around the citations in endnotes, so that the academic writer can see instantly where of their texts have earned the respect of your peers, with what frequency – and equally which text over which you may have toiled for months if not years, has had few or no citations, brutally confirming that nothing you had found has been deemed worth sharing.

I am talking about endnotes rather than footnotes because the latter are rare these days. Authors cherish them because they draw the reader’s eye immediately to the source of the research knowledge, but publishers have rebelled against such a typesetting nuisance. You get them still with Shakespeare texts and the like, but not much else. Kevin Jackson, in his entertaining book about literary paraphernalia such as dedications, epigraphs, blurbs and indexes, Invisible Forms, has a chapter on footnotes which is of course heavily annotated with footnotes. Jackson notes how the note becomes a conversation between reader and writer, the latter speaking in two voices – that of the text and that of the supertext. For the writer it is a way of declaring your understanding; for the reader there is the pleasure of being the sort of person who reads books that have footnotes. You must be smarter, just for having been drawn to such a book. Anthony Grafton has written a whole book on the subject, The Footnote, covering the history of a mechanism which has made the humanities verifiable (or disprovable), contributing greatly to the growth of empirical scholarship over mere opinion.

But neither Jackson or Grafton mention endnotes (nor do their books feature them). Footnotes are an indulgence; endnotes are practical. They maintain the scholarly apparatus, they make things verifiable, but they hide the matter as far as they are able. The footnote is a form of conversation. The endnote divides up the author’s personality – the main text tells the story, the endnotes are in a separate yet connected voice, almost confessional, explaining how the magic trick was performed, revealing the construction to be an act. Endnotes must disappoint as much as they impress.

Endnotes therefore become a challenge for the imaginative writer, the challenge being to have all speak with once voice, integrating them into the main text while still asserting their separateness. John Sutherland’s Magic Moments shows one way of doing this, connecting the text to the virtual world the author used to trigger and augment childhood memories. Numerous writers of fiction have played with the footnotes as a subversive device (Flann O’Brien, Garrison Keillor, Nicholson Baker), but few have played such games with endnotes. Probably the best-known example is Vladimir Nabokov’s Pale Fire, in which the commentary on a poem takes on a life of its own and becomes the real story. But Nabokov’s annotations are not true notes, because they go on for too long, used by the supposed editor of the poem, Charles Kinbote, to reveal his own absurd story. Nabokov’s notes never convince us as notes, for all that we can enjoy the game that he plays with scholarly apparatus and the voice of the writer.

Instead, my favourite example of the endnote as the true substance of the book that it graces is Walter de la Mare’s Desert Islands. This unique and delightful book presents the reader with seventy pages of a romantic talk on the nature of desert islands, and then 213 pages of endnotes that support the writer’s argument. Each note works as a reference to a point made in the text, but then rambles off on its own, bringing in a whole archipelago of stories of people lost on desert islands, plucked from history, myth and fiction – Quiriquina, Pentan, Jamaica, Galapagos, Achin, Indefatigable, Juan Fernandez, Patmos, St Helena, Crusoe’s. It is enthusiastically learned, initially quite bewildering to read, and in the end both an exhilarating and charming experience. It becomes a book in which exegesis overwhelms the text, yet still works as exegesis. We hop from island to island, each with its own engrossing tale to tell, each embedded with its own references, as the adventure grows ever deeper and deeper.

Desert Islands is really an anthology, and De La Mare was an expert and inventive anthologist. But it works nevertheless as a demonstration of the grand art of the endnote. It has those separate yet connected voices. The De La Mare of the notes is different (and rather more readable), though related, to the De La Mare of the ostensible main text. The notes serve their primary empirical function, even while they take their reader on intoxicating adventures of their own.

A work such as Desert Islands is a rare indulgence. Most endnotes know their place. But Desert Islands also serves as a metaphor for endnotes. They are islands on a map. The route between them traces the journey the author had to take to give us the overall picture. Individual islands invite us to stay longer, to put down a marker because this point on the map might be worth our exploring further some day. They remind us that the writing of every book (or essay) is an exploration, and to know how the journey was made as well as to read the story that the traveller has to tell, is a privilege all in itself.