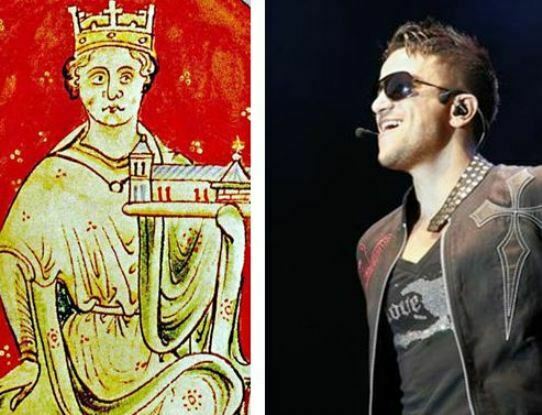 I live next door to a castle. This is quite a privilege, and though in summer time the leaves of a large tree hide the building from my window, in winter-time I enjoy castle views (as the estate agents like to say around here). Rochester Castle looks very fine from the outside, though it is a little disappointing on the inside, being entirely hollow, the wooden flooring and the rooms having crumbled away centuries ago. Built around 1127, the castle was strategically positioned with a wide view over the River Medway and the road to London. Its big moment in history was when King John laid siege to it in 1215, when it was under the control of some rebel barons (it was shortly after Magna Carta had been signed). The King undermined the southern tower (subsequently built round as opposed to the three other square corners, giving the castle its idiosyncratic appearance) and eventually won the siege after two months of fighting.

Eight hundred years on, the castle stands in a pleasant grounds enclosed within the walls. Normally the preserve of tourists and locals relaxing on benches, in mid-July it becomes the venue for pop concerts. The evening’s calm is pierced by the shrieks of the audience, a compere bellows into a microphone announcing the delights to come, a burst of drums sets the floorboards of the town a-trembling, and onto a temporary stage in the grounds comes some superannuated band whose last hits were a decade or more ago, now on their endless nostalgia tour. Tonight, as I write, it is Peter André.

I know little about Mr André, except that he was a singer of passing popularity some years ago who brought himself back into the public eye through a reality television series, and has maintained some celebrity ever since more through his happy character than his slender musical talent. To judge from the songs currently resounding across the town (because there is no escape from the concert, within at least a mile’s radius of the castle), he does not have much of an original repertoire and survives mostly by singing the popular hits of others. The audience love him anyway, to judge from the exuberant cheering. He puts on a good show.

I would rather that the evening were quiet, but pondering the matter there is something rather special about this juxtaposition of medieval castle and twenty-first century pop. What a wonderful world that through a leap of time but in the same geographical space can give us King John and Peter André. All the changed things that now mark us out for what we are – the language, the hair, the clothes, the amplification, the music, the crowds, the harnessing of electricity, the lighting, the staging, the cameras, the phones, the dancing, the light-heartedness, the food and drink, the healthiness of everyone, the empowerment of the young, the strength of women, the absence of violence, the welter of cultural assumptions.

King John and his kind would be bewildered by a Peter André concert, but that bewilderment would be accentuated by all the points he could recognise. These are still people; they still enjoy entertainment; they still eat, live and sleep much as people must always do; this is still the same terrain with the same castle. Look, there’s that round tower they built. Would have had the other three converted the same way if we’d had the money. Too many battles and never enough resources. Ah well.

I don’t know if you can call a Peter André concert ‘progress’ as such, but it is evidence of the extraordinary human capacity for change. For centuries, indeed millennia, humans changed very little. They had little conception of change, few opportunities to embrace it, and indeed were held back by hostile forces of government and religion from acting upon any urges to improve (because to change is to improve) their lot. Between King John and Peter André we have discovered a world of change. We exist for change. We know that ten years away, or less, the world will have moved on dramatically in terms of technology, opportunity, expectations and assumptions (though there is a strong chance that Peter André will still be singing the same songs).

As we all know from the news, there are those among us who want the world to stop changing, people of fixed certainties that they believe must be imposed violently. King John was such a person too. All those who lived in his time shared the same certainties about the human condition, faith, kingship and order, and the need to maintain the system through violence. Yet through his battles with the barons, and the signing of Magna Carta, he helped set in train those liberating processes which, the more people understood them, aroused a sense of independence and the possibility – and then the necessity – of change.

So it is that King John has given us Peter André. Maybe I’m not so grateful for the specific gift, but the extraordinary variousness of what people have been at different times and how they will continue to change is a marvellous thing to contemplate. It’s what makes us worth preserving.

Tomorrow night we have Billy Ocean…

2 thoughts on “Peter and John”