One of my favourite items popping up on my feed reader (thank you NetVibes) is the weekly News of the Week feature from the splendidly named The Pneumatic Rolling-Sphere Carrier Delusion blog. The blog is produced by Joe Thompson, a San Franciscan enthusiast for silent film and cable cars. The blog is mostly about passing on things of interest that have caught his eye, often from the digitised film journals to be found on the indispensable Media History Digital Library. One of these is ‘News of the Week’ or, to give it its full originally name ‘News of the Week as Shown in Films‘.

Throughout the 1910s the film trade journals of the time often had full page advertisements for newsreels which featured images from the various stories in that week’s reel. Newsreels were an exciting new idea, first introduced in France in 1908, in Britain in 1910 and in the USA in 1911. These weekly or bi-weekly collections on news stories weren’t called newsreels until around 1917, but instead went under various names such as animated gazettes, animated newspapers, news pictorials, topicals etc. They emulated the newspapers in their names (such as Pathé’s Animated Gazette, Gaumont Graphic, Eclair Journal) and in their content, and played their part in building up what were emerging as the standard components of a cinema programme to which audiences would return on a regular, reliable basis (main feature, second feature, cartoon, adverts, travel short and newsreel).

In these early years not every cinema took a newsreel, so it was necessary to advertise to the film trade the advantages of exhibiting these compelling news bulletins, and then making sure that they subscribed to your newsreel and not the manifestly inferior product on your rivals. So it was that weekly advertisements appeared with images from the newsreels, demonstrating their variety and freshness.

Most of these advertisements were produced on behalf on the individual newsreel companies. What Joe Thompson has uncovered and is publishing on a weekly basis, however, is a feature put together by a film journal itself, Motography, showing news stories from different newsreels – a newsreel compilation, in effect. Entitled ‘News of the Week as Shown in Films’, it highlights stories from Pathé News, Mutual Weekly, Hearst-Selig News Pictorial, Universal Animated Weekly and others. It seems to have run between between November 1914 and March 1916 at least, so naturally Joe Thompson is reproducing the reports 100 years on to the week (with a bit of background information to each story). 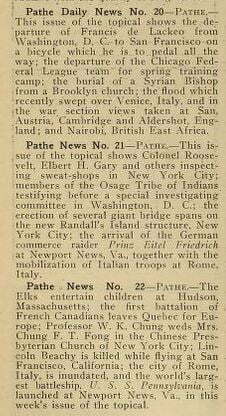 Many of these images are unique, and will be the only record of what was produced by these newsreels at this time. The survival rate of early American newsreels is appalling, and frequently not even the paperwork which could given you a listing of the contents of each issue survives, except in advertisements and compilation features such as ‘News of the Week as Shown in Films’. Moreover, there are many contents listing for the American newsreels produced by these journals without illustrations, such as the summaries of Pathé News releases for April 1915 shown left (from Motography, 3 April 1915). There is an an archival recovery project which could be undertaken by someone, to start producing content listing of early American newsreels, culled from the contemporary film journal records that are now available online. There is nothing in America (or anywhere else for that matter) to match the extensive documentation of a national newsreel output as has been done for the News on Screen database, managed by the British Universities Film & Video Council. This near-comprehensive record of the output of British newsreels and magazines from 1910 to 1983 was mostly compiled from company paper work (bi-weekly issue sheets) and some of the gaps that remain in its record could be filled from newsreel advertisements in British film journals, which can be found throughout the 1910s era, though sadly none are available online.

I made use of such listings (not illustrated, but nevertheless with good descriptions of the contents) when writing a book on the Topical Budget newsreel, many years ago now, and I know what can be done. So somebody needs to do it. It would recover the past, it would recover a medium, and it could be used to help identify those newsreels from the period that do survive in archives but whose exact dating remains a mystery until they can match to an authoritative paper record.

Meanwhile we have the weekly publication on ‘News on the Week as Shown on Films’, and if nothing else I encourage you to tap into the newsfeed and see the news of 100 years ago go by once more. (The feature also appears on another of Joe’s blogs, The Big V Riot Squad)