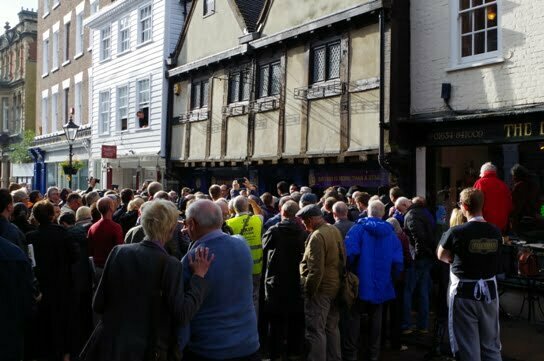 There is a quaint timber-framed building a couple of doors down from where I live in Rochester High Street. It was, until recently, the incongruous home of an alternative therapies centre entitled Rainbow Healing. It offered tarot card readings, Reiki workshops, holistic health solutions, and lots of candles. It was one of a number of eccentric shops in this eccentric town whose economic viability the passer-by might feel urged to question. Then, one day just a few weeks ago, Rainbow Healing was gone. Now its windows were plastered with yellow and purple posters urging the town to vote for the United Kingdom Independence Party, or Ukip. And all hell has broken loose.

It was a month ago that our local MP, Mark Reckless, resigned from the Conservative party and announced that he was going to join Ukip, an act which triggered a by-election in this constituency of Rochester and Strood. Since then Rochester has found itself at the centre of the nation’s news. We have had any number of TV crews prowling up and down, interviewing people in the street or seated at their pavement tables in the town’s many coffee shops. I had the rudest shock one Saturday morning when I opened my window and found Ukip’s Nigel Farage addressing a smallish crowd composed of 50% media and 50% late middle-aged men in shapeless clothes and with thinning hair who seem to form the core support of Mr Farage’s party. Every day on the news I see the shops and homes around where I live, and neighbours giving soundbites. The place looks so picturesque – the camera operators must love us (you can’t go wrong interviewing people with a castle in the background).

We have had MPs of every party visit the town – David Cameron instructed his cabinet each to visit the town at least once during the electioneering period: Cameron himself, Michael Gove, Ian Duncan Smith have been spotted, plus Labour’s Harriet Harman, Ed Miliband, and many more. One MP was quoted in the paper as saying that the trip was a rather more pleasant one than such tasks usually are, because Rochester has such nice restaurants and bookshops to browse. I haven’t yet run into a Tory minister skulking among the shelves of Baggins Book Bazaar, but I have become nervous of entering the place, for fear of running into George Osborne in the Modern History section. 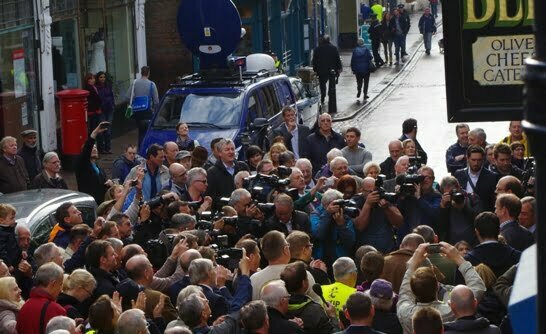 Nigel Farage is in there somewhere, if you need to look

The town has become a political circus. The Conservative party has likewise taken over a shop (a former toy models enterprise) at the other end of the High Street, and has commandeered a second, close to Ukip’s, with its windows all covered in blue posters. The Labour party has no such shop, and appears to have rather given up the fight. Others are exploiting the interest in the town for all its worth, and it is a challenge dodging all those trying to thrust leaflets into your hands as you head out for the weekly shop. There have been people trying to get us to sign up to an anti-Ukip petition, and assorted non-political groups have set up stall in public places at the weekends. I saw an anti-Islamophobia gentleman standing not so far away from an earnest duo from the Jehovah’s Witnesses, neither of whom seemed to be attracting much attention. But Rochester is the place to be.

It’s the place to be because the by-election is seen as an indicator of trends for the general election next year. Rochester has become a political weather vane of late. For years the place returned a Conservative MP, election after election with leaden reliability. Then in 1997 came the Labour landslide and Rochester went red – and stayed red for the next two parliaments, despite our MP being the maverick Bob Marshall-Andrews, a man much favoured by the media for always having something contrary to say about the government (he became a regular on Have I got News for You). At the 2010 general election it was clear the area had become one of those places which politicians identify as being key battlegrounds, because we could swing one way or another. The prime minister Gordon Brown turned up, startling the locals by ambushing them in Morrison’s. David Miliband was seen chatting to people seated outside the cafés a day or two after the election, when we got the Conservatives back again with Mark Reckless. He turned out to be as rebellious as his predecessor, generally to be relied upon to vote against the government on most issues. And then of course he left the party, and now Rochester may be turning to Ukip, if the polls are true. We really don’t know what we like here.

I’ve had a bird’s-eye view of all this because Mark Reckless’s office is a couple of doors away from my back door (hence the commandeering of the shop at the front of his office). I never saw the man til lately, nor sought him out, but since the by-election was announced there has been a steady stream of Ukip functionaries passing by my back step, carrying boxes of leaflets, speaking urgently into mobile phones, their eyes aglow, sensing blood.

It’s fun being in the middle of the silly circus, I must admit. It’s also deeply depressing. Just look what’s happened to the neighbourhood. Rochester is a place of change, not on account of immigration (which has had minimal impact on the town) but through expansion of housing. We have been part of the grand Thames Gateway plan to expand the housing stock for those unable to find homes in London, with new build popping up all along the riverside, and the impact on the High Street at weekends and on the commuter trains plain to see. Rochester is a vibrant mix of the reassuringly old and the dynamically new. The town reflects a nation in transition. But that transition is economic, not racial. Change leads people to feel a sense of pressure. They look for simple solutions, and just at the moment rather too many see an answer in the pernicious bigotry of Ukip.

I hope this is a passing thing, as by-election upsets so often turn out to be. I hope Ukip shrinks back to its tiny core support of those ill-tempered old men in their nasty jackets who can’t quite believe their luck in finding a party that seems to be legitimising racism. I hope the other people next door are made of nobler stuff. I hope Rainbow Healing returns.

4 thoughts on “The people next door”