I’m back from a few days in Paris, where (amongst other things) I visited two of the city’s cemeteries. I hadn’t planned to visit cemeteries on this short break, but the page on Père Lachaise in the city guide fell open in front of me and told me should go, and then Montparnasse cemetery was on the way home. That’s how things happen.

Père Lachaise is the more famous of the two, the larger and the more visually striking. It’s located to the west of Paris, near the Bastille, and is set on a hill which helps give it its distinctive character and the sense of adventure one feels in perambulating the area. It opened in 1804, and became the cemetery where the city’s celebrities chose to be interred after first the graves of Jean de La Fontaine and Molière and soon after the supposed remains of Héloïse and Abélard were moved there. Today visitors are greeted by a large plan at the entrance with a guide to the most notable names to locate, among them Honoré de Balzac, Sarah Bernhardt, Frédéric Chopin, Isadora Duncan, Georges Méliès, Jim Morrison, Edith Piaf, Marcel Proust, Gertrude Stein and Oscar Wilde.

It is a beautiful place in which they have chosen to rest. It is a garden cemetery, with leafy overhanging trees, and the great variety of graves and monuments, with accompanying statuary, making Père Lachaise a location where every prospect pleases. The cemetery is divided up into sections, intersected mini-streets, which feels like negotiating Paris’ arrondissements in miniature, adding to the sense of cemetery as a reflection of Paris itself, a city of the dead. The graves of the notables are then numbered within each section, and the visitors dutifully check out as many as they have the stamina to do so. Guides are available, who give their groups pocket histories of the subjects’ notable achievements – one guide that I saw appeared to be acting out a large part of one of Molière’s plays for the instruction of his captive audience. I duly went in search of the names that meant most to me, in particular names from the film world, wondering what it is that draws us to the resting places of the celebrated. It brings us closer to them, of course, but also makes us one with them. We admire them all the more for being contained with a small spot of earth with a stone above. We all end up this way. 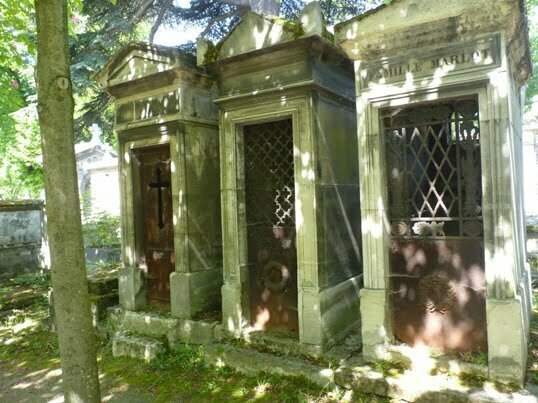 Of course not everyone in Paris ends up in Père Lachaise. It’s a final resting place for the select, and competition to be buried within its walls is intense. There are fresh graves there, often with photographs of the departed embedded in the stone, a curious modern taste that both shows intimacy and yet somehow belittles the subjects.

The older graves, monuments, vaults and sepulchres have the greater visual appeal, and what progressively fascinated me about the place was those who were not famous, whose graves were not well-attended, whose names did not appear on any tourist guide. Row after row of family sepulchres, shaped like stone police boxes, stand in testimony to city worthies, local politicians, financiers, landowners, lawyers, minor writers and artists long out of fashion, whose names no longer mean anything to anyone. Broken glass (many sepulchres have side windows with stained glass to let in holy light), rusted fretwork and dusty cobwebs mark the locations of the many who receive no visitors at all. Their family names stand proudly above such monuments – for often these are family vaults in which are interred generations under the same name – occasionally with weeping angels to look over them, mourning for those for whom no one mourns. 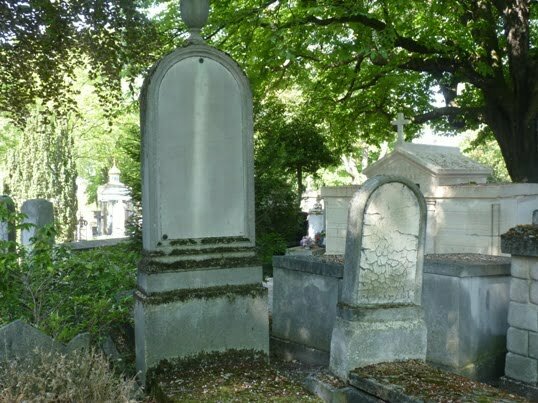 These are presumably those who paid for their plots in perpetuity (cheaper rates apply for those prepared to be buried for for 50, 30 or 10 years only, while there is a crematorium for more compact storage of the dead). A register somewhere must note that their wishes and their money be respected ad infinitum, and so thousands upon thousands of them stand in mute recognition of the fundamental lack of importance that the majority of us have for anyone beyond our immediate family and friends in the narrow time we spend on this earth. There they are, between Molière and Morrison, symbols of the humble limits of human ambition.

A few days later I visited Montparnasse cemetery. This is a plainer, flatter and smaller space, one that is split unequally in two by the Rue Émile Richard, though it has its share of the illustrious dead. Here you may greet the shades of Jean-Paul Sartre and Simone de Beauvoir, Charles Baudelaire, Samuel Beckett, Marguerite Duras, César Franck, Guy de Maupassant, May Ray, Eric Rohmer and Susan Sontag. I particularly valued finding the graves of Alfred Dreyfus, the chess player Alexander Alexhine and the documentary filmmaker Joris Ivens, but likewise the many names whose import is lost to time.

Both cemeteries are such quiet places in the midst of a busy city, performing guides notwithstanding, and I wondered what it is that makes us so quiet in cemeteries. Of course we are showing respect for the dead, but is it the dead who demand the quiet or us? The old English ballad ‘The Unquiet Grave’ sees the grave as the resting place of the dead who is disturbed by the mourning of the living. The quietness here lies in eternal rest.

The wind doth blow today, my love,
And a few small drops of rain;
I never had but one true-love,
In cold grave she was lain.

I’ll do as much for my true-love
As any young man may;
I’ll sit and mourn all at her grave
For a twelvemonth and a day.’

The twelvemonth and a day being up,
The dead began to speak:
‘Oh who sits weeping on my grave,
And will not let me sleep?’…

But we as visitors to cemeteries are now the ones who are quiet, who want there to be quietness. We recognise the respect due those who are gone. We do not mourn for them, we do not weep with the angels. Instead we recognise our bare, unaccommodated selves in those graves and sepulchres. Those neglected plots have our names upon them. We have no choice but to be quiet. We are as much the dead as they are.