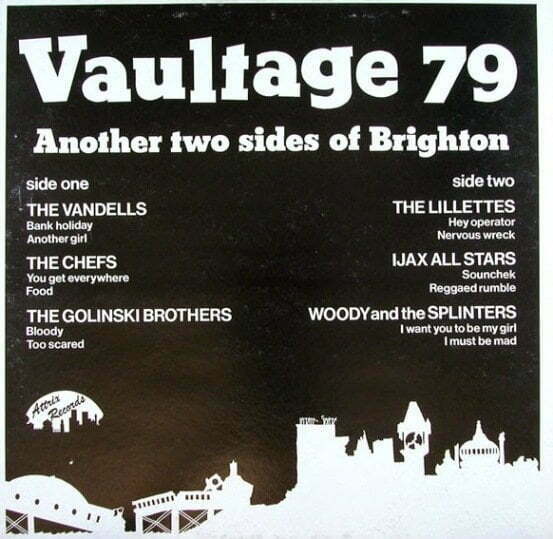 Has there ever been, in the entire history of popular music, a finer opening to a song lyric? As I trudged home from work through the snowy wastes of North Kent, the words came back to me – ye gods, from thirty-three years ago. They come from the first single by Brighton band The Golinski Brothers, a song entitled ‘Bloody’. A sing-a-long new wave number with ramshackle production put over with exuberant passion, it tells of the miseries of love and life with the irresistible pay-off line, “well, I suppose you’ve got to laugh … ha ha ha”. Of course it was a great favourite of John Peel’s, and it’s just the sort of record I would have bought around then, but a copy never made to the shops I obsessively frequented back in those days in Kent, and all I have is the song, playing ever more faintly in my head wherever snow reappears.

But then salvation comes in the form of YouTube. Among the true wonders of the great video archive that belongs to us all, is its music archive. While today every song has its accompanying video, back in 1978, 1979 – the golden year for popular song – 1980, so many bands issued one or two singles, released through backstreet labels with cheaply-printed covers, and left almost no other trace behind them. Many of the better-known, and even some of the middling-known punk and new wave songs of the era have made it onto compilation albums to appeal to nostalgists, but for the lower tier of songs that few bought because few could find them in the first place, the only place for them now is YouTube, as those of my generation dig out their 45s, use the record sleeve as illustration, and put them on the site out of sheer goodness. (There are other music sharing sites out there, of course, but YouTube is what I know).

So it is that I can find ‘Bloody’, and discover that it is every bit a wonderful as I recall – and indeed it comes with commentary from John Peel’s show, the great man declaring that people have been given OBEs for less and that he would like to listen to the song on a loop forever. (Happily it can also be found on Amazon as an MP3 download, I’ve now discovered)

Well this inspired me to seek out some other favourites from my well-spent youth. Of course the music that you hear when young is the greatest music ever, but in my case it is absolutely the truth. I was 18 in 1979, and the music then was so sensational, so creative, so new, it made you giddy. But while the Sex Pistols and the Clash had hit the headlines and frankly had had their day, and while the general public was discovering Siouxsie and the Banshees, the Buzzcocks, the Undertones and so on, there were hundreds of bands who just made the one or two records, ran out of ideas, never made so much as the alternative charts let alone the main ones, and slipped out of music history. You can trace them in the peerless International Discovery of the New Wave by B. George and Martha Defoe, or in handy databases such as Discogs or 45cat. So many incredible pop records that if released today would turn their creators into overnight sensations, yet then there were only few local concerts, and people like me leafing through the racks of 7″ records looking for that tune we heard on Peel last night, or intrigued by a striking record sleeve or witty single title.

So here are a few of my favourites from that golden age, which I think ended when the gloom of Joy Division changed the tastes of that generation for the worse. Few can be found anywhere else other than YouTube (so far as I know). Ah, memories.

The Quads: There Must be Thousands

The Quads came from Birmingham, released four perfect pop singles, reached no. 66 in the charts with this record, then were gone. I confess to having a tear or two come to my eyes when I played this again for the first time in three decades. Why did ‘Teenage Kicks’ become known to everyone, but ‘There Must be Thousands’ lies virtually forgotten? I can think of no other record that so powerfully expresses the delight in singing your heart out.

And then you turn the record over, and find that the B-side is every bit as good as the A-side. What were they doing putting this on the B-side? It’s just as great a pop song, with a unique guitar riff, irresistible drive, and a sly stop-start surprise towards the end. In 1981 the Quads went on to release the impassioned ‘Gotta Get a Job’ in support of The People’s March for Jobs (it may not be on YouTube, but how great to see that the Media Archive for Central England at least stores an ATV clip of the band rehearsing the song).

The Cravats came from Redditch, and somebody loves them enough to have created a website dedicated to them, with history, discography, pictures and audio clips. Indeed they still exist, intermittently, and there’s a clip of them playing their greatest number, ‘Precinct’, at the Shepherd’s Bush Empire in 2011. The original is punk as it was supposed to be, a rush of noise and anger, with war drumming, thudding bass, a just about discernible melody and the surprise element of urgent saxophone. Listen, then go and smash something up.

This sounded astonishing back in 1979; it sounds just as extraordinary now. There had been nothing like it music before – a menacing, slow bass line, phased guitar meandering the background, and the 14-year-old Honey Bane (who later had a brief solo career before becoming an actress) half-singing half-declaiming about society’s collapse. How curious that its account of people witnessing violence on a bus and doing nothing about it reads like Daily Mail leader…

Even those with encyclopaedic knowledge of the British new wave might struggle to recall Longport Buzz. They were big in Canterbury, and not much more. The drummer lived at the bottom of our road. Six songs made it to vinyl, including the 4-track EP ‘Canterbury Pop’, from which this comes. My copy has the tracklisting written in fountain pen ink – they clearly didn’t plan for major sales. Their songs were a mixture of the crpytically sardonic and pop pastiche, ‘Fun’ being an example of the latter. It’s not their best number, but it’s what YouTube has, and it’s the very embodiment of the song’s title.

OK, who wouldn’t have wanted to buy this record purely on the strength of the band’s name? This is just the sort of record you would be so happy come across when leafing through long racks of 7″ singles in search of some eye-catching oddity. Named after Coronation Street‘s legendary barmaid, the band came from Manchester, but little seems to be known about them. They made instrumentals based on cowboy film theme tunes, with twangy guitar, saxophone and spaced out chanting. But what did Julie Goodyear think of them?

This 1980 single has a better production than the other songs on show here. Did someone have plans for this female trio from London? It’s certainly an irresistibly chirpy dig at muscle culture. I particularly like that the copy played here comes with scratches. Nothing brings back the happy past quite so much as crackle on vinyl.

Metabolist were pure musique concrete, from their eye-catching single-colour-in-a-square record covers to their unrelenting industrial sound. They released a number of singles and one album, declined to have anything to do with the music business and the music business probably didn’t want to have anything to do with them anyway. ‘Chained’, from 1980, makes Cabaret Voltaire sound like kiddie pop. More information on this wilfully obscure band is here.

This dates from 1981, and its spare style is typical of sort of new wave records that followed the poppier sounds of 1979. But while a ‘post-punk’ bands like Delta 5, A Certain Ratio and The Gang of Four have a cult following, who remembers the Tarzan 5? Who were the Tarzan 5? They only ever released the one single, and I still deeply regret seeing a concert advertised for them when I was living in Manchester and not being able to get there. They disappeared, leaving just this pin-sharp comment on habitual sexism, with as catchy a chorus as you’ll find anywhere.

The Cybermen came from Accrington. I think I own their complete works – one EP, from which this song comes, and the glorious single ‘You’re to Blame’, both issued in 1978. The records are in flimsy paper sleeves with photocopied pictures of the band, the epitome of the punk ethos. Possibly recorded in a small shed, ‘Where’s the New Wave Now?’ laments the selling out of what was the most ethical and principled of music movements (indeed perhaps the only music movement that ever has been based on ethics and principles).

Thank you to all the bands, and to all those who have shared the songs on YouTube. Now someone should put together a compilation of uncollected new wave rarities and give the bands some royalties.