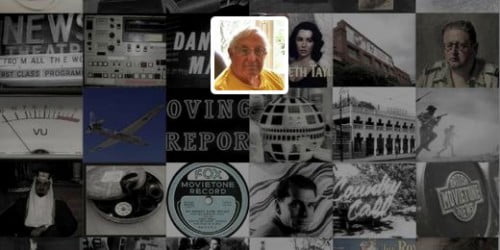 A recent article by Andrew O’Hagan in the London Review of Books has caused quite a stir. Written in the aftermatch of the Jimmy Savile scandal, it exposes a culture of child abuse from past decades perpetrated by various BBC personalities. One of these was the commentator and producer Lionel Gamlin. As a historian of newsreels, I was particularly taken aback by the revelations of his private life, because as well as working for the BBC he was a newsreel commentator, and I knew of him as a voice and no more than that. British Movietone News is not going to sound the same again.

However, what most interested me – and the reason for this post – was that O’Hagan cited Terence Gallacher as a source of information on Gamlin’s film career several times. Terence Gallacher is a really interesting person. He is a retired newsreel man, formerly general manager and foreign news editor at British Movietone News, as well as having spent time in television, with news agency UPITN, and manager of his own post-production company. Gallacher retired from the film business in 2000, then in 2010 took to the Web to start documenting his career.

He is making a superb job of it. His main outlet is the blog Terence Gallacher’s recollections of a career in film. This is a series of posts on Gallacher’s career, including assignments he went on, colleagues he remembers, personal memories, and potted histories of various aspects of film and television production. These are not being written chronologically; instead Gallacher ranges freely across the decades building up rich, multi-faceted account that ably suits the blog medium. If you want to pursue the posts chronologically, then he provide a timeline, as well as breaking up the posts into categories such as cameraman tales, film editing and sport. He also provides a helpful glossary of terms. It’s all informatively written in a clear, engaging style, with frequent posting and no sense of stretching the material or padding. There is no tittle-tattle (you’ll get nothing but the plain facts of Gamlin’s professional career) and no deep critique. It is simply an honest, helpful account of what he saw happen.

There are only a handful of British newsreel autobiographies out there. I’ve read them all and edited one of them. Particularly recommended for its rip-roaring (but also thoughtful) account of the rumbunctious career of a newsreel cameraman is Movietone cameraman Paul Wyand’s Useless if Delayed (1959). Another good read is Ronnie Noble’s Shoot First! (1950). The one I edited is John Turner’s thoughtful Filming History (2001), and there’s Ian Grant’s Cameramen at War (1980), Billy Jordan’s self-published A Cameraman for all Reasons (1999) plus the memoir of the most famous Movietone commentator, Leslie Mitchell Reporting (1981). They tell the tale of how news was made when news was found in the cinemas and was designed primarily to amuse, and like the medium they worked for they both entertain and inform. Other newsreel men have written unpublished memoirs or have been interviewed for about their career for the Imperial War Museum or the BECTU History Project series of interviews with film veterans.

But Gallacher has lived on into the Internet age, and has trumped them all by going online. The blog is his main outlet, but he has also produced a series of podcasts on his years at Movietone (also available via iTunes), a useful news-gathering site The Cutting Room on documentary film, television and newsreel web stories using Scoop It!, a Facebook account, a LinkedIn page, and a Twitter feed.

This is truly a life online – recorded, shared, active, a memoir shaped not by the writer losing himself in past times but by the media of today. Gallacher writes of a way of film production that is now lost, and part of his purpose is to document somewhere that which was once important, but his writing feels that it belongs to these times, and so matters.

There are many people out there using blogs and the like to record memoirs as well as current diaries. Most don’t reach many beyond a few family and friends, and I don’t suppose Gallagher’s writings are are read by a huge number, though word is spreading among those who know their film history. I’m just delighted to see a history responsibly researched and really well told. Newsreels brought the news to millions for seven decades, and their archives continue to inform our picture of the past by the footage that they provide to historical television programmes. We need to understand how those films were made fully to appreciate what the heritage of that film archive means. Those who were there, and who made those films happen, like Terence Gallacher, have much to tell us. Read, and we will understand all the more.

7 thoughts on “The newsreel man”