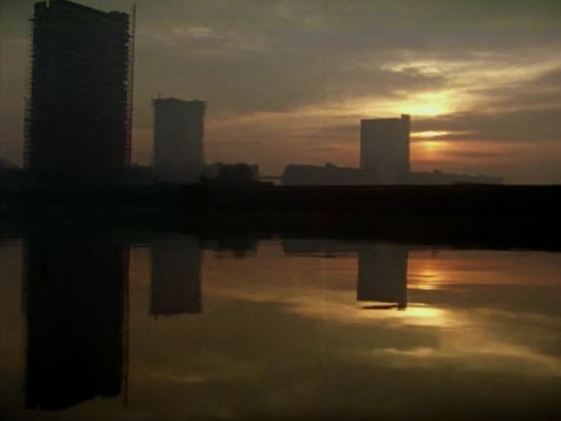 It is good to explore a river. One can proceed upstream, in search of a source whose precise location might never be determined. Or one can follow the river downstream until it widens out upon reaching the sea, the exact point on the map at which the one turns into the other being equally beyond determining. Of course, one may stroll along only part of a river, not caring for one’s direction at all, but that is not exploration. If you go on a quest, it must be for the elusive, not the obvious.

I have been walking parts of the Thames and Medway estuaries recently, following the rivers until they disappear into the North Sea. It was while walking along the former from the Thames Barrier down to Dartford that I was reminded of a film that made a huge impression on me when I first saw it, at the National Film Theatre, over thirty years ago. It was Thames Film, made by the artist filmmaker William Raban in 1987. 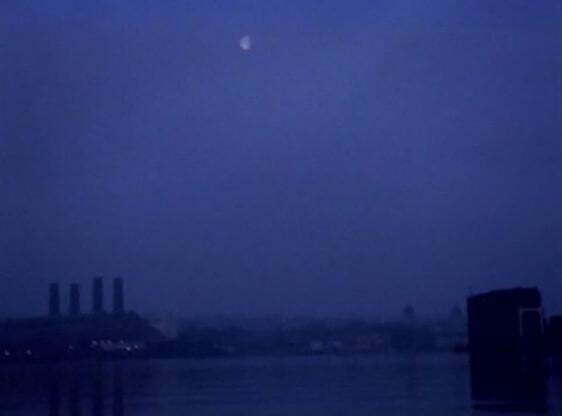 Thames Film is a meditative documentary that follows the Thames on a slow-moving boat from central London out to the North Sea, reflecting on history and time through a combination of narration and quotations (read by John Hurt), archival images and film clips. On first seeing it I was struck by the way it turned the journey of a river into a journey through time, drawing lessons from history as the film offered a successions of haunting images that found a particular poetry in the drab industrial reaches of the estuary, a stretch of water out of sight and out of mind. Raban himself says this about the film’s method and intentions:

By filming from the low freeboard of a small boat, the film attempts to capture the point of view of the river itself, tracing the 50 mile journey from the heart of London to the open sea. This contemporary view is set in an historical context through use of archive images and the words of the travel writer Thomas Pennant, who followed exactly the same route in 1787.

(Thomas Pennant was a Welsh naturalist, collector and traveller, who wrote about a journey taken from London to the Isle of Wight, via Dover.) 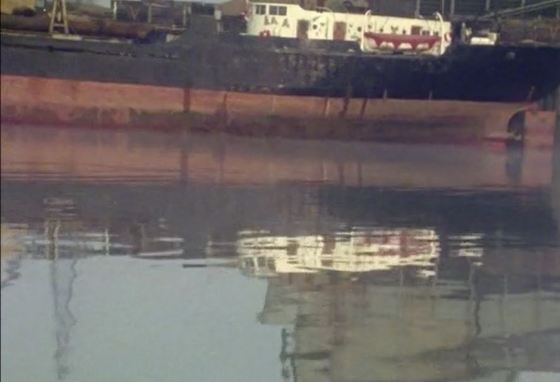 I watched Thames Film again recently and saw all that so impressed me the first time around. I know more of the history, and the geography, than I did thirty-two years ago, when the film’s reflections on that which had been forgotten – the wrecks, the prison hulks, the gibbets, the abandoned industries, all metaphors for a waning imperial power – felt like a revelation. There were some jarring breaks from the steady filmic progression, which cannot have bothered me first time around, as though the filmmaker had temporarily lost patience with the style that he had imposed upon himself. But overall the film’s slow passage down the river, with Hurt’s mournful delivery and the Whistler-like images of wharfs, jetties, refuse dumps, cranes and power stations, is as extraordinarily evocative as ever it was. 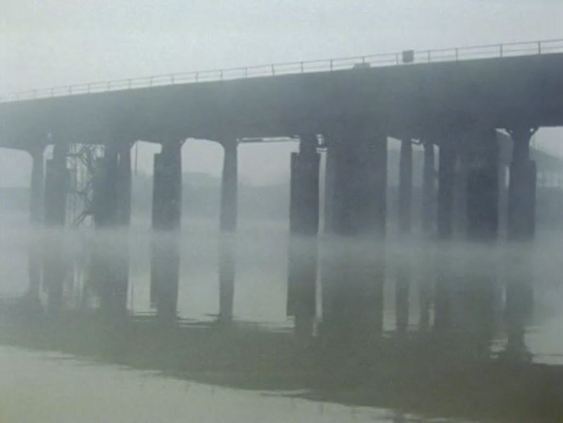 Yet there was something that bothered me about the film. It took a while to work out what was wrong. The film starts early in the morning, with the mists hanging thick upon the river as the City starts to rise. The sense is that we are on a single journey, travelling down the river as we travel down through time, an unfolding experience that must end with the fading evening light as we reach the sea. But the light kept changing. This journey down river was not in sequence, and if filmed at different times of the day it was presumably filmed over more than one boat journey. The reverie had been tarnished.

Worse still, the film was not entirely honest about the direction in which it was travelling. We passed by landmarks I recognised that could not be on the left or right-hand side of the estuary if we were progressing in the one direction out to sea. At first I was unsure of what was going on (one abandoned wharf can look much like another), but by the time we go to Canvey Island, near the end of the journey, it was obvious that the boat had sailed both up and downstream as the petrochemical site appeared on either side of the frame in different shot. The promised illusion had been broken. I wanted, I needed, Thames Film, to flow just the one way, from city to sea, like time. 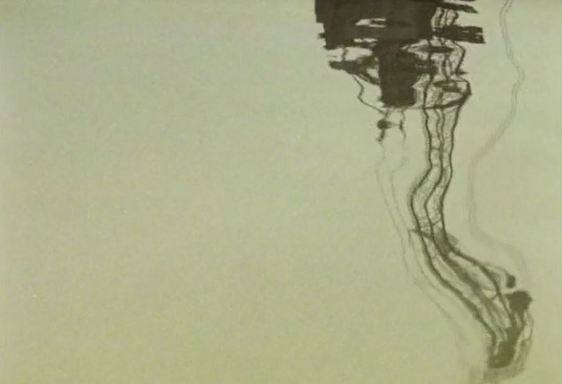 Has anyone written about rivers and film? There are some great river films in which the journey of the characters up or down stream becomes a journey of discovery profoundly analogous with film itself: Apocalypse Now, L’Atalante, Une Partie de Campagne, Deliverance, The African Queen, Aguirre, the Wrath of God, Fitzcarraldo, Louisiana Story, The River (Lorenz and Renoir). The river is not just an obstacle to be negotiated, but reflects the inescapability of time. It determines the direction and the pace at which the character must travel, whatever the effort they may make. They are in a story, but not of their own making.

Film, as a physical object, is (or was) so like a river. All narrative forms take us on a progression through time, in the story told and in the time we devote to absorbing that story, but only film showed us this in its literal physical form; that is, as a long strip of plastic bearing a succession of images. Yes, there are panoramas (but they present time frozen), friezes (have you tried following the story on Trajan’s Column?), cartoon strips (too brief) and graphic novels (they are extended sequences of images but have been turned into book form). Only film gave us an extended journey through time, like a river, that we could see unspooling before our eyes. 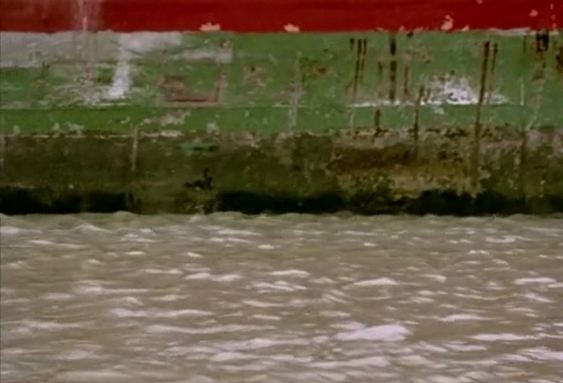 Of course, it is necessary to use the past tense. In all but exceptional circumstances, film is shown digitally, while its physical carriers are tape, disc or solid state. What, then, has been lost? It’s something to do with a loss of uniqueness, of film as a recognisable entity as opposed to just another digital configuration of ones and zeroes. It’s something to do with a loss of the sense of our relationship to narrative and unfolding time – a reel of film tells us more about the precious quality of time than do the duration figures on a DVD.

It’s also something to do with that river quality, in which the reel of film (a feature film came in several reels, but let’s imagine them assembled together on a platter) shows us a source, a journey, and an ending. Though the story those reels hold may have its variations in tempo, its recapitulations and complications, underpinning such surface eddies is the steady flow, twenty-four frames a second (the standard film speed for sound film): unvarying, proceeding unstoppably, until the river reaches its conclusion, and time runs out. 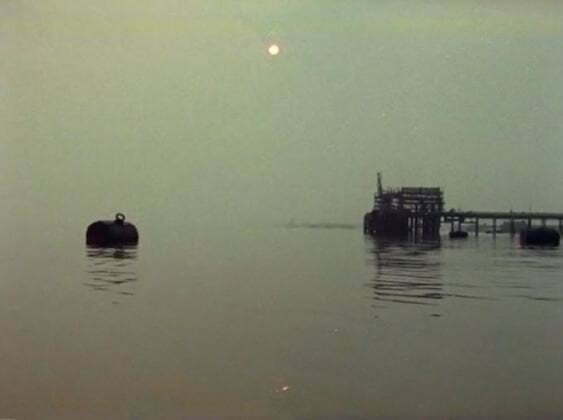 So film doesn’t have to have a river as its subject to be like a river, but it does bring the metaphor into clear focus. The frustration that I feel with Thames Film, on seeing it anew, is that it comes so close to an ideal, only to compromise. That ideal is pure film of some kind, which does not deviate or row back, but takes us on a single journey, in a single direction, surrendering to the only direction in which time and the river ultimately can take us.

By that measure, the only pure films are single-shot films – those early actualities of the Lumière brothers that capture without interruption an action in 17 metres of film, the ‘animated photograph’, as they were known at the time. To cut is to be creative, but it also cheats time. 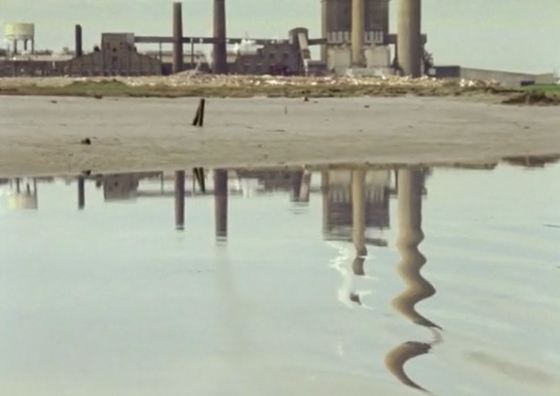 I wanted Thames Film to be a single journey. I wanted it to be true to the river, from (city) source to sea, from early dawn to evening. Though it fails to achieve this without some dissimulation, it is nevertheless a singularly thoughtful and beautiful film. The thought lies in its psychogeographical approach to the river and its submerged history. The beauty lies not only in the haunting images Raban conjures out of a part of the country dismissed by most as ugly (if they are aware of it at all), but in the hypnotic pace, the camera sailing up to each forgotten landmark with a steady, questing spirit, coming face to face with the elusive.

Peter Ackroyd has written of the visionary qualities of Thames Film:

There are moments of light and colour that lift the spirit with exaltation. There are giant shapes and structure that fill the mind with awe. There are passages of mist and turbulence that recall the primaeval Thames of swamps and marshes. The multifold images of the river run through this film like the currents and tides of the water itself. It is a film, in every sense, of great fluency.

This pinpoints the film’s riverlike qualities, and by extension the riverlike nature of film itself. It rests on that singularly resonant word ‘fluency’. In every sense, film goes with the flow. 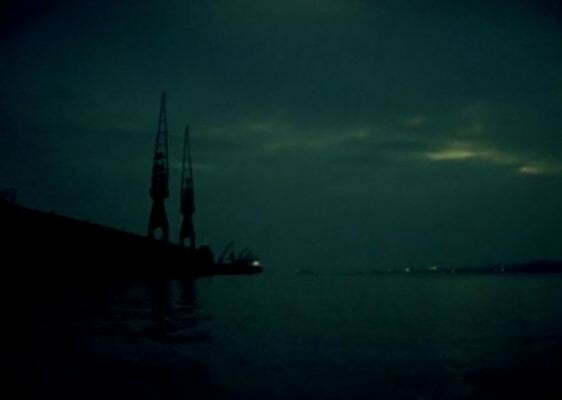 All of the images in this post are frame stills taken from Thames Film, reproduced in sequential order

2 thoughts on “Film is a river”