Earlier this year I wrote a blog post about the director Peter Jackson’s plans to produce documentary featuring colourised footage from the First World War. Though nothing was available of the film bar a single still, I was alarmed by the rationale behind it. The argument seemed to be that digital technology now allowed us to add colour in a way that made the past more meaningful, increasing a sense of emotional connection. I argued that this was false technically and philosophically. Technically, because monochrome film of the First World War was made on orthochromatic stock, which was not sensitive to the full colour spectrum, so any digital colour derivative would be untrue to nature. Pretty, but untrue. Philosophically, because it would be better to teach those to whom the monochrome past might seem alienating to see more in it, and through the effort to gain understanding. Colourisation was a denial of history, not a new route into it.

I was invited by the BFI to turn the post into an article for Sight and Sound magazine. This generated an interesting correspondence. Some disagreed with the stance, welcoming the chance for a more meaningful connection to the past, and dismissing my concerns as elitism. Others shared the alarm, one asking if the horrors of the concentration camp films would need colourising before the present generation could be moved by them. 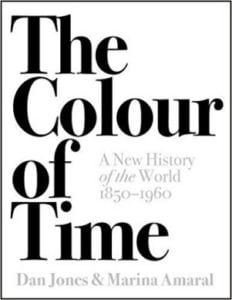 I thought of this last argument when looking at a book just published, Dan Jones and Marina Amaral’s The Colour of Time: A New History of the World 1850-1960. Dan Jones is a popular historian, expert in the medieval period, with a fine narrative style (though with little opportunity to exercise it here). Marina Amaral is a Brazilian artist who specialises in adding colour – through a mixture of historical research and artistic judgment – to black-and-white photographs. She is big on Instagram, where her colourisations of historical images, often images previously burned into public consciousness in their monochrome form, have gained cult status.

The book reproduces some 200 photographs from the Great Exhibition to the Space Race, each of them a colourised version of a black-and-white original. There is the First World War in colour, General Custer, Mao Zedong, Queen Victoria’s Diamond Jubilee, the US Civil War, the discovery of Tutankhamun’s tomb, and the Titanic. And, yes, there is the Holocaust – inmates of Buchenwald, now in full colour, in all their new meaningfulness.

In their introduction the authors tell us the rationale behind the book’s production:

The world has always been as vivid, immediate, colourful and ‘real’ as it seems to us today. Yet vivid and colourful is seldom the way we see the past now. Photography … was for its first century a medium that operated almost exclusively in black and white. The view behind us is partial and faded …. This book is an attempt to restore brilliance to a desaturated world.

This is not unreasonable as an argument. They are trying to show that the past was not some remote monochromatic place, disconnected from ourselves (there has been many a child, and probably a few adults too, who have imagined that those in the past literally lived in a black-and-white world). They are want to surprise and entrance us with colour, welcoming us back into a past that they have helped make familiar.

There is also plenty that is dubious about this as argument, of course. Colour photography is over a century old itself, and many of the images that feature in the book have colour equivalents that could have been picked instead. There was colour photography in the First World War, there was colour film of the concentration camps (shot by Hollywood director George Stevens). Part of the undoubted charm of The Colour of Time is that its colour images do not much look like the colour images of today but rather of the colour processes of the past, notably the haunting, grainy Autochrome colour process invented by the Lumière brothers (and used during the First World War) and the Photochrom system used for postcards at the turn of the century, which applied artificial yet enticing colour to black-and-white images in much the same spirit as Amaral.

So, though I find the book overall to be vulgar, gimmicky, and the antithesis of history, it does have its arresting moments. Seeing the Wright brothers’ Flyer take off in 1903 against a bright blue, hopeful sky, feels emotionally right. Seeing Hitler look down of line of troops on ordinary green grassland mocks the pretentious where the black-and-white accentuated it. The awe-inspiring Egyptian figures at the Great Exhibition are powerfully compelling in colour. None of it is reality, but it makes the dreams feel real, occasionally.

But so much is wrong. The majority of the images come from the Getty collection, but none is identified. Nothing is said about why the photograph was taken, under what conditions, or by whom. Some images famed for their black-and-white composition, such as Dorothea Lange’s photograph of a Great Depression mother, or Herbert Ponting’s ice cave image from the Scott polar expedition, are grossly vulgarised. Nothing in Jones’s commentaries on each image addresses the issues behind the colourisation, or addresses the changes wrought by colourisation (indeed the colour itself is seldom discussed). This is the new reality, is the implied argument.

The day will come when monochrome is no more. Of course the photographs will exist in archives, and as the preserve of specialists. But in the minds of the majority, our black-and-white past must go. Peter Jackson knows this. The producers of a historical television programme featuring a friend of mine, who told me how they were nervous that the black-and-white clips at the start of his edit would make audiences switch off, know this. Broadcasters know this (as black-and-white films disappear from all but specialist channels). Head of Zeus, the publisher of The Colour of Time, knows this. Instagram knows this. The public knows it.

This way of thinking must lead to diminished understanding. If we cannot see the past through the artefacts of its times, then we cannot properly recognise it. It may look superficially attractive, but that has nothing to do with history. If we are to learn anything from images at all, they must be understood in their contexts, and seen as they were originally seen. Monochrome was never partial, it had its own brilliance, and it was honest. This alternative is not.