Once upon a time wars, like stories, had a beginning, a middle and an end. Two sides lined up over an issue, or set of issues – land, honour, race, faith – and fought. In fighting they abided by a common set of rules, or seemed to. One side won, and gained the objective. The other side lost, and so conceded. The war was given a name and a date, and so we all went on to the next war, and the next. It was like watching football.

War is no longer like that. Wars – in Syria, Afghanistan, Ukraine – seem to drag on endlessly, never reaching a point of victory because victory, in the traditional sense, is no longer the point. The real victory lies elsewhere, in management of the story. And that is because most wars are now information wars, contests between conflicting narratives played out through social media, in which we are not only spectators but participants. 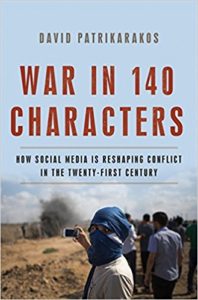 This is broadly the theme of the excellent new book I’ve just finished reading, David Patrikarakos’s War in 140 Characters: How Social Media is Reshaping Conflict in the Twenty-First Century. Patrikarakos’s thesis is that social media, in dismantling traditional hierarchies of information and making anyone of us interconnected with everyone else, has “irretrievably changed the way that wars are fought, reported on, and consumed”. The Clausewitzian model for how war is conducted is now out-of-date. As he writes:

The twentieth-century nation-state traditionally held primacy in two areas, from which it derived much of its power: its near monopoly on the use of force, and its dominant control of information flows. Web 2.0 [enabling the creation and exchange of user-generated content] has endowed people with two crucial abilities to disrupt this power: first, they can actively produce content on social media platforms with almost no barriers to entry, and second, through the use of these forums they can form transnational networks. Both of these abilities enable them to fill roles traditionally occupied by nation-states and to shape events around the globe.

His book explores this post-modern state of things, presenting studies of individuals (or characters) who through social media have become new participants in war. They include Farah Baker, a sixteen-year-old Palestinian, whose on-the-spot tweets about the bombardment of Gaza gained worldwide attention; Aliza Landes, member of the Israeli Defence Force trying to bring a traditional military outfit into the social media age while always fighting a losing battle; Anna Sandalova, a Ukrainian activist using the power of Facebook to provide support for the military that the government itself was failing to achieve; Vitaly Bespalov, employee of a St Petersburg troll factory who pumped out fake news through plausible-looking websites that promoted the Russian view of the world over the Ukrainian; and ‘Sophie Kasiki’ (not her real name), recruited to join the Islamic State through its all-encompassing control of message and medium.

Most interesting, to me, of the subjects chosen for study is Eliot Higgins. If you were to ask me who is the greatest journalist of our times, his is the name I would give you. You won’t find his work in any traditional newspaper or news broadcast; you could argue that what he has done is not really journalism at all (Patrikarakos, as a journalist himself, rather struggles to define it), though I feel that it is profoundly so. In 2011 Higgins was an unemployed, former finance worker, with an obsessive personality and a passion for playing World of Warcraft, when he became intrigued by the use of videos in the Libyan civil war, where both sides claimed that their videos documented their capture of the city of Brega. Through meticulous analysis of the videos and satellite imagery on Google Maps, Higgins was able to demonstrate that both sides were lying. The truth was out there, somewhere, and it was open source.

Higgins set up a blog for further such analyses, calling it and himself Brown Moses (after a Frank Zappa song). He posted more analyses and debunkings of claims made by sides in military conflicts, using openly available tools backed up with intensive research into subjects such as weaponry. Almost no one else was doing this sort of work, and journalists and government agencies started to to take note. He reached apotheosis and fame with his investigation into the downing the shooting down of the MH17 plane over Ukraine, in which he worked with a team of like-minded obsessives through a new website, Bellingcat.

Patrikarakos’s account of how the evidence behind the downing of MH17 was put together through patient video analysis, mapping software, geolocation, photographs, calculations over the position of the sun, military hardware knowledge and international effort co-ordinated from a bedroom in Leicester is absolutely gripping. Needless to say Russia fought back with its own narratives and ‘evidence’, once the story was out that the missile used could be proven to have been fired from inside Russian territory. But Higgins has gone on to train others in the skills he has developed, briefing governments, war studies departments and media organisations, and having a profound influence on intelligence gathering in wartime. Higgins’s story is so uplifting because it shows such belief, that truth can be found in an online environment which to many seems irredeemibly post-truth, where anything can be argued for, and believed. That’s what journalism must be, today.

War in 140 Characters (how the publishers must have cursed their luck when the book when into print just at the point when Twitter decided to up its limit to 280 characters) shows how wars are now wars over information, and how this has seen the recruitment of individuals, from outside understood military structures, as new kinds of participants in these wars. However, the causes over which a post-modern war may be played out seem defiantly traditional. The issues are still land, honour, race, faith. Twenty-first century conflict is built on inherited narratives: Israel and Palestine, Russia and Ukraine, Sunni and Shia Islam. The methods are changing, and some of the participants are new, but the enmities lie deep. Our virtual world as yet has no deep roots, no post-national allegiances that might supplant the old. Future wars will continue to occupy this new battlefield but whether this will in turn change the reasons for war remains to be seen.