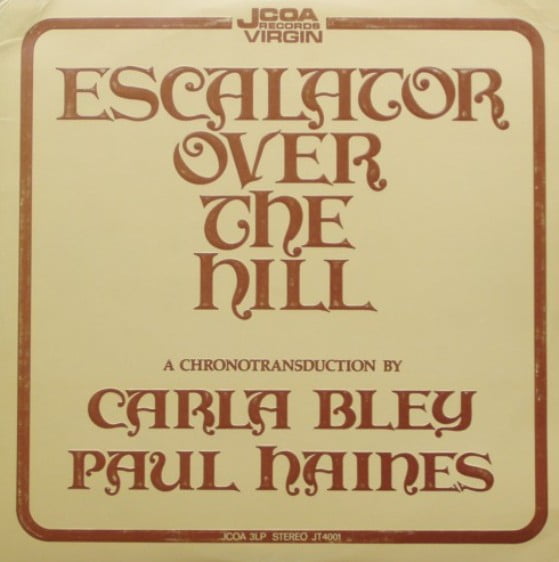 The first jazz record I ever bought was a triple-LP avant garde jazz opera. I was seventeen years old, and pretentious, but there were good things to be found among the shelves of second-hand discs handed in by impecunious hippies to Rock Bottom, Whitstable’s peerless record shop, in the late 1970s. It was in that tiny shop that I picked up many an intriguing oddity at a price just about within the range of my Saturday job wage. And so it was that I bought Escalator Over the Hill, by Carla Bley, Paul Haines and the Jazz Composer’s Orchestra. It looked interesting.

It was thrilling and baffling. It was a wild mix of big band and small ensemble jazz, rock, Indian music, Kurt Weill-style opera, choral music, synthesizer explorations and the unclassifiable – a compendium of everywhere the music mind set free might go. There was no story to this opera – or ‘chronotransduction’ as its composers described it – as such. There was a setting, of a run-down hotel, probably in India, to which a disparate collection of characters had gathered, some of whose names recurred enough to give them some sense of a personality – Jack, David, Ginger – though because nothing could be straightforward in this avant garde world, there were two Gingers, one from the West and one in India. But it was far too free-form to admit of anything that might have a middle, a meaning, or an end.

Escalator Over the Hill was a collaboration between the jazz composer Carla Bley and poet Paul Haines, which began in 1967 and only reached fruition in 1971. As Bley writes in her fascinating 1972 account of the work’s composition, it began out of some poems sent to her by Haines, which matched music ideas that she was toying with. Gradually the idea of an opera, of sorts, emerged, composed over three years during most of which Haines was based in India and Bley in the USA. Its inspiration was not just Haines’ Dada-esque ramblings, but the opening up of possibilities revealed by Sgt Pepper and the jazz-rock inventions of Frank Zappa. It was absolutely a product of its freewheeling age, mixing musical and lyrical experimentation, Eastern mysticism and an unfettered idealism.

Bley’s notes make it clear that this was no naive adventure, but instead one underpinned by a sharp professionalism and a refusal to compromise. The money required to pull together over thirty musicians and a cast of twenty or more was pulled together through a combination of loans, favours and pleadings, though it is typical of its period that the $15,000 that kicked the project off came from a couple who were selling off all of their worldly goods before leaving for India.

The names involved are amazing, particularly if you know the jazz experimentalists of that period. Aside from Bley herself, the ensemble includes Gato Barbieri, Don Cherry, Charlie Haden, John McLaughlin, Paul Motian, Roswell Rudd and Michael Mantler. The singers include Jack Bruce (who always had a touch of the operatic for his vocals with Cream), Paul Jones (of Manfred Mann fame), Viva (of Andy Warhol fame) and, astonishingly, Linda Ronstadt, as one of the two Gingers. Her clear, countryfied voice is heard to startling effect on ‘Why’, one of the set’s highlights.

As said, I was thrilled and baffled. It was a bit too much to take in, in its two-hour entirety. Some of it was inspired, some of it rambled. There were numbers of tremendous power, notably the opening ‘Hotel Overture‘, with its skilful exposition of themes and its sublime uplifting final notes, the measured melodrama of ‘Smalltown Agonist‘, the swirling, inventive ‘Why‘, the mournful ‘Holiday at Risk‘ interspersed with touches of madness, the intriguing experimentation of ‘A.I.R. (All India Radio)’, the epic ‘Rawalpindi Blues‘, and the bonkers, anything goes finale of ‘… And It’s Again‘ which ended – or rather never ended – with a locked groove effect, so that the final hummed note went on playing forever, or until your record player gave out.

I listened to it a few times, and returned to it from time to time after that. It sat on the shelves for a good many years until I decided to dispose of the greater part of my vinyl collection a few years ago and let Oxfam be the beneficiaries. Then, just recently, the ECM jazz label, they of the clear sound, stylishly austere album covers and achingly cool roster of artists, decided at long last to make their library available on Spotify (and other platforms). Escalator Over the Hill was originally released by JCOA Records, but subsequently handled by ECM, along with much else among Carla Bley’s later, generally brilliant, output.

And the record is as just as it ever was – outstanding mostly, mad occasionally, dull never. It is a tremendous work of invention, in which each individual element works well on its own, yet fits in well with all the others. I’m delighted to find how much I remember, particularly from the first half of the work, which was my favourite at the time. What is particularly remarkable about it is its cohesiveness. Despite its cross-continent compositional genesis and protracted recording history, frequently held up by money shortages and limited availability of artists, Escalator Over the Hill sounds fully realised, unspoiled by compromise yet with every piece of its puzzle fitting. It isn’t an opera at all – there is no dramatic narrative that could be staged. What is sung describes a scenario instead of performing it. It is a third person opera, if you will, though with multiple third persons. Haines’ lyrics make only fleeting sense, but they prove to be entirely singable. They are as much jazz in themselves as is the music. They do limit the work’s greatness, because they are about nothing, but without their free-form suggestiveness Bley would never have been able to construct the music as she did.

How good to find the past sounding as exhilarating as when it first challenged you. Escalator Over the Hill still sounds like nothing else, and always will. It has its absurdities, but then so does Sgt Pepper. Absolutely of its time, it has ended up timeless. And that is what art is.

4 thoughts on “Escalator over the hill”