This new experience came about when I had to go to the dentist. I sat back in the chair, stared up at the ceiling while waiting for them to do their worst, and there instead of the familiar white ceiling with cracks in the plaster on which I would formerly concentrate grimly, was a video screen. Around three feet by two feet, it beamed relaxing videos at me during the ordeal, and though the view was somewhat obscured by the dentist’s lamp, so that I could only see the fringes of the numbing visions, I found the experience fascinating.

The videos were soundless compilations of swooping shots of scenic grandeur from around the world. Desert sands followed polar wastes followed tumbling waterfalls followed time-lapse scudding clouds. Like a National Geographic programme on an endless loop, the video whirled you around the globe with pristine shots of spaces empty of anything except grandeur. Human beings were absent from such spaces, though other shots featured New York at night, and I saw a marching band and a peculiar sequence (the dentist’s lamp didn’t help comprehension) in which an Indian man reading a book was intercut with a helicopter shot of Antarctica. At times the juxtapositions were quite bizarre, like I was Warren Beatty in that scene from The Parallax View and being bombarded by images into passive acceptance. It was the world’s greatest hits, except that it was nothing like a world in which anything actually lives. 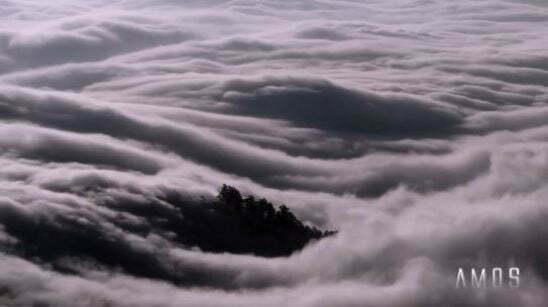 I was fascinated by the blandness of the imagery, and pondered how some motion pictures can project nothing – devoid of meaning, yet not devoid of purpose. It’s the polar opposite of all those earnest pioneers who believed that film was the most powerful medium, the medium that could rally people to a cause, that could help change the world. When the revolutions have failed, what we get is ambient TV.

The videos came courtesy of Amos TV, a company who specialise in putting together compilations of such stpck footage (much of it indeed from National Geographic and the Discovery channels), overlaying it with easy-listening classical music, and selling the packages to suit the ‘ambient needs’ of institutions, hospitality suites and health centres. How many dentists have taken up the offer and have gone the next step by putting screens on the ceiling, I don’t know, but but a quick web search suggests that it’s growing trend which started first in America (cartoon films for children seem more common than the unearthly beauties of nature for the adults).

Have ceiling videos extended beyond dentists’ surgeries? Obviously planetariums have featured video imagery that you have to look up to see. But how about bedroom ceiling videos? Or playgroups? Or sun-tanning studios (if you can see through those dark glasses)? Or hospital wards? And has anyone come up with floor videos as yet? Could be a bit problematic taking care of the screen, but behind a piece of perspex it should be OK. But for what purpose? I hope and expect to see soon.

Truly there is no space left where a screen might not go.

2 thoughts on “Look up and relax”