The birth of the popular science film – Francis Martin Duncan appears as the scientist in Cheese Mites, the notorious film he made for Charles Urban in 1903. The full film was only recently discovered by Oliver Gaycken (lurking on YouTube under a made-up title)

Two books are to be published shortly which cover the great work undertaken by some of those who worked for non-fiction film producer Charles Urban, about whom I’ve been known to say a thing of two before now. Both come warmly recommended. 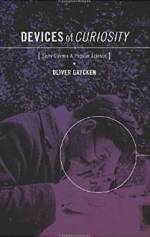 The first is Oliver Gaycken’s Devices of Curiosity: Early Cinema and Popular Science, published by Oxford University Press in June (in hardback, paperback and Kindle editions). This is a study of the popular science film from its origins in 1903 through to the mid-teens. This was an extraordinarily productive period, in which a tradition of magic lantern lectures was superseded by the new medium of cinema, which in its formative years embraced every kind of screen entertainment as it tried to work out what best captured the audience’s imagination. Films showing scientific and mechanical processes, natural history and discovery were widely popular, and talented filmmakers such as Urban’s employees Francis Martin Duncan (particularly championed by Gaycken) and Percy Smith ingeniously combined good science with good entertainment, exemplifying Urban’s motto ‘To amuse and entertain is good, to do both and instruct is better’. American academic Oliver Gaycken has become the leading authority in this branch of cinema: very good on the details of the films, on their cultural contexts, and on the personalities that created them.

The Four Seasons (1921), made by Raymond T. Ditmars for Charles Urban (the surviving copy was found in the Netherlands, hence the Dutch intertitles) 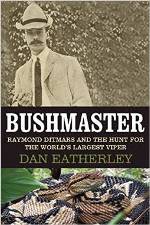 The second is Dan Etherley’s Bushmaster: Raymond Ditmars and the Hunt for the World’s Largest Viper, also published in June, by Arcade Publishing. Its subject is Raymond T. Ditmars, less well known in silent film studies, but a celebrated figure in his time and an important one in understanding how we have been turning nature into screen entertainment over the past hundred years or so. Ditmars (1876-1942) was curator of reptiles at New York’s Bronx Zoo who successfully popularised natural history for American audiences through film. With Urban he made the pioneering documentary features The Four Seasons (1921, recently made available online) and the mildly controversial Evolution (1925). It is appropriate that this forerunner of the work of David Attenborough should be written about by a naturalist and producer who worked on Life of Mammals and Planet Earth. Bushmaster combines biography with natural history by documenting the life of Ditmars and following in his footsteps in the South American jungle in search of the world’s largest viper.

It’s great to see how Urban’s talented acolytes are getting discovered and written about. Percy Smith has been the subject of a BBC4 documentary, Walter Booth’s films featured prominently in the recent BFI Science Fiction film season, Edward Turner’s experiments with colour cinematography went viral a couple of years ago, and Cecil Hepworth (one of Urban’s first employees but best-known as a producer of fiction films) will be the subject of a biographical study by Simon Brown. And there are other possible projects in the offing…

Do look out for both titles, and tell your friends.