I paid a rare visit to the BFI Southbank the other day to see a programme of films entitled ‘The Birth of British Sci-Fi’, part of its Sci-Fi: Days of Fear and Wonder season. The six films on show ranged from 1897, with G.A. Smith’s The X-Rays to A Message from Mars (1913), the first British science fiction feature film. Long believed lost, this was my main reason for going. The film was an adaptation of a popular play by Richard Ganthony, a sort of Christmas Carol-type story in which a messenger from Mars converts a miserable man, Horace Parker, into a good-hearted person. It starred the renowned comic stage actor Charles Hawtrey as Parker, and was essentially a wordless play, plodding in style and performance, with only Chrissie Bell (as Parker’s fiancée) looking like someone who belonged in front of a camera.

But what made the show more than worthwhile was a film shown earlier, The Automatic Motorist (1911), directed by Walter Booth and produced by Charles Urban’s Kineto company. This was an absolute delight. An automaton (robots wouldn’t become true robots until the word was coined in the 1920s) gets in a car and drives a newly-wed couple into space, despite the efforts of a policeman hanging on to the back of the vehicle (and a dog hanging on to the back of him). They drive over the dome of St Paul’s cathedral, then into space, passing the Moon before landing on the rings of Saturn. They they crash into Saturn, where the policeman is captured by a group of Saturnian children wielding spears. The robots drives on, taking his charges back to earth and under the sea, before they finally fall to the ground when a man with a gun takes pot shots at them.

The film is a remake of sorts of Booth’s The ? Motorist, made for Robert Paul in 1906, which features an automotive trip to Saturn and a crash back down to Earth. The later film is far more sophisticated in technique, detail and wit. It has those little details – the dog determinedly attached to the policeman’s behind, the hole made in Saturn, the look of wonder on the couple’s faces at the scenes underwater – which turn trick into fantasy. It is a dream of film; played for laughs, but with a governing logic rather than simply a sequence of unconnected absurdities. A live-action cartoon, maybe.

Walter Booth is one of the undersung masters of early film. Someone should really champion him and undertake the research into him that his work merits. France has Georges Méliès, Spain has Segundo de Chomón, France has Emile Cohl, each much acclaimed masters of the early fantasy film. Fewer of Booth’s films survive than theirs, but he is no less worthy of investigation. 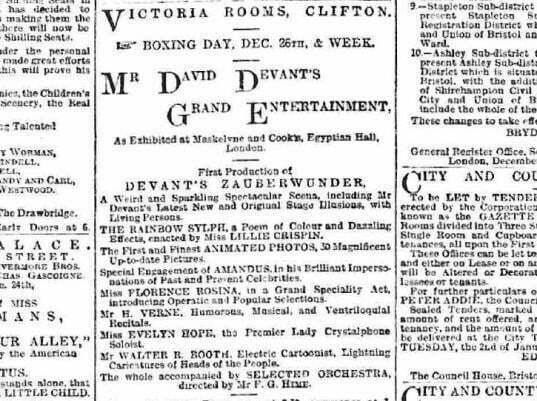 Advertisement for David Devant’s Zauberwunder, from Bristol newspaper The Western Daily Press, 24 December 1898, in which Booth is credited as being an ‘electric cartoonist’

Not enough is known about him, but he was born Walter Robert Booth in Worcester on 12 July 1896. His father, Robert Booth, was a china painter, and Walter was apprenticed as painter to the Royal Worcester Porcelain factory, where he is believed to have worked until 1890. He then pursued a career in entertainment, as a lightning cartoonist, ventriloquist and magician, joining the company of renowned magician David Devant, with which he toured the UK over 1898-1900. Devant’s shows featured films produced by Robert Paul, and Booth began directing short trick films for Paul, often on the theme of magic (with himself as the magician), titles such as Upside Down; or, the Human Flies (1899) (in which the actors dance around on the ceiling), Chinese Magic (1900), The Haunted Curiosity Shop (1901), The Waif and the Wizard (1901), The Magic Sword (1901) (a particularly inventive visual treat) and The Devil in the Studio (1901), which showed off his cartooning skills.

Scrooge; or, Marley’s Ghost (1901), an early trick film based on Charles Dickens’ A Christmas Carol, made by Booth for Robert Paul

There were many magicians who incorporated films into their act at this time, several of whom found themselves putting down the top hat and wand and taking up the camera full time: Georges Méliès, Billy Bitzer (who went to to be D.W. Griffith’s cinematographer), Emile and Vincent Isola, John Maskelyne, William Selig, Albert Smith (founder of Vitagraph, America’s leading pre-WWI film company), Félicien Trewey, Alexander Victor and others. Erik Barnouw has written a book about the phenomenon, The Magician and the Cinema. Film was seen as the ultimate magic trick, the perfect illusion, certainly a logical stepping stone for performers who wanted to tantalise audiences with the incredible.

Booth seems to have left the stage by 1901 and to have become a full-time filmmaker with Robert Paul, before joining Charles Urban in 1906. It is with Urban, and the greater opportunities that slightly longer films and more generous budgets offered, that Booth the filmmaker came into his own. He established his own studio at his home at Neville Lodge, Woodlands, Isleworth, and with camera operator Harold Bastick made a succession of ingenious films which employed trickery and made trickery their theme. He borrowed ideas from others: The Hand of the Artist (1906), the first British animated cartoon film, was a clear imitation of J. Stuart Blackton’s Humorous Phases of Funny Faces of the same year. When the Devil Drives (1907) was an adventure with the Devil as a lead character very much in the style of Georges Méliès. But equally he innovated in style and form: The Sorcerer’s Scissors (1907) is a dazzling trick film in which a pair of scissors cuts out various paper figures which they come to life. A Diabolo Nightmare (1907) sees an office clerk become obsessed with the game to such a degree that it takes over his dreams, which take him and his diabolo to the bottom of the sea. Other, lost films, tantalise us with mislaid delights: The Vacuum Cleaner Nightmare (1906), The Prehistoric Man (1908), The Star Globe-trotter (1908), The Invisible Dog (1909).

Extract from The Airship Destroyer (1909)

Booth’s best-known work is in then topical field of the invasion fantasy. Paranoia over immigration and terrorism (some news stories never change) combined with worries caused by the invention of the aeroplane – in particular, Louis Blériot’s feat in crossing the Channel in 1909 made England seem very vulnerable to invasion. What good was it having a navy if someone could simply fly over the top of it? William Le Queux’s anti-German novel The Invasion of 1910 and Guy du Maurier’s play An Englishman’s Home (1909) are the two best-known serious examples of the genre, while P.G. Wodehouse spoofed the ideas with his comic novel The Swoop!, or How Clarence Saved England.

Booth’s invasion films are closer to Wodehouse than du Maurier. They are not spoofs of the genre, and can be viewed as exciting adventures (which is how undoubtedly they were viewed by many at the time), but they have a homely, English quality, which accentuates the absurdity and suggests that Booth had his tongue in his cheek when making the films. The two that survive today are The Airship Destroyer (1909) and The Aerial Submarine (1910), though Booth also made The Aerial Anarchists (1911), a film sadly lost. In all three films the homeland is threatened by foreigners flying in futuristic contraptions. Aerial anarchy hangs over homely English places, and unassuming heroes who might on some other afternoon be happiest playing a game of tennis in the garden take to the skies in their flying machines to tackle this dastardly intrusion of misapplied modern technology. There is a quaint realism to the films, with their country lane backgrounds, that contrasts interestingly with the science-fantasies of Méliès which take place in a never-never world of the stage. Charles Urban was primarily a non-fiction film producer, and the films Booth made for him often had a topical edge, connecting the fantastical to the concerns of the day.

Booth continued with Urban to 1915, making many films now lost, including some in Kinemacolor. He also made films for the experimental 3D colour process Kinoplastikon (whose story I must tell some day). He went on to produce advertising films, and then we lose sight of him. He was married, to Sarah Grace, and had at least two children, Sydney Robert and Elizabeth Grace. He died in 1938. There are descendants somewhere, because I remember meeting one of them, introduced to me by the late Denis Gifford some twenty years ago. Denis’s acquaintance helped inform his biographical entry on Booth for Who’s Who of Victorian Cinema, which is still the best account of Booth that we have, brief as it is.

Someone should take him on as a topic. There are the references to his magic act in newspaper archives; there is some family history information available from genealogy sources; there is a marvellously inventive set of films that are prime examples of what fun early cinema can be. There is a distinctive artistry to those films. They find the fantastical amid the ordinary and make us delight in the plausibility of absurdity. It is magic translated to the screen.

One thought on “A movie magician”