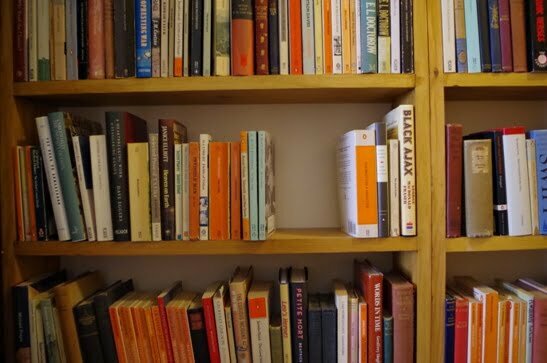 I am not a bibliophile. I do not collect or revere books for their own sake. I am not a book collector. The fact that I own quite a number of books stretched out across a fair number of shelves is because at each an every time of acquiring those books I needed to read them, refer to them, make practical use of them. And, having bought them (or been given them), I had to keep them.

That’s the oddity, because there is no real practical value is keeping hold of a book one has already read, particularly if available space starts to become an issue, unless it is to serve as reference for the future – or indeed will be worth reading again some time. But I keep them because by having been read by me they have become a part of me, and to see them lined on the shelves is to see one’s past thoughts and aspirations documented. And, of course, books do furnish a room.

So what of lost books? A few years ago, when I was selling a previous property, I decided to get rid of some books (probably a couple of hundred, chiefly novels) to make the place look less cluttered, and so took them round to Oxfam. Not a day goes by when I do not bitterly regret the decision. I reasoned at the time that it would be best to keep books that I had not as yet read, and to dispose of some of those that I had. This was completely the wrong thing to have done. I could have got a copy of those unread books at any time, but the books that I had read were unique. They were my books, a part of me, because they were the physical copies that I had bought, read, shelved, and seen grow along those shelves as they were joined by other books. I had got rid of a part of myself.

Why, for instance, did I dispose of all those Alexandre Dumas novels, whose thrilling romantic adventures so engrossed me when I was a teenager? What on earth was I thinking on when I parted with a dozen or more Balzac novels, which I read obsessively in my mid-twenties, exhilarated by how a minor character in one volume of his Comedie Humaine could because the leading character in a next, as a vast alternative world emerged from those thousands of pages? Some of those novels I dispensed with because I did not like them and felt better for having seen the back of them – Anthony Powell’s A Dance to the Music of Time brings back thoughts of particular loathing (yet I read the whole sequence just to find out how much I did loathe it). Some I had read halfway through only to grow weary – Olaf Stapledon, Rex Warner, Emile Zola, assorted Thackerays. But all had been part of my reading history, and now the gaps in the shelves were gaps in the memory.

Of course I could go out and find replacement copies, but that would be all wrong. The point is the physicality of the book as object, as something with a personal history. I can tell you where I bought every copy of the books on my shelves. I can remember the circumstances in which I bought them, when and where I read them, and where my reading took me next because I had read them. Each book told not just a story, but its own story which by extension became a part of my story.

A book I’ve just finished reading is Henry Kissinger’s World Order. It is a marvellously wise and knowledgeable account of the progress of history and the role of political strategy. It is a great book, and also a handsomely produced one (courtesy of Penguin Books), in which the book’s design and construction are harmoniously at one with the book’s grand themes and acute style. Towards the end, in a thoughtful section on the impact of the Internet on society, Kissinger has this to say about books:

The acquisition of knowledge from books provides an experience different from the Internet. Reading is relatively time-consuming; to ease the process, style is important. Because it is not possible to read all books on a given subject, much less the totality of all books, or to organize easily everything one has read, learning from books places a premium on conceptual thinking – the ability to recognize comparable data and events and project patterns into the future. And style propels the reader into a relationship with the author, or with the subject matter, by fusing substance and aesthetics.

This is as good an argument for the value of books as I have come across. Kissinger’s point is that the Internet excels as a supplier of information, but it falls down – indeed probably impedes – the acquisition of knowledge, and wisdom. Books take time to read, and that expense of time encourages constructive thought and the learning of lessons. Style is essential too, because style conveys humanity (though style alone is not enough, or else I would not want to be so harsh on Anthony Powell). But time is the key. Books take up time; their physical presence marks out time spent.

To manage time and learning is to earn understanding. To lose the books through which I have learned what little I know is to have thrown away time, to have shortened life a little. Of course I still have the experience of having read those books, and the memory of their loss shows the importance that they had. But they are not there, and I feel that that my bookshelves are telling lies about me, or at least not telling the whole truth.

Yet I could go out and get those Balzac novels again. They would not be the books that I read when twenty-two, but if I read them all again they would belong to the me of thirty years later. They would be taking their place again in a different part of the story. Would that be so bad? I think I should try. The Wild Ass’s Skin is where to begin, if memory serves me right…