The national newspaper collection is on the move. Next month, the British Newspaper Library – part of the British Library – will be leaving Colindale, north London, its home since 1932. Countless researchers have made use of the Colindale reading rooms over the past eighty years, and it is held in great affection, but few I think would disagree that the place was coming to the end of its natural life. Little changed architecturally from the 1930s, the place has an antique charm, with large volume newspapers being wheeled on venerable trolleys to researchers seated at vintage tables, the very embodiment of libraries from another age. The fixtures and fittings, like the bound newspapers themselves, shedding bits of leather and fragments of fading newsprint, belong to a time when the word digital might only refer to the use of fingers to leaf carefully through the pages. Though there are microfilms readers, and an annexe to the original reading room which is of more modern design, the Colindale library looks and feels as though time has passed it by. 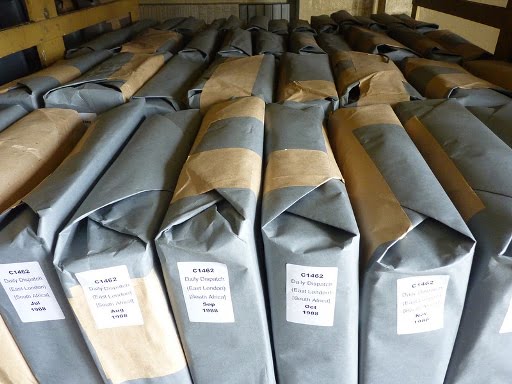 The time for change has now come. The British Library has been engaged in a huge newspaper programme over the past few years, designed to safeguard the nation’s newspaper heritage long term. This programme has included building a new Newspaper Storage Building at Boston Spa in Yorkshire, digitising some 40 million pages (7 million done so far) and making these available online via the British Newspaper Archive site, closing down the Colindale library, and opening a new reading room at the Library’s main site in St Pancras, central London. The intention is to keep the newspapers in optimum storage conditions with carefully controlled temperature and humidity at Boston Spa, such as Colindale does not provide. Researchers will be provided with microfilm and digital ‘surrogates’ at St Pancras. This should serve most needs, but where no surrogate copy exist it will still be possible request the print originals from Boston Spa; so long as they are in good enough condition to travel, they will be delivered delivered to St Pancras within 48 hours. 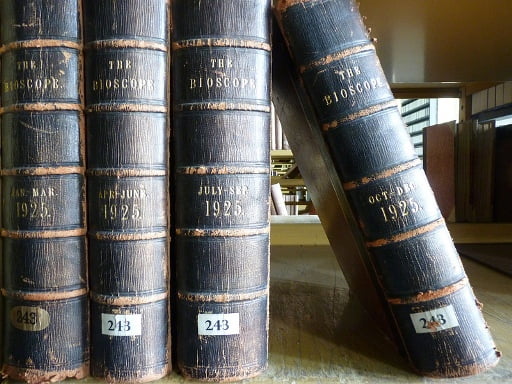 The Colindale library closes to the public on 8 November 2013, with the new reading room opening in 2014. Many researchers have been making special trips to Colindale to sample its particular research experience for one last time. What none will see, however, is how things look behind the scenes. On six long floors, with assorted adjoining areas, the national newspaper and periodical collection stretches on and on and on. The numbers are mind-boggling – 660,000 bound or boxed volumes, 630,000 microfilms, around 100 million individual issues, 750 million pages, 50 kilometres of shelving. 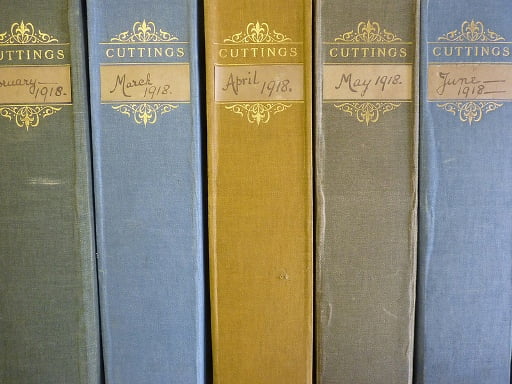 Being newly appointed as the news curator, I was privileged to walk along that shelving recently, and decided to make a photographic record. Already the shelves are not as full as they once were: the periodicals have largely gone already, and the newspapers are being readied for transportation. But still volume after volume after volume stands in neat order, a monument to the irrepressible human urge to write things down, to communicate with one another, and to identify themselves by occupation, interest and place. 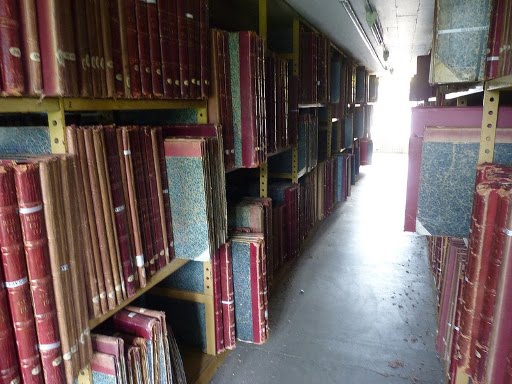 The sheer size of some of the bound volumes astonishes. It’s a major engineering undertaking simply to take some of them off the shelves. The hugeness of such newspapers indicates a time when the majesty of the press was reflected in the way it occupied the entirety of the breakfast table. The tabloid press of today denotes a more hurried age, when the newspaper has to fight for the reader’s attention amid so many other compact, diverting attractions. And as the newspaper goes digital so does its special identity get swallowed up in a forest of apps, games, programmes, tools and assorted entertainments. The news is no longer weighty; it now flits from platform to platform, anxious to please, uncertain of its survival. 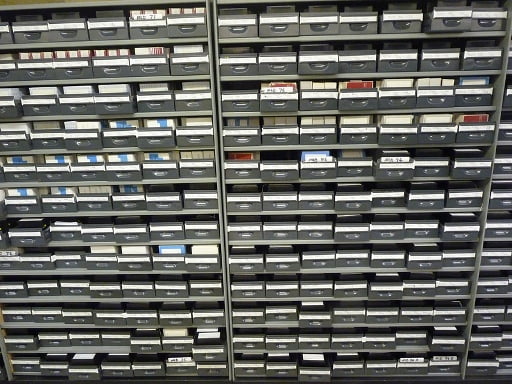 The Library’s newspaper collection goes back to the seventeenth century and the birth of the newspaper itself. Systematic collecting did not begin until 1822 (earlier newspapers come from private collections donated to the British Museum). Publishers were obliged to supply copies of every newspaper they published to the Stamp Office for the purposes of taxation. These copies were transferred to the British Museum, until 1869 when newspapers were included in legal deposit legislation and were thereafter sent directly to the Museum. That process of donation under legislation continues to this day, with each issue of just under 2,000 UK and Irish newspaper and weekly or fortnightly periodical titles received per year. In times past they were bound in volumes (just think of the years of industry involved in managing the binding alone of the British newspaper collection); now they are collected in boxes. The collection grows at just under 300 metres per year. 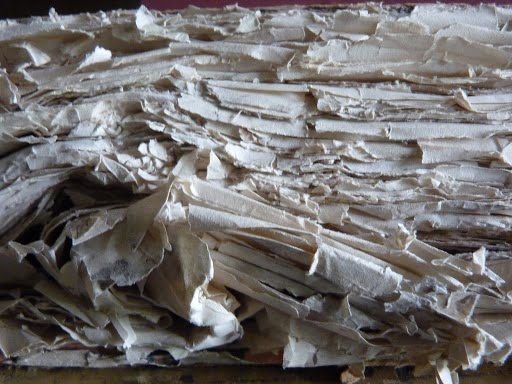 To wander up and down the shelves to is witness the nations and regions of the United Kingdom talking earnestly, passionately and insistently to one another, witness to democracy, debate, conviction and modernity. All of the great national titles are there – The Times, The Guardian, the Daily Telegraph, the News of the World – but also mile upon mile of the regional press, especially prominent in its nineteenth century heyday, when news of the nation and of the world beyond could be found just as readily in your local paper as in the national titles, and when such titles spoke with the voice of Victorian confidence and authority. 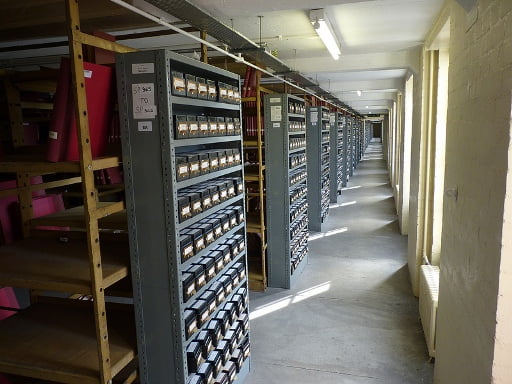 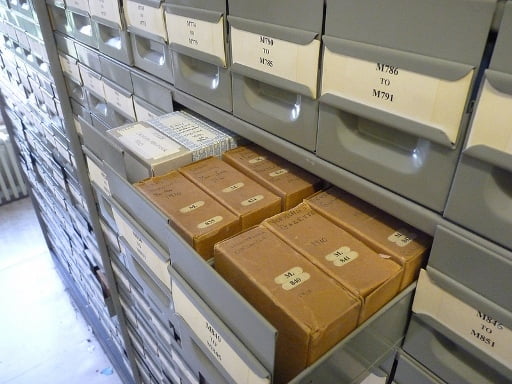 The newspaper volumes have a weighty beauty about them, even those with more modern bindings that lead to uniform colour and well-regimented order. But the rows upon rows of reels of microfilm are no less fascinating, witness to the imperative in recent times to compress knowledge into ever smaller spaces as we say more and have less physical space remaining in which to store what we have said. For many researchers, historic newspapers do not much exist in print at all; they are familiar with the whirr of the microfilm reader as they scroll page after page in search of that elusive piece of evidence that will prove a thesis, identify a long-lost relative, or confirm a conspiracy. Print and microfilm are ultimately a means to an end, which is to locate the word. 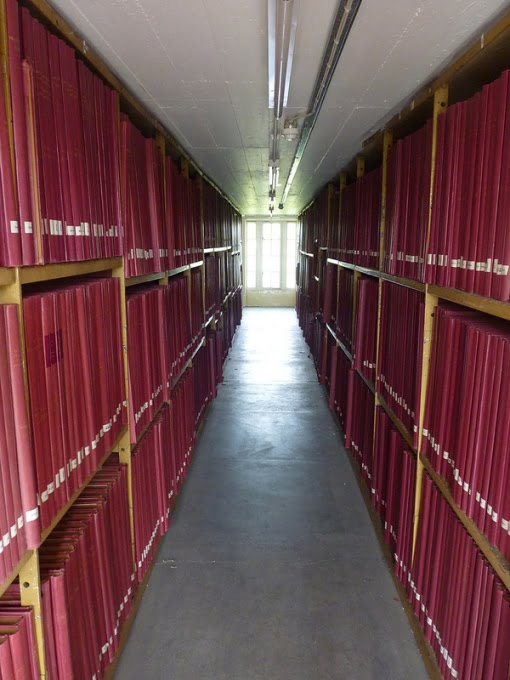 Just how many words are there? If there are 750 million pages, and let’s say 2,000 words per page, then that’s 1,500,000,000,000 words. How will we ever read them all? Digitisation is of course coming to the rescue, albeit selectively – the Library’s project with family history company Brightsolid to digitise 40 million pages in 10 years will cover 5% of the current collection – but the words serve as much as a monument as food for some putative, future thesis. The sheer weightiness of what was said (and bought by those who wanted to read what was being said) tells the history of our times as much as perusing the papers themselves. The volumes, boxes and reels tell their own tale of the manifest importance of news to the nation. You may judge a nation by the diversity, variety and vigour of its press. The contents of the shelves of Colindale tell that tale magnificently. 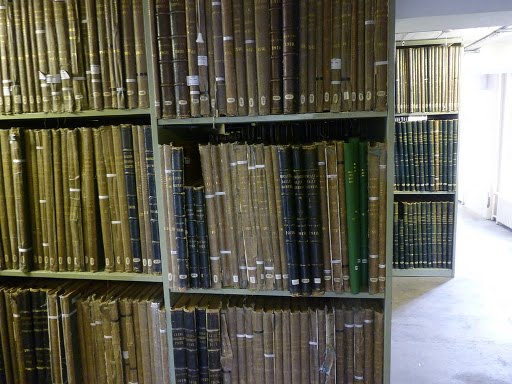 But they are now being taken from those shelves, and in order that they may always tell the tale of what was said and how it was said they are being moved to storage facilities where no-one will be able to walk up and down the shelves and see history in the same way again. Instead we have catalogues, and databases of digitised papers, offering a range of content and range of options for searching that has changed research radically, and hugely for the better. If we are no longer in the golden age for newspaper publishing, we are undoubtedly in a golden age for newspaper reading. 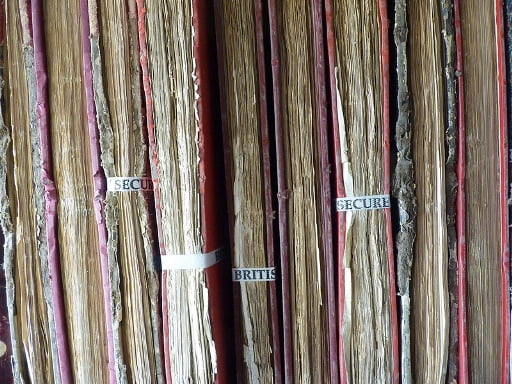 The question that occurs on perambulating the shelves at Colindale is how long print will last. How long will 300 metres of newspapers be added to the collection year after year? How rapid will be the newspaper industry’s conversion to digital? No one knows, though the reports of the death of the newspaper in some quarters may be a little premature, given that the advertising money is still very much concentrated on print rather than online. But the paper will run out eventually, and only a series of 1s and 0s on ever-growing banks of servers will take its place as history comes to be weighed no longer in tonnes but in terabytes. 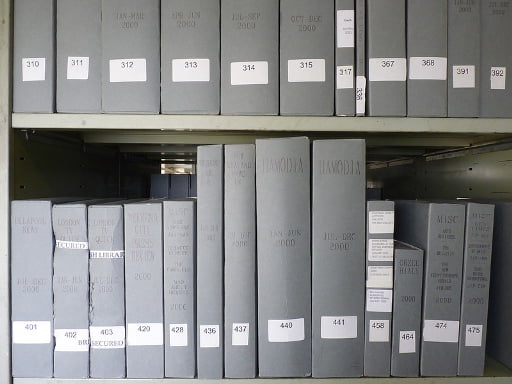 And what are 750 million pages in the present-day scheme of things? That entirety of British newspaper production is going to be eclipsed by one single impression of the UK webspace when the British Library makes its first ‘crawl’ of all .uk websites under the new non-print legal deposit legislation. One billion web pages could be captured, for this year alone. It will become impossible to comprehend just how much we have to say about ourselves and how much we leave behind for others maybe one day to discover. Especially when we can no longer walk along the shelves and measure it all somehow with our own eyes. 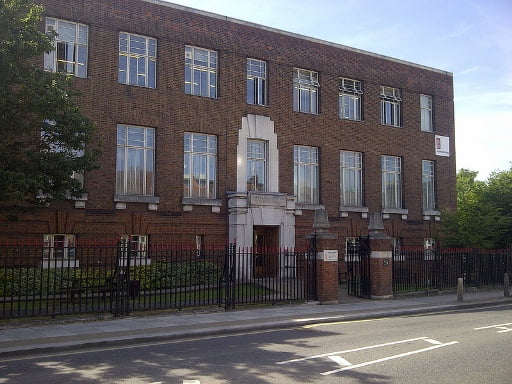