I was in the town of Lund in southern Sweden last week, attending a seminar on newsreels, which I’ll write about in due course. Lund is a pleasant, quiet town of around 100,000, almost half of which are students. I had half a day in which to mooch around the town, and so it was that I came across Skissernas, or the Museum of Public Art, which instantly became one of my all-time favourite art galleries. So newsreels later, art now.

Skissernas (meaning sketches) was founded in 1934 by Ragnar Josephson, Professor of Art History at the University of Lund. His plan was to collect sketches, models, photographs or other preliminary versions of works of public art. The intention was to document the creative process and to concentrate on an area of artistic production that was seldom exhibited and not always collected elsewhere. Artists responded to the novel plan with enthusiasm, with donations helping to boost the collection quickly at relatively low cost. The emphasis on works which had been originally displayed in public places gave the museum an additional element of originality. In short, there is no other museum or gallery like it.

The special quality of the place is apparent the moment you enter the first exhibition room, the Swedish Hall. You are hit by an overwhelming display of images which are unfamiliar, eye-catching and presented in amazing profusion. We are used to art galleries arranging paintings at a respectful distance from one other, sometimes with huge areas of empty space so as not to interfere with the special aura of any one particular work. Not so here. The sketches and paintings are everywhere, crammed next door to one another, reaching up to the ceiling, and – in the next-door International Hall – spreading out over the ceiling as well. Large labels are necessary to identify works placed so high, but this becomes a virtue in itself, as you can see immediately the artist’s name, title and date of the work without having to peer up close. Combined with statues large and small dotted about the rooms, the effect is quite exhilarating. An absence of heavy frames accentuates the immediacy and appealing rough-and-ready nature of the exhibition. There is even a viewing gallery up a flight of stairs, enabling you to see the works higher up at better advantage (also offering excellent views down upon the works below).

There was once a time when all art galleries were like this. Paintings such as William Frederick Witherington’s ‘A Modern Picture Gallery’ from the early 19th century illustrate a time when it was usual to pile in as many pictures as could be fitted onto the walls, the emphasis being in the cornucopia of delights rather than to hymn any individual work of art. The result, in such paintings, looks a little overwhelming, even absurd, but I think that is due in some part to the sameiness of the artworks and the frames. In the Museum of Public Art a great diversity of work clamours for the eye’s attention, exciting the brain and in a strange way accentuating the appeal of the individual works. It also gives a sense of being in an artist’s studio, appropriate for a museum dedicated to documenting work-in-progress. One’s immediate reaction is to wish that some, if not all galleries could be like this. It is the very opposite of pretension.

The main gallery has four halls: Swedish, International, Mexican (being renovated on the day of my visit) and Sculpture. The first floor area contains temporary exhibitions, and there are assorted works playfully arranged outside in the Museum’s sculpture park.

There are many Swedish and Nordic artists on display, including Sigrid Hjertén, Stellan Mörner, Hugo Gehlin and Isaac Grünewald. Among the more celebrated names in the International, Mexican and Sculpture Halls are Fernand Leger, Diego Rivera, Henry Moore, Henri Matisse, Christo, Raoul Dufy and Marc Chagall. None of the work is familiar, each being works that were originally displayed in public areas, often for a short period of time and not generally represented in galleries. Photographs are occasionally displayed showing the art work in its actual location. Examples include Matisse’s sketches for his Chapelle du Rosaire at Vence and Diego Rivera’s ‘The New Deal’, part of a mural painting for New Workers´ School in 1933. These were works designed to catch the eye in public spaces, and this commanding nature is excitingly captured in the high-ceilinged halls.

Upstairs the galleries are mostly dedicated to temporary exhibitions – at the time I was there, this meant ‘Species of Space’, the work of sixteen students from the Masters Program in Fine Arts at the Malmö Art Academy. These imaginative and sometimes witty works fitted in well with the imaginative responses to particular spaces and commissions that existed downstairs, though the works were separated from one another a little more conventionally. This is inevitable, given the taste for irregular forms that the art of today now takes, but I missed the the profusion of the lowers halls, with their sense of democracy, vitality and opportunity.

It makes you think why we have the galleries that we do have. They are spaces designed for exhibition, of course, but also for contemplation and perambulation. We (mentally) genuflect before each work, and then move on. It is the physical expression of leafing one’s way through a handsomely produced catalogue. Indeed, given the mass worship there is at major art exhibitions, following the intended narrative through a catalogue becomes the only way to enjoy the exhibition in its ideal form, as opposed to the scrum in the gallery itself. At Skissernas we are obliged to stand still, and marvel at all that has been arranged about us.

There should be more chaos in how we present art, more wonderment and less reverence. Of course it is good to go to a gallery and contemplate some fine work by itself – though that in itself is a rejection of the conveyor belt-like experience that conventional galleries offer us. I would not want every gallery to be like the one in Lund, but I would quite like to see some, and never before have I visited such an exhibiion and come out with the overwhelming wish to build such a space myself. There are different ways of seeing. 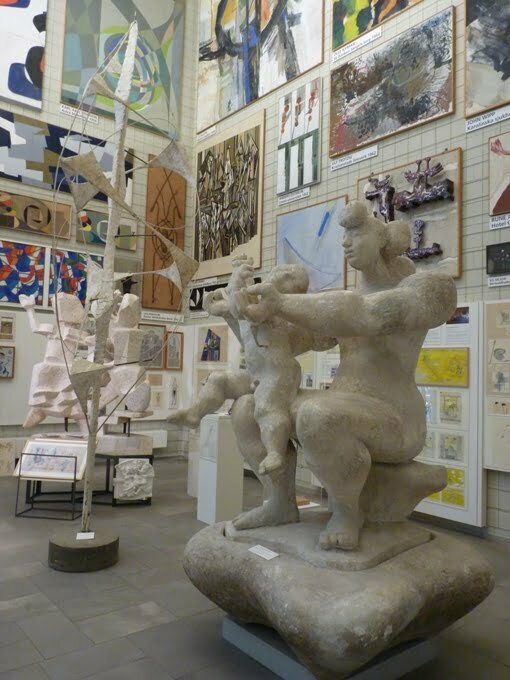 The Skissernas Museum / Museum of Public Art website has information on the museum’s history, its permanent and temporary exhibitions, and illustrates some (though I wish it were more) of the works on display.