“Ten years ago, there was a very real danger of a black hole opening up and swallowing our digital heritage, with millions of web pages, e-publications and other non-print items falling through the cracks of a system that was devised primarily to capture ink and paper.

The regulations now coming into force make digital legal deposit a reality, and ensure that the Legal Deposit Libraries themselves are able to evolve — collecting, preserving and providing long-term access to the profusion of cultural and intellectual content appearing online or in other digital formats.”

On April 6th the regulations were finally put in place to give the six UK legal deposit libraries the right to receive a copy of every UK electronic publication, on the same basis as they receive print publications. Knowledge and cultural output do not exist exclusively on paper but on a multiplicity of forms, and at last it has been recognised that those six libraries – the British Library, the national libraries of Scotland and Wales, the Bodleian Libraries, Cambridge University Library and Trinity College Library Dublin – should be able to collect blogs, e-books, e-journals and websites.

The advantage of digital files is that they can be shared, and rather than each of the six libraries each going out and archiving the UK web domain on its own is that the collecting can be centralised and then made available at each of the institutions. It won’t be a case of the archived websites being available on the Web. Instead the regulations stipulate that access can only be provided onsite at one or other of those institutions, and if one person is viewing any electronic file archived under the legislation then no one else can do so until that person has finished viewing it. So the electronic archived outputs are being treated pretty much as though they were physical objects.

Nor is it a case that if you turn up at one of the libraries next week that all of the UK’s web past will be there at your fingertips. They haven’t started collecting it en masse as yet, though there is a small selective archive, the UK Web Archive, which has been operating for some years now after obtaining permissions for the owners of selected sites (a laborious process, as may be imagined). They will need to start crawling the UK web domain, targeting an initial 4.8 million websites, with the first results to be available by the end of this year. The UK web domain is expected to be harvested once or twice a year (ie. virtual ‘crawlers’ are sent out to gather in data from sites, focussing on .uk addresses), with more frequent crawling for some specialist areas. Likewise by the end of the year there will be tens of thousands of e-journal articles, e-books and so forth, collected from publishers.

So it is going to take a time to grow, and some elements are going to drop through the net (the average life span of a web page is 75 days), but the implications are huge, not least for what we perceive the role of our national libraries to be. There are many who treasure the notion of the British Library and its ilk as temples to the book, where scholars gathered in hushed surroundings, leafing carefully through finely-bound manuscripts, protected from the rude intrusion of the outside world and its electronica. No more! A library is a means of gathering and making available knowledge, a centre for trusted intelligence. It must be shaped not by any one medium but by the forms in which documented knowledge takes. This is what is now happening. 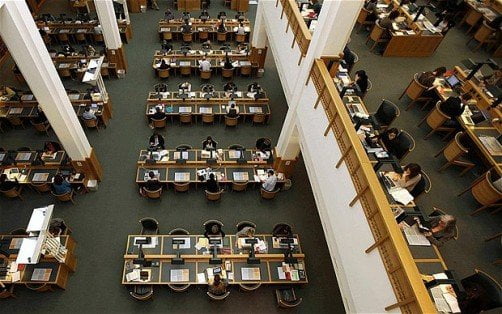 However, it’s not quite a perfect world. The legislation on which all this is based is the 2003 Legal Deposit Act (so it has taken ten years to get the regulations in place which determine how what was legislated for in 2003 can work in practice). That was in turn based on the findings of the Working Party on Legal Deposit, headed by Sir Anthony Kenny, back in 1997. His committee set out

to advise on how an effective national archive of non-print material might be achieved, taking into account the need to minimise the burden on publishers, the need to safeguard deposited material from unauthorised use, the archival value of the material, and the scope for making deposited material available among legal deposit libraries through secure IT networks.

It is of fundamental importance that a legal deposit scheme for audio-visual materials recognises their innate physical characteristics and vulnerability and the need to acquire them in new condition. This is to ensure that they are preserved at minimum cost to the taxpayer, and can be studied and enjoyed in the future in the pristine form their creators intended.

Its recommendations were as follows:

4. The aim of a fully effective legal deposit scheme for audio-visual materials should be to protect an original master version of the film or video for permanent preservation and to hold a premiere-version reference copy for study and screening.
5. In the case of films shown or published in the UK, it is proposed that the following materials be deposited:
a) British films (however defined): (i) A mint print of the authorised premiere version, to be delivered to the repository within 30 days of the first showing. (ii) After three years (or other agreed period), the original negatives or acceptable alternative pre-print materials.
b) Other films shown or distributed in the UK: A best copy of the film in the form first shown in the UK.
6. In the case of videos, the deposit materials should consist of a mint-condition duplicate original and new reference copy (if British); a new-condition reference copy (if imported).

In practice this did not happen, and audio-visual media of themselves were not included in the Legal Deposit 2003 Act, which specifically excludes the obligation to deposit sound recordings or film (“A work consisting solely or predominantly of film or recorded sound (or both), where other forms of content are purely incidental”). The reasons for this were as much practical as anything, with the emphasis having been put on physical items and the need to preserve the best possible film elements. Which is costly, and comes with all manner of operational challenges.

While that probably made sense back in 1997, how utterly short-sighted it looks now. Digital video has totally revolutionised our ideas of what a moving image object is, how it it produced, by whom it is produced, what is cultural value is, how it is consumed or shared, and how it fits in with the rest of the digital world. So it is that while we can now start to take in the whole of the UK web domain, that doesn’t mean the moving image and sound parts of it. We can’t capture under legal deposit a video that documents something vital – say a piece of citizen journalism with unique footage of a news event – because of worries from sixteen years ago about caring for 35mm feature films. Audiovisual means knowledge too – so why have we left it out?

Well, we haven’t entirely left it out. The legislation does allow for a degree of leeway, and the 2013 regulations stipulate that it will be OK to include the audiovisual elements of websites where they are incidental to its knowledge value. As the British Library’s guide puts it:

Removing the audio-visual elements from a work that consists solely or predominantly of recorded film or sound (or both) would leave little or no intelligible content. Thus, for example, the 2013 Regulations do not apply to a cinema film DVD, a music CD, broadcast or streamed TV and radio programmes, or UK-published content in online sites such as LoveFilm, YouTube or Spotify.

However the 2013 Regulations do apply to a work that includes audio-visual material as a feature within the main body of work rather than as its main purpose. Removing the audio-visual elements from such a work might well diminish the work’s content or the user’s experience of it, but would not eliminate all of its value. Thus, for example, the Regulations do apply to most websites containing sound or video clips (such as the BBC’s website) because they also include text- or image-based content; the Regulations would also apply to any e-book, e-journal or e-magazine containing embedded sound or moving image files to the extent that the embedded files are published under the control of the publisher.

So if it wouldn’t affect the website too greatly if you took away the audiovisual, it’s OK to harvest them. It’s a bit of a lame argument, but it does mean that they will avoid the absurdity of either leaving out such media or avoiding any websites which has moving image or sound elements.

How far such collecting of the audiovisual by incidental means will extend I don’t know, and I don’t think anyone else knows as yet. But it’s an apology for true legal deposit for moving image and sound, and it’s hard not to think of the decision as having had its roots in cultural hierarchy, by which books comes first, other printed media second, and somewhere down at the bottom when it comes to value to the nation’s well-being and store of knowledge, lies the audiovisual. It’s just light entertainment, isn’t it?

Arguably there is a degree of legal deposit for UK television, because the 1990 Broadcasting Act legislated for a national television archive which would record a proportion of national television output, funded by the broadcasters (the national television archive is administered by the British Film Institute). Nor has the absence of legal deposit legislation meant that our film and sound archives are empty. Thanks to donations and voluntary deposit arrangements a substantial part of the UK’s film and sound output has been archived. The British Library’s National Sound Archive takes in around 50% of all UK published audio output through voluntary arrangements with the music publishing industry, for example.

But it’s not enough to rely on goodwill, no matter how good that will may be. We are losing thousands upon thousands of moving image records because the systems do not exist to care for them all, and because our thinking in this area has been too much focussed on the frankly minor field of feature film production.

It is quietly recognised that the absence of audio and video from the 2003 Act is regrettable, and will need to be addressed eventually. Legislation will come around eventually which incorporates all media. But legal deposit acts don’t turn up every year, and who can say how long it will be until we can properly include audiovisual media in the nation’s memory – and what will have been lost while we have to wait.

2 thoughts on “Here comes not quite everything”