I don’t feel easy writing about classical music. It’s something that I greatly enjoy listening to, and something with which I am broadly familiar, but I lack the critical understanding of such fine matters as harmony, counterpoint, sonata form and so on. My understanding is impressionistic and probably sentimental. Give me a piece of writing, or a picture on a wall, or anything projected on a screen, and I know where I am. With classical music, I have the map, but no compass.

So it is that I’m a little apprehensive stating that my favourite composer is Albéric Magnard. Magnard should be no one’s favourite. He’s what they call a minor composer, generally consigned to a passing mention in histories of late 19th/early 20th century French music in the Romantic vein, described in terms of his similarities to other composers of greater reputation. But I have been working on a long piece of writing, and I have been playing through all of my recordings of his music, and find his music surging through my mind, so that I must set aside that long piece of writing and write on the music instead.

I like Magnard because I feel I know and understand him. He was the first composer where I grasped what he was doing through his music. It was 1983 and I was working on some essay, tapping away at my ricketty typewriter, and I had Radio 3 playing in the background because I was tiring of pop music. On came Magnard’s Symphonie no. 4, with the Orchestre du Capitole de Toulouse conducted by Michel Plasson, newly released by EMI. It was mournful, lyrical, questing and harmoniously constructed. It told a story in musical terms and it had – to me – such a force of personality behind it. I knew and understood, and have been a devotee of Magnard ever since.

Albéric Magnard (1865-1914) was the privileged son of the editor of Le Figaro who decided to forgo such privileges in his pursuit of a life as a composer, and his whole life seems to have been a battle between duty and independence. He enrolled at the Paris Consevatoire, studying under Vincent d’Indy, producing his Opus 1, Trois pièces pour piano in 1886. A flurry of symphonies, symphonic poems and chamber pieces followed through the 1880s/90s before his composing activities slowed down, partly because of his professorship at the Schola Cantorum but also on account of encroaching deafness, which helped make an austere and somewhat misanthropic man all the more withdrawn from the world.

He was indifferent to general acclaim, seeking only the approval of his fellow composers and the cognoscenti, an attitude was a mixture of pride, fear, and genuine seeking for an honest understanding of what he was trying to achieve. The mixture of austerity and reserve that characterised the man can be judged by the fact that just two photographs of him as an adult appear to have survived (both reproduced here). He retired from noisy Paris to Baron, near Senlis, and produced occasional works including the operas Guercour and Bérénice, a single string quartet, and in 1913 his fourth and final symphony. Most of his compositions were published at his own expense, and public performances seem to have been few. He produced only twenty-two opuses in his lifetime.

Magnard is best-known for his tragic end. At the outbreak of the First World War, with the German forces approaching the Senlis area, he sent his family away. On 3 September 1914, German soldiers entered his property. He shot one, perhaps two of them. Called upon to surrender or face the consequences, he refused to submit. The Germans thereupon set his house on fire. Magnard died in the inferno, which consumed most of his manuscripts, the works of his imagination dying alongside their creator.

Magnard’s music is at one with the man. Commentators have variously compared his to other composers of his time, including Franck, d’Indy, Rousell and Bruckner, with the implication that he is a paler imitation, but he is best understood as an individual whose unique voice has only superficial similarities to the works of his contemporaries. The tension between public and private, between duty and independence, is the driving force behind all his greatest works. He is forever trying to work out an argument, harmoniously resolving debate through dialectic and narrative form. 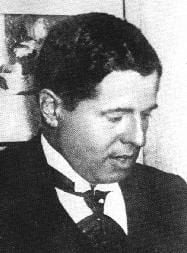 Some of his most characteristic work can be found in his symphonic poems. Chant funèbre (op. 9, 1895) was composed in memory of his father Francis, who died in 1894. The mournful, serene work is drawn from the love and frustration Magnard simultaneously felt towards his father. A steady, funereal tread forms a motif that that is gradually coloured by the strings to turn from grief and regret to affirmation. It is a beautiful expression of the rediscovery of love. The impassioned Hymne à la Justice (op. 14, 1902) came out of Magnard’s anger at the the injustice meted out to Captain Alfred Dreyfus, the Jewish officer falsely accused of communicating military secrets to the Germans. Magnard resigned his army commission over the affair, and it is heartening to know that this principled man was on the side of true justice (he was an earnest advocate of human rights, particularly women’s suffrage). It is a powerful piece of surging but controlled emotion, culminating in a triumphal resolution, as the music expresses how right overcomes might. The lyrical Hymne à Venus (op. 17, 1904) is dedicated to his wife Julie Creton. It does not have the narrative underpinning of Chant funèbre or Justice, but is tremulously rhapsodic, melodic yet questing for something the music cannot quite seem to find, until all is resolved its exultant finale.

Magnard’s symphonies are a marvellous achievement. For many years, because they lay unrecorded and seldom played, some peculiarly dismissive statements of their worth appeared in music encyclopedias – peculiar because the experience of listening to them is so very different, and so uplifting. The first is a remarkably assured work for an opus no. 4, composed in 1890 when he was just twenty-five. It already demonstrates the main features that would characterise the mature composer: the lush sonorities, the questing argument, the triumphal conclusion. The second (op. 6, 1893, revised 1899) is busy, inventive, lyrical and luxuriant, if a little untidy in the way in packs in so many musical ideas.

The third symphony (op. 11, 1896) is a wonder, from a spine-tinging, organ-like motif, through a complex interweaving of dance tunes, surging melodies, dirges, poignant lullabies and urgent rhythmic sections, all in search of something, finding resolution in the exhilarating return in the finale of the majestic opening motif now with dancing strings playing around it. It is among his most immediately approachable works and a good starting point for anyone interested in discovering Magnard for themselves.

The fourth symphony (op. 21, 1913) is Magnard’s masterpiece. It is a beautiful but troubled adventure across some idealised landscape. In the notes to one version on CD Philippe Mougeot writes:

Action or contemplation, the musical thought seems to spring up fully armed, clothed in its own sonorities … the cyclic elements, still present [i.e. from earlier works], but used less systematically, now colour the supplementary motifs: the overall impression is of a fullness and joy in the sound picture

while in another set of notes Jean Gallois says of the finale:

Rhythm, colour and creative imagination culminate here to blaze and swirl in a superb 3/2 metre, gradually weakened, broadened and sobered in expression, as if the resurgence of the cyclic theme raised two questions simultaneously: What’s the use? … Perhaps …

Doubt and unsure hope characterise Magnard’s art, forever in search of the ideal, trying to confirm in music what the man struggled to comprehend in actual life. The fourth symphony is its perfect expression.

The opera Guercoeur (op. 12, 1897-1900) features characters such as Truth, Goodness, Beauty and Suffering, and though it has passages of some beauty it mostly suggests to me that Magnard’s idealism was best expressed without the literalism of a libretto. It is a miracle that we are able to hear it, as two acts were destroyed in the fire that killed the composer, but the opera was reconstructed from memory by his friend Guy Ropartz (a piano transcription and one orchestrated act had been published beforehand). His later opera Bérénice (op. 19, 1905-1909), is reported to be the greater work, but I’ve not heard it and it is not available on disc (though, inevitably, the audio of a performance of the entire work has turned up on YouTube). The score for Yolande (op. 5, 1888-1891), an early one act opera, went up in the flames.

Finally his chamber music is contains some of his most satisfying and accomplished work: a contemplative Sonata for violin and piano (op. 13); a highly accomplished, complex string quartet, whose difficulties defeated the players on its 1904 premiere, but it is now reckoned among his greatest achievements (op. 16); a Quintet (op. 8) of such freshness and harmony, it turns any day you listen to it into summer.

And then not much more. Twenty-two works in all, most of which have been made available on CD over the past three decades since that Plasson recording of the fourth symphony triggered a mini-boom in Magnard’s music. Some of those CDs have been dropped from the catalogue, but it is not difficult to find a good proportion of his surviving work one way or another. But it has only been a mini-boom. I think he remains unknown to most classical music followers; shamefully, he has never once featured in the 119 years of the Proms.

Magnard is not a great composer. He is a minor artist, but of the kind that helps render such qualitative assessments redundant. As an artist, he is what he needed to be. I find it easier to think of him in filmic terms, as an auteur – someone whose consistent personal vision ran throughout his oeuvre. His work, particularly the orchestral pieces, reaches for the skies, but there is someone very human behind it all, whose questing character, hoping against hope that there is good to be found somewhere, can be read by anyone whatever their musical knowledge. The music is as approachable as its composer in real life was not. If you want to put a label on it, then it is late Romantic music of the kind that was swept away in 1913 by Stravinsky. But forget the musical tags and timelines, and just listen to what one man had to say, and how he was able to express it. It has a true voice.