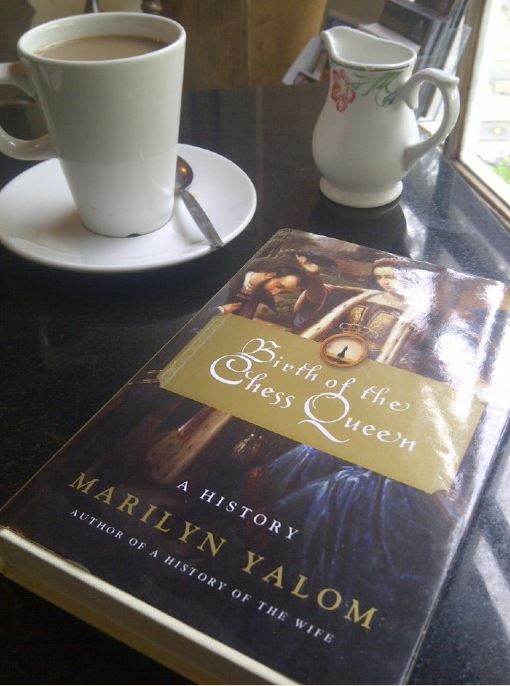 I’ve had enough of these long, infrequent posts. I spend ages deliberating over what to write, then still longer putting off writing itself because it takes up so much time – and once I’ve started I can’t stop. Shorter, pithier, more frequent – that’s what’s required.

In the interim, here’s a photo from today, taken at my favourite spot, the Precinct Pantry in Rochester, next door to the cathedral. In a town filled with coffee shops that are filled with people, the Precinct Pantry remains remarkably empty, despite its location, quaint charm, and prices at half anyone else charges on the high street. Goodness knows how they survive, but long may they continue to do so (while continuing to be overlooked by the herd).

The photo is one of a series that I tweet under the title “the book I’m reading, the drink I’m drinking”. For what reason, I don’t know. The drink is invariably a decaff white Americano. The book changes frequently, though never frequently enough to keep up with the pace with which I buy books. The title finished today was Marilyn Yalom’s The Birth of the Chess Queen, spotted in the Oxfam shop at Canterbury (I like to remember where it was that I found a book). It’s a history of chess through the figure of the Queen, showing how the piece that was originally a vizier became feminised, and then gained extra powers on the board, around the time that powerful queens ruled in Europe – in particular Eleanor of Aquitaine and Isabella of Spain. So it’s a history of women’s power seen through the prism of the game of chess, with a sad coda on how an equality of the sexes over the chessboard has been lost since the Middle ages. Given the troglodytic misogyny of so many in the chess world, it’s hugely refreshing to read a chess history that’s so fresh, inventive, and – despite everything – optimistic. Warmly recommended for anyone, with no knowledge of chess required.

Now the cup is drained, the last page turned, and on to the next book – a life of W.T. Stead…