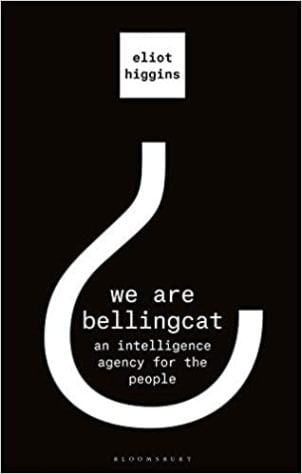 I have been reading We Are Bellingcat, by Eliot Higgins. Subtitled ‘an intelligence agency for the people’, it is an account of the rise of of a group of dedicated open-source investigators, whose means of analysing openly available material on the Internet to investigate such stories on the downing of Malaysia Flight 17 to the attempted assassination of the Skripals has made the news in every sense. Higgins, its founder, was a bored administrative worker with a fondness for video games but a passion for news, who taught himself how to use evidence left by social media, YouTube videos and openly-available documents across the globe, to find out what – in a world of disinformation – what actually happened. It’s a simply pursuit for the truth.

Higgins was not only self-taught, but acquired skills that were new, unused by news organisations or – apparently – intelligence agencies. Though one might be sceptical about the latter, it is undoubtedly true that Higgins was applying methods that were new to most, leading to his teaching such skills to police forces, military, think tanks, academics and politicians startled at what could be found with the right software tools, lateral thinking, and a good deal of patience. Higgins met up with, or inspired, others in several countries with similar abilities and ideals, resulting in Bellingcat, founded in 2014. The group rapidly became famous through its uncovering of evidence on which side shot down the M.17 (much of it gleaned from videos posted by Russians and Ukrainians with dashboard cameras, and from messages posted by homesick soldiers to their families). When British prime minister Theresa May spoke on the TV news about the irrefutable nature of reports into who brought down the M.17, because it came from open sources, you knew Bellingcat had arrived.

Success has brought its trials. Much of We Are Bellingcat is devoted to defending the group and its methods against those, from a variety of positions along the political spectrum, who distrust its motivations as much as its conclusions. A sense of surprise, or affront, may be detected in the book, an almost guileless dismay that anyone would challenge such a disinterested pursuit of the truth. The group has been attacked in particular by what Higgins calls the Counterfactual Community – propagandists, conspiracy theorists, believers in ‘alternative facts’ – not least because the Bellingcat method seems so close to that of those who trawl the web in search of their own truths. “Whereas we search the internet for evidence, they search for confirmation” he writes, pointedly.

I’ve written before now in praise of Higgins, calling him the greatest journalist of our times. His story is an inspiring one, his pursuit of truth driven by the need to expose lies (in a book filled with quotable insights, one notable gem is “nothing stirs the online investigative community like fabrications from the powerful”). The book is a fascinating trawl through the online traces that we leave, from those homesick soldiers to the scarcely-believable poison found in far-right enclaves that could very well include your neighbour. It’s a book about the news, but really it’s a detective story, more Sherlock Holmes than anything. The police are baffled and only the gentleman amateur, armed with nothing but logic, can solve the insolvable crime. Perhaps Holmes would not have gone into such great detail about the distinguishing features of Russian ordnance, but only because Watson declined to document this for us.

Higgins notes that the Internet is changing, with some who had left traces for online investigators to track down being more cautious, while others have become all the more brazen, wanting to be found, leading the investigators into a propaganda trap. Bellingcat might be an impossible act to follow, the idealistic product of a particular point in time (though Higgins sees emerging artifical intelligence techniques as something can only strengthen their work). Also the group has, in its journalistic quests, on occasion used less than open sources e.g. paying for leaked databases found on Russian torrent sites. The open and the true are not necessarily the same thing.

All of this is preamble, however. What struck me particularly about the book was its endnotes. Endnotes and footnotes are something else that I written about before now, with particular interest in those notes that cite web links, giving the book a semblance of interactivity. Many non-fiction writers now cite weblinks in their endnotes, often giving the date when the link was last accessed, knowing that in the web world these things are here today and gone tomorrow. I have been editing a book filled with such references, checking each one, shortening the links where I could into something practical, ensuring that they fit rules of style that are, frankly, not always up to the task when it comes to the web world. Print and digital do not mix.

Never have I come across a book that so emphatically makes this point, in terms of its source references, as does We Are Bellingcat. The book has 368 endnotes from an introduction and five chapters. Six are book citations (from four books). Three are journal articles with a weblink. Three give background comment with no link. One is for a TV programme. The remainder – 355 – are web addresses, or URLs, and that is all.

The very sight of them is peculiar: row upon row of unreadable references, beginning with a www and ending with a .pdf or a /. And there are only the links.

Style manuals advise those creating end notes to cite the author, the title of the article or text, the title of the work (e.g. website) from which it comes, any identifying numbering, the date on which it was published, the institution responsible, a page reference if relevant, the URL, and the date accessed. We Are Bellingcat has none of this – bar the URL.

So, yes, there is no indication of when these web addresses were last accessed, or whether they still exist or not. Many of the web and social media pages used by Bellingcat have had a short life, disappearing soon after discovery. The organisation archives most, if not all, of what it finds, but whether these links are as live as they suggest they might be, we can only find by writing them out.

For of course these are printed pages and the links link to nothing (presumably they would work in the Kindle version). Some are easy enough to copy out, but others are simply absurd. Consider note 19 of chapter one, for example:

In the book it runs for seven lines. Only an obsessive, or a blogger writing a review of the book, would ever both to transcribe it. And yes the link still works [accessed 18/02/2021]. There are tools such as bitly that create shortened URLS for you, or Higgins could simply have gone to that Huffington Post web page, used one of the sharing links e.g. that for Twitter, and he would have been given a marginally more serviceable shortened URL: https://www.huffingtonpost.com/jay-rosen/the-people-formerly-known_1_b_24113.html?ncid=engmodushpmg00000004.

We Are Bellingcat was composed digitally and selected links as though creating a web page, where these links would connect the reader to the web world, where the evidence lies (or lay). Its raison d’être is its liveness, not just because it’s the Internet we’re talking about but because the truth is out there, just once click away. Within the text of the book there is further evidence of this idiosyncratic approach to referencing in print. Superscript note numbers are clumsily positioned after words in the middle of sentences, and on a number of occasions there are two superscript endnote numbers together, something I’ve never seen before.

We Are Bellingcat is a fine book, but it doesn’t do fine things for the book. It exposes the print medium as a quaint afterthought, a mechanism by which we used to gather information which makes little sense in a wired up world. The book has its uses, in selling a story, but it is not where the liveness lies. We Are Bellingcat is the antithesis of its subject. It commemorates, but it does not discover. This is where the trail runs cold.

But the book is solid and will live on many shelves. The web world will move on, those incriminating social media posts have probably already gone, web pages that appear permanent will vanish one day, Google will crash and YouTube will disappear. The tiny percentage of the web that is archived can only be done under new URLs, rendering all those links in the book redundant. The digital world is only held together by fragile links, by those endnotes. One day, all that will remain of Bellingcat is the book.

Update:
I must note that, contrary to the conceit of that final paragraph, Bellingcat is very much aware of the necessity of archiving. It has helped establish Syrian Archive and Yemeni Archive with human rights digital documenters Mnemonic, collecting and making available digital content from those conflicts that might otherwise have disappeared and whose analysis may benefit future research and prosecutions (Bellingcat is moving increasingly towards the field of legal evidence, as Higgins’ final chapter describes).