There was a piece in The Times recently in which assorted experts – artists, art historians, gallery owners, critics – were asked to tell us the best way to appreciate a painting. Their responses ranged from the practical (choosing the picture you admire and devoting deep time to it), to the impractical (visit the gallery after hours, examine the backs of paintings to learn more about their composition), to the facetious (artist Maggi Hambling recommended breaking wind as a way of clearing the crowds). What all of them assumed, however, is that to appreciate the painting you would need to up close to the original, in a gallery.

This to me seems elitist, and wrong.

Now, it is always instructive to learn from an expert how to look at a painting. The late Pamela Tudor-Craig (Lady Wedgwood)’s programme for the 1986 BBC series The Secret Life of Paintings, analysing hidden and not so hidden messages in Holbein’s ‘The Ambassadors’, is, for me, one of the most thrilling television programmes yet made. Soon after seeing I went round to the National Gallery (because I was privileged to have my place of work nearby) and studied the painting as intently as the programme had encouraged me to do. But what was the difference, really, between seeing the painting on a screen, with all those artful close-ups reflecting both the mind of the artist and of the art historian seeing what she could see, and the painting itself on a wall?

Paintings can be found anywhere. They are on TV programmes, in books, on posters, on T-shirts, on mugs, on mouse-mats, on the postcards stuck to my kitchen noticeboard. And I do not see what great difference there is between seeing a painting in a gallery or in a kitchen.

Walter Benjamin, in his famous essay ‘The Work of Art in the Age of Mechanical Reproduction‘, writes about the changes in perception brought about by the reproducibility of art. He champions, or at least tries to, the shareability of art in a modern world, using the cinematograph as a prime example, but nothing for him can exactly reproduce the original, where such an original exists (Benjamin’s assumption would appear to be that a film’s original, insofar as it exists or is of consequence, is the studio performance it captures rather than its negative). It is defined by its ‘aura’: “that which withers in the age of mechanical reproduction is the aura of the work of art”. It withers so because

even the most perfect reproduction of a work of art is lacking in one element: its presence in time and space, its unique existence at the place where it happens to be.

I’ve long been troubled by this: by its implied elitism, and by its marginalisation of the observer. Why shouldn’t the mechanical reproduction of a painting be as real the same work in a gallery, if that is what it means to me? The aura lies as much in the observer as the object. 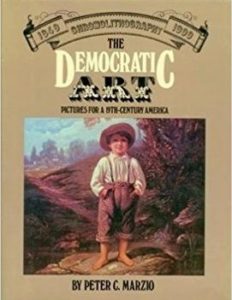 One of my favourite books on art history is Peter C. Marzio’s The Democratic Art: Pictures for a 19th-Century America (1980). Overturning decades, if not centuries, of art snobbery, it considers the powerful effect the popular print – the chromolithograph – had on American culture in the nineteenth century. Art had previously been the preserve of the elect. Now here was a colourful art within the price range of the many, which you could take home with you and make your own. It consequently became the target of great snobbery, as critics condemned both the quality of the reproductions and the supposed cheapening of the appreciation of art through mass reproduction. The subject matter was not always high art, though many American painters of the time had their works reproduced as chromolithographs, reaching a vast new audience in the process. As Marzio writes:

At the peak of America’s Victorian age, the mass-produced color lithograph waved unchallenged as the flag of popular culture … Chromolithography was a technical accomplishment with a vibrant social presence … marked by a faith in fine art, a belief in the power of art to enrich the life of anyone.

Marzio’s book is nearly forty years old, yet it still feels revolutionary. It understands art from the viewer’s point of view – and it does not discriminate between the viewers. It is at one with its subject. Of course we have had art histories since then which acknowledge, and analyse, art’s reproducibility – and which contribute to this by reproducing such works in their books – but the focus is invariably on the artwork as something that has been copied, and thereby changed. Their hearts remain profoundly located in the gallery.

Even Marzio can say, in his conclusion, that, “No one can argue successfully that an original work of art is fully represented by a reproduction.” Well, why not? There is, of course, a special frisson about seeing an original work of art, chiefly because we find such works in places specifically designed to create such a frisson – namely a gallery. The gallery exists only to display. It creates through its exclusiveness an atmosphere of mystery, an aura.

But that aura can be anywhere, if we take the gallery with us. What is important is the first sight of the painting. I have been entranced by paintings on book covers, got to know the artwork well through that association, and only years later seen the original painting in a gallery. So where did the aura lie? Seeing the original is a privilege and a thrill, naturally, because I am that close to the artist. I can stare closely (even at the back of the work, were I to be allowed to do so), I can see the brushstrokes and imagine the hand that made them. It is the image from which all the other images derive. But I still say that the aura – its unique quality – lay first in that book cover, because that it what I saw first, and where the impression was made. The originality, precious though that is for its own sake, is not relevant to the work’s personal significance.

The best way to appreciate a painting is to be surprised by it, wherever you might find it. You need not stare at it for hours (it is extraordinary how much the mind takes in of a painting on a second’s glance). All you need to do is to own it, because by viewing it you have added to your understanding of the richness of things. It has become a part of your personal gallery, your time and space, and whether that first impression was on a book cover, a mug or in the Prado matters not at all. Mechanical reproduction changed availability, but it has not affected authenticity. The uniqueness of art lies in the impression.